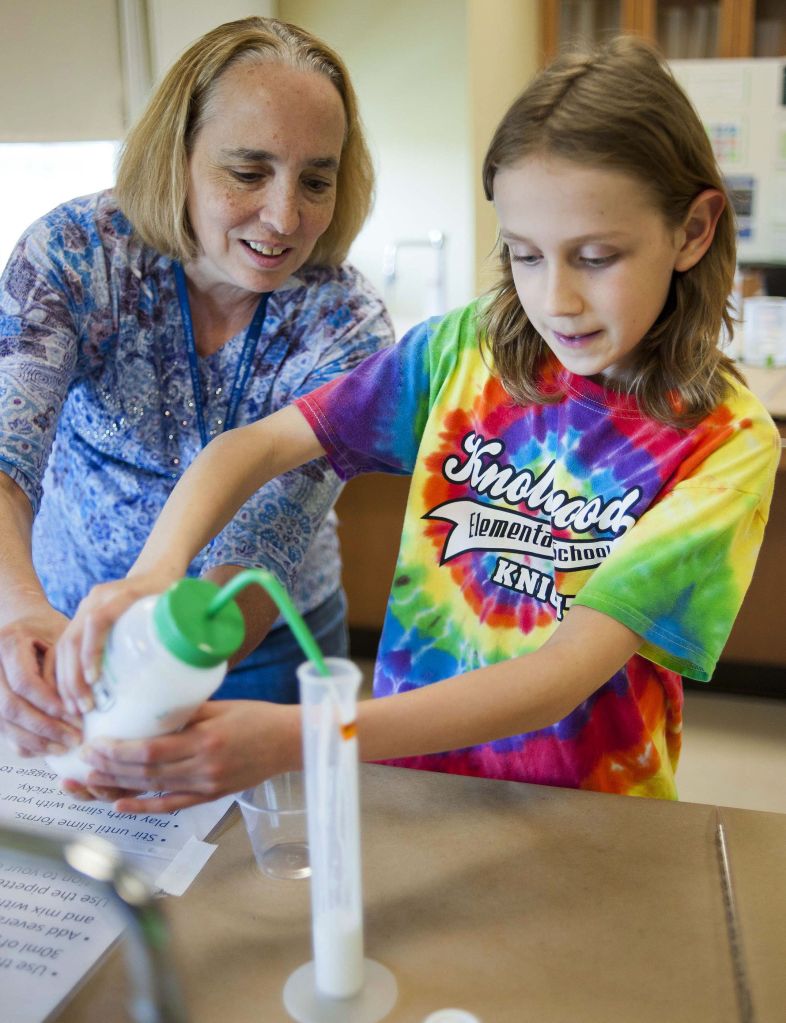 A festive atmosphere took over Friday at the N.C. Research Campus as students assembled and launched rockets, made slime, inspected sunspots and extracted DNA from strawberries.
“They get a chance to do hands-on science, and, more importantly, they had fun,” said Denise Schweiser, a Rowan-Cabarrus Community College chemistry instructor who was helping run the rocket-launching station.
The excitement was all part of the college’s annual STEM Open House, which gave nearly 500 community members the opportunity to take part in hands-on science, technology, engineering and math activities.
At least 50 Rowan-Cabarrus students, faculty and staff rallied to make the event a success, manning booths and interacting with those who showed up. They explained how and how STEM is used in a wide variety of careers and in every day life. Several dental assistant students explained how plaque buildup happens and proper tooth hygiene.
Participants from the school’s cosmetology program explained how they use chemistry while dyeing hair, and digital forensics specialists talked about computer and password safety. The Kannapolis Fire Department explained pulleys
Almost all of the school’s programs were represented, according to Paula Dibley, director of college relations, marketing and communications.
The booths employed computers, photos, models, machines, mannequins and other interactive displays.
Mason Hollar, a fifth-grader at Knollwood Elementary, said he likes science and math, so the open house was especially fun for him.
He bragged about the slime and the rocket he made.
“It made a nice spiral,” he said, as he talked about his rocket.
His grandmother, Patti Burchette, said they’ve attended the event the past few years.
“It gets better every year,” she said.
Xavier French was also a repeat visitor.
The fourth- grader at Hanford-Dole Elementary said he launched a rocket, looked at the sun and learned about hair follicles.
His favorite activity, though, was creating a sculpture of a penguin and an iceberg out of clay.
In addition to learning about the everyday applications of STEM and potential careers, children and adults alike had the opportunity to handle and use equipment such as microscopes, pippettes and petrie dishes.
There seemed to be a particular amount of interest in making slime. Attendees mixed water, glue and borax, as well as glitter and food coloring to create a gooey mixture.
The end product resulted and giggles and groans, as people mixed and handled their slime.
“It’s kinda gross, but it’s fun,” said first-grader Eryn Patterson as she played with her bright purple slime.
“It’s squishy,” she added.