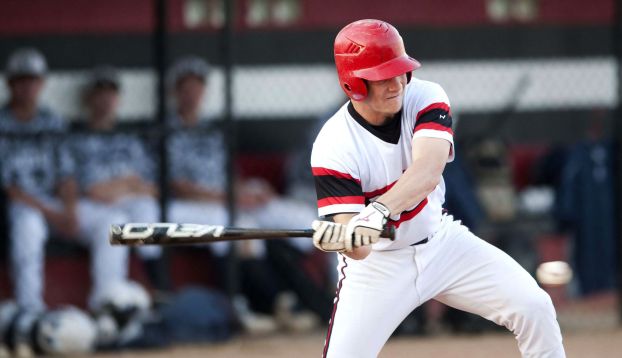 LANDIS — It looked like the scoreboard at South Rowan was in need of medication, but it was accurate.
Hickory Ridge had nine hits and lost 5-2 to a South team that managed just one. And that’s no bull.
It was a Twlight Zone game, so strange that Hickory Ridge starter Collin Sprinkle never allowed a hit but still took the loss.
South’s lone hit was a clutch one — a tiebreaking single by No. 8 hitter Hunter Travis in the fifth.
It’s been that kind of season for the Raiders, who have won some ugly and lost some ugly, but who have won a lot more often than not.
“We keep fighting and rallying in most of our games,” Travis said.
South (13-4, 10-4) will be in the 3A playoffs and is still in contention for the SPC title because it has two games left with frontrunner East Rowan.
South got a complete game from sophomore pitcher Austin “Bo” Corriher (2-2), who struck out five.
“I started out pretty rough,” Corriher said. “But I tried to battle ‘em, and I started pitching better once we put some runs on the board.”
Putting some runs on the board definitely was the interesting part.
“It seemed like every time I looked out there we had runners at second and third, but we couldn’t get a hit at the right time for a long time,” South coach Thad Chrismon said. “The good part of that is we stayed with it. We stayed positive and kept making the plays in the field to stay close.”
Hickory Ridge (4-12, 3-9) took a 2-0 lead in the second inning when Jake Whitcomb and Sprinkle delivered back-to-back RBI singles with two men out.
After that, South squandered all those baserunners it was getting on Sprinkle’s walks.
“Their pitcher had a curve that was nasty, and when he got in siutations where he could use it, he was tough,” Chrismon said.
Sprinkle walked two in the first, one each in the second and third and two more in the fourth.
Still, he maintained his no-hitter, his shutout and that 2-0 lead into the fifth.
Ah, the fifth. South’s fifth was one for the books. There are fifths that are sipped and fifths that are pleaded, but this a fifth that will be talked about for a while.
Sprinkle got the first two outs easily enough, but then he walked Chase Labbe — and Matt Honeycutt — and Bo Corriher — and South had the bases loaded.
A walk to Eric Stowe put South on the scoreboard and a walk to Peyton Penninger made it 2-2.
After five straight walks, no-hitter or not, Hickory Ridge coach Branden Knapp had to turn to his bullpen, and Christian O’Connor was summoned to face Travis.
That’s when Travis promptly whacked a single to left field to score the go-ahead run.
“I knew what my job was,” Travis said. “I knew I had to get a hit.”
The 12th and 13th walks of the night by Hickory Ridge hurlers were then accepted by Eric Goldston and Tyler Fuller, and South’s lead swelled to 5-2.
“You had to go up there ready to hit, but at the same time you had to be patient,” Corriher explained.
Honeycutt, South’s catcher, helped out in the sixth by throwing out a basestealer — his second of the night — and Corriher worked his first 1-2-3 inning in the seventh to bring an end to a wacky adventure.
Chrismon joked that Sprinkle’s unusual no-hitter lasted so long that he was thinking about employing desperate measures.
“I was thinking about announcing to the world that he had a no-hitter to try to jinx him,” Chrismon said.
It turned out OK for South. It’s a weird ‘W,’ but it’s one more ‘W’ nonetheless.
“I thought we worked some good at-bats and showed discipline to take the walks,” Chrismon said. “Defensively, we were good, and Corriher bounced back strong from a rough outing.”