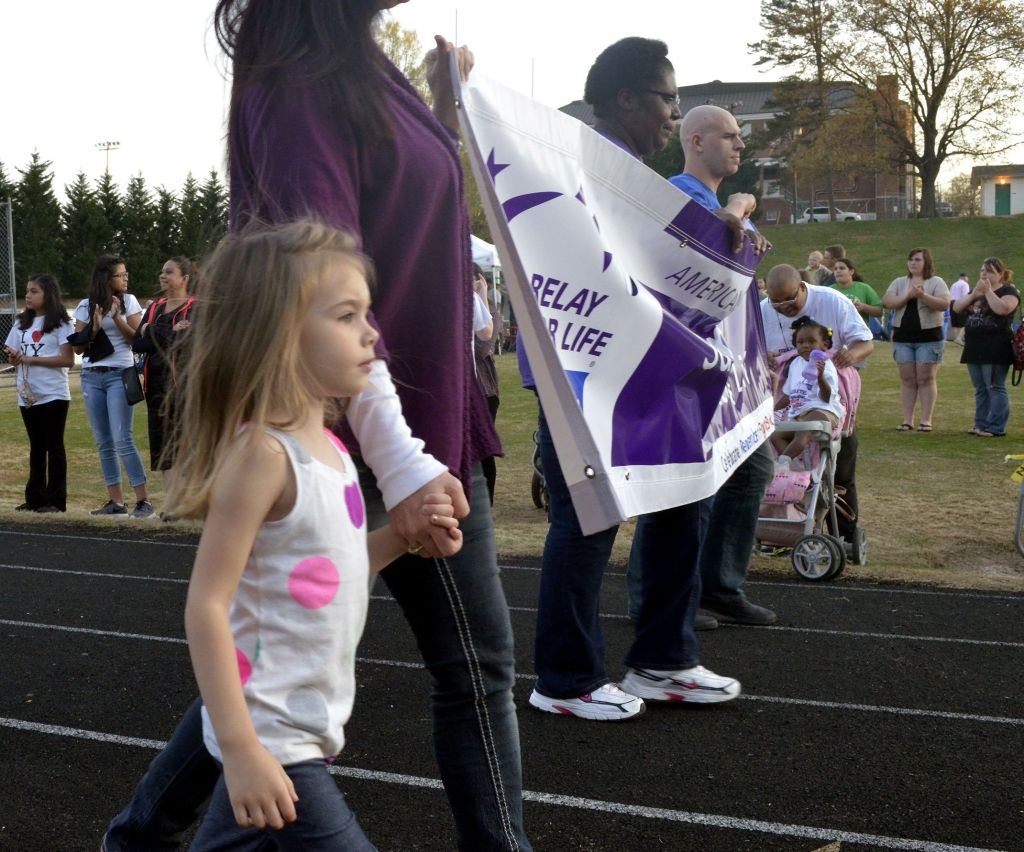 KANNAPOLIS — Cancer strikes all ages, races, families and backgrounds.
And with that in mind, hundreds gathered at the A.L. Brown High School track Friday night for the Kannapolis Relay for Life.
Whether celebrating survival stories, or remembering those who lost their battles with the disease in its many forms, the message that resounded throughout the event was one of determination to fight.
Just ask Kolby Davis, 9, who led the children’s walk to open the evening’s festivities.
Terry Davis, Kolby’s dad, said that, when the boy was less than a year old, an MRI revealed a mass on Kolby’s spine that turned out to be a tumor.
That was 2004. Today, Kolby is a smiling boy who’s looking forward to be 10.
Asked how he feels to be there at Relay for Life, Kolby turns thoughtful. “It’s feeling good,” he said. “Any day that you’re not dead is a good day.”
Confidence and faith brought Jared Rooks, the first survivor to speak, to take the stage just before the first lap of the 12-hour fundraising walk.
Rooks, of Kannapolis, is currently undergoing chemotherapy to fight a recurrence of cancer.
In talking about his cancer battle and his Christian faith, Rooks said he’d just left the hospital yesterday following a days-long cancer treatment.
“I don’t feel like I took chemo,” Rooks said. “You know why? Because I know there’s something better out there that I can put my trust in. Because I have hope, and I have trust in something more than myself.”
Shelby Smith, chair of the Kannapolis Relay for Life, said the event is still growing slowly.
Last year, Smith said, a “monsoon” of rain kept many away.
This year, with perfect weather, Smith said 34 teams had registered, and about 60 kids took part in the children’s walk.
Smith has personal reasons for being a part of Relay for Life, which raises money for the American Cancer Society.
“I’m a survivor too, but I don’t do it for me,” Smith said. She said the event is about bringing families and the community together to battle cancer.
The Kannapolis Relay for Life is also the first such event of 2014 in the district that includes Rowan and Cabarrus counties.
“It’s just the perfect temperature, the perfect atmosphere,” Smith said.
Around the football field, as the survivors and supporters walked the track, many enjoyed refreshments, bought raffle tickets and talked with friends and loved ones.
At one corner of the field, Michele Dutcher, of Asheville, watched as people used paint pens to cover her 2013 Ford Mustang with signatures and messages of hope and love.
The car, named Gwinnivere the Pink Warrior, has been to events in North Carolina, South Carolina and Tennessee, Dutcher said.
Dutcher said she started the project in honor of a friend who is a cancer survivor. Once the car’s interior and exterior are filled with names, Dutcher said, she’ll have a clear-coat applied to preserve the signatures.
“Their loved ones who are on the car will be on it forever,” Dutcher said.
The goal of Relay for Life is to find a cure for cancer, and Rooks said he was confident that day would come.
“I am an advocate of this because I think that everyone should be able to walk in the way of freedom, not to have the life-destroying effect of cancer,” Rooks said.
“We’re all here for the same reason, and that’s to finish the fight,” Rooks said.
For Debbie Trexler and Zona Ritchie, both of Kannapolis, walking with friends in the Relay for Life was an “amazing” experience, but bittersweet.
“I’m a survivor, but I lost people,” Ritchie said. “I wish my daughter could be here.”
Smith said that, although the Kannapolis Relay for Life is smaller than its counterparts in nearby cities, she expects it to grow as the local economy improves and more people learn about the event that’s going on in their city.
“It’s nice to have something in your hometown, to remember the survivors and the people who’ve passed on,” Smith said.
Contact Hugh Fisher via the editor’s desk at 704-797-4244.