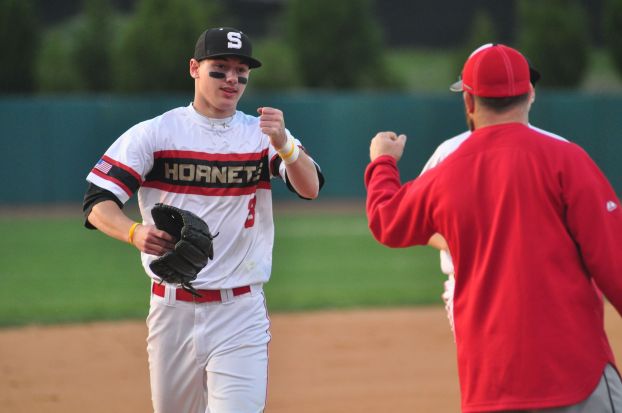 SALISBURY — Things are finally blooming now that warm weather has graced us. The Salisbury baseball team hopes its offense sprouted petals this week.
The Hornets defeated Central Carolina Conference foe Thomasville 15-0 Friday night at Robertson Stadium and it felt good to whack the ball around a bit. With some new blood in the lineup, SHS coaxed 11 walks and put 11 runs up in the fourth inning against a Bulldog team still figuring things out.
Of course, so are the Hornets.
“We’re trying to hit the ball hard and put the ball in play,” Salisbury coach Scott Maddox said. “We’ve struggled all year just hitting the ball and putting it in play. I tell the guys to swing the bat and give themselves a chance.”
After a 10-game losing streak earlier this year, a chance seems pretty hopeful for SHS, who played its third game in as many days.
“We’ve got to make sure we keep hitting,” Salisbury pitcher Riley Myers said. “The reason we were 4-10 is because we haven’t hit. If we pitch it well and score 4,5 runs, we’ll win the next few conference games.”
The Hornets (4-11, 3-3) doubled their win total this week after a 21-2 triumph at Thomasville Wednesday. A non-conference defeat at North Forsyth Thursday temporarily derailed the Hornets.
With North Rowan’s loss to East Davidson Friday, SHS moved into a tie for third in the CCC with three weeks left in the regular season. Salisbury has a home-and-home with second-seeded West Davidson next week.
Catawba commit Chance Bowden led the effort with three hits — all singles — and three RBIs.
It was a easy night for Myers in his second win. Myers, getting some work in after suffering a back injury a few weeks back, only allowed a hit and a walk. He threw only 39 pitches, 30 of which were strikes, but was grateful to be back out there.
“I’m glad to got to throw,” Myers said. “It tightened up a little bit there, but it felt way better than it did.”
The game was called by the umpires in the bottom of the fourth after Harrison Smith’s sacrifice fly plated the last run.
Thomasville looked primed to fight the Hornets only trailing 1-0 after the first two innings. Starter Felix Fernandez retired six of the first nine batters he faced. A pair of errors early on in the third hurt the cause and Myers drove home a run on a sac fly and Steinman singled with Link and Alex Yang reaching on walks in the inning.
SHS batted around in the fourth as Fernandez and the THS bullpen lost touch with the strike zone. No. 9 hitter John Yang singled to start the frame and made it to third after two wild pitches. Zack Anderson relived the starter and walked all four batters he faced. SHS sent 14 to the plate in the fourth when all was said and done.
“We swung it as much as we could,” Maddox said. “The strike zone wasn’t getting as filled, but we did a good job.”
Alex Link and Marcus Corry made their starting debuts in the SHS lineup. Link singled and walked while Corry scored a run and walked with the bases loaded.
Dwayne Taylor had the lone hit for Thomasville (1-10, 0-6).