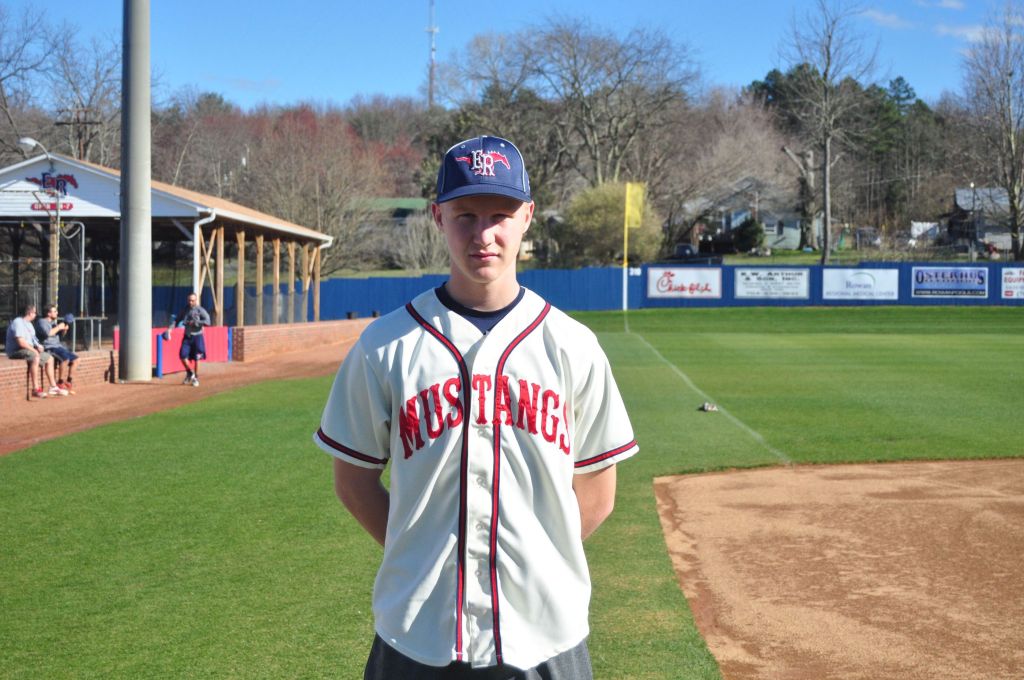 GRANITE QUARRY — East Rowan pitcher Harrison Bell said he started Thursday’s non-league game at Staton Field with jitters because he didn’t know anything about Mount Pleasant.
Bell would’ve been more jittery if he’d seen the Tigers’ stats. They were batting .337 as a team, had an ERA of 2.28 and a record of 8-3.
No one knew it at the time, but when the big redhead escaped a mess in the top of the first — with the help of a call that had Mount fans yelping in dismay and his own fastball — this one was over.
East put nine runs on the scoreboard in the bottom of the first, rode Bell (2-2) for four shutout innings and buried Mount 14-0.
East (11-6) isn’t 14 runs better than the Tigers. If they played again Saturday, Mount might win, but odd things happen in baseball.
For one night, at least, the Mustangs could do no wrong, Mount could do no right, and East didn’t even need to bat in the fifth.
“When a team executes the way East executed at the plate, no one’s going to beat them,” said MP coach Tommy Small, who is a former Mustang himself. “Wewalked too many, gave them extra outs, and they swung the bats.”
East leadoff man Michael Caldwell, No. 3 hitter Ike Freeman and No. 8 batter Mason Doby had perfect nights at the plate.
Luke Setzer was retired once, but it was a vicious liner for a double play. That was two of the 12 outs that Mount managed to get.
“We got some confidence from this game,” Setzer said. “Harrison hadn’t pitched in a while, but once he settled in, he threw great.”
Bell hit the first batter he faced, but when a pickoff throw got away, East first baseman Samuel Wyrick sped after the ball and fired a strong throw to second base.
Wyrick’s hustle made it reasonably close at second, although Holmes still looked safe from the bleachers.
The call was out. Small argued briefly. Fans howled. Bell breathed a sigh of relief. A walk and a single followed, but Bell got out of the inning unscathed by striking out Justin Green and E.J. White.
“I saw my fastball was good enough to get outs,” Bell said. “That’s when my confidence picked up.”
In the home first, East put on a clinic as far as hitting backside against a lefty working away. Hits screamed to the opposite field and 13 Mustangs batted.
The two key hits were a two-run double to right-center by Setzer and a bases-clearing triple by Freeman down the right- field line.
“About all I see are curveballs,” Freeman said. “I went up there thinking backside, didn’t try to do too much, and I got the triple.”
Bell mowed down the Tigers 1-2-3 in the second and third and pitched around two walks in the fourth.
Alec Hamilton pitched the fifth and maintained the shutout with the help of Caldwell, who turned a liner into a double play.
“I really liked our approach at the plate and Bell pitched good after starting out a little rough,” Hightower said. “It’s not like Mount’s guys didn’t battle at the plate. They set a world record for foul balls, but it was just our night.”
It was the first non-conference win for East.

Charlotte jumps up to sixth in the East after…