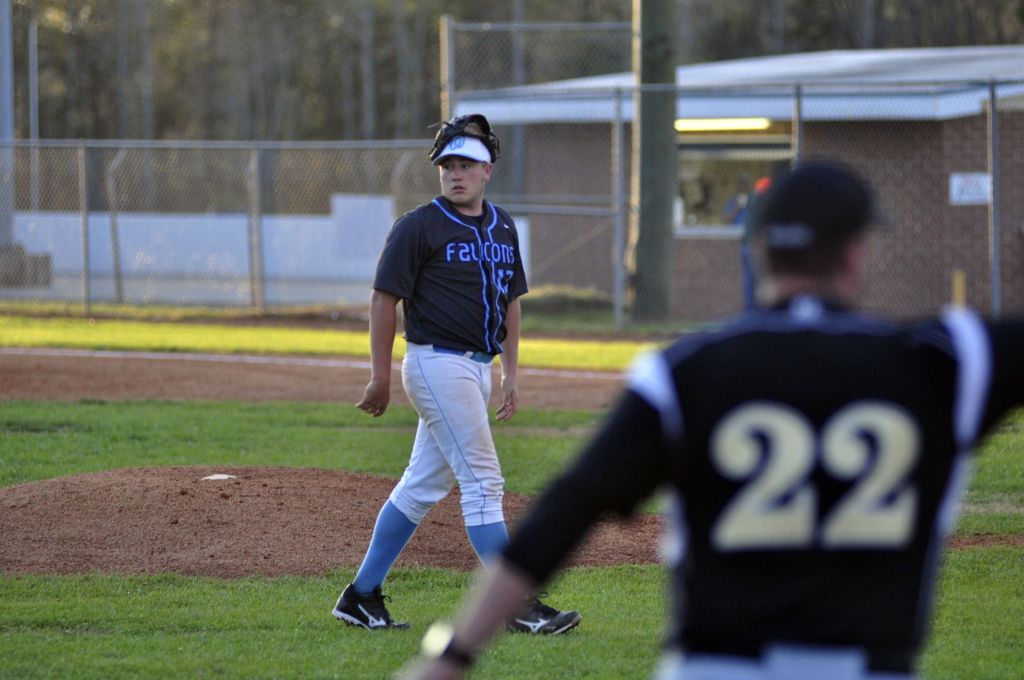 MOUNT ULLA — West Rowan’s Michael Ball pitched a near-masterpiece Thursday night, then had nothing to say about it.
You couldn’t blame the Falcons’ workhorse righthander for hangingout the “Do Not Disturb” sign after he struck out 11 batters and allowed no earned runs against visiting Concord — all in a losing effort.
“Michael gave us a chance to win,” West coach Chad Parker droned after the Falcons suffered a costly, 3-2 SPC loss. “We’ve just got to take better care of the baseball. Plain and simple. We’ve got to play better defense.”
West (7-6, 6-5) played defense like it was someone else’s job and dropped its third straight league decision. The Falcons, who never led, committed five errors in the first four innings and squandered a memorable pitching performance.
“(Ball) threw as well as he has all season,” said junior shortstop Jeremy Simpson. “It’s another tough loss for him.”
Ball was outdueled by Concord junior Tyler Thomas, who navigated his way through a series of minefields and emerged victorious. The lefthander induced 10 groundouts and adjusted well to the plate umpire’s pyramid-shaped strike zone — it was wider at the bottom— finishing with four strikeouts and a walk before he was chased in the seventh inning.
“Tyler wasn’t as sharp as I’ve seen him,” winning coach Jaymie Russ said after Concord (6-10, 5-8 SPC) dropped West three-and-half games behind frontrunner East Rowan with five to play. “But he still threw a great game. He did what he knew how to do. He became the bulldog he’s capable of being.”
Thomas, a burly side-winder in a linebacker’s body, was to a staked to a 1-0 lead before he threw a pitch. Concord’s Matt Panner opened the game by reaching on an error and was promptly sacrificed to second base. When No. 3 hitter Chance Clark whipped a groundball double down the left-field line, the Spiders had the early edge.
“This shouldn’t be happening,” Parker said. “Guys have to take ownership of making plays. We work on this stuff every day. They’ve got to do it in the game.”
Concord nourished its lead with another unearned run in the top of the third. Panner again led off by reaching on a misplayed grounder and — after Ball had him picked off — advanced to second when a throw from first baseman Tyler Poteat hit him and caromed into the outfield.
Ball struck out Concord’s next two batters but was victimized when Cody Franklin lashed a two-out, run-scoring liner into center field.
West answered in the last of the third when it loaded the bases with none out and scored its first run on catcher Michael Pinkston’s sac fly to deep left. Thomas escaped further damage by retiring West cleanup hitter Nick Collins and slugging third-baseman Juan Garcia.
“We put runners in scoring position,” said Simpson, “but didn’t get the timely hits. You need those to win.”
Instead, the Falcons stranded six runners in scoring position and continued to play swiss-cheese defense. Concord made it 3-1 on Ball’s throwing error in the fourth inning. And after Hunter Bernhardt’s groundout plated Noah Teeter with the game’s final run, West left Poteat high-and-dry at third base when Caleb Link hoisted an inning-ending flyout to right.
“That’s just pitching out of trouble,” said Russ. “It’s taking advantage of what’s there for you. West Rowan’s too good not to take advantage of every situation you can.”
Ball, meanwhile, set the Spiders down in order in both the sixth and seventh innings and retired nine of the last 10 hitters he face. Thomas retired 10 straight before he withered with two outs in the bottom of the seventh. Link pumped a two-out single to right — on a 3-2 pitch, no less — and motored all the way to third when Simpson drilled a 1-2 fastball into right-center filed. That’s when Russ decided Thomas’ 103-pitch evening was over and reliever Will Horsley was summoned with the potential winning run on second base.
“I just wanted someone to hit a fastball hard and let me score,” said Simpson. “I was ready.”
So was Horsley, who got Pinkston on a game-ending tapper back to the box.
“We had our opportunities,” Parker concluded. “We just didn’t make it happen tonight.”