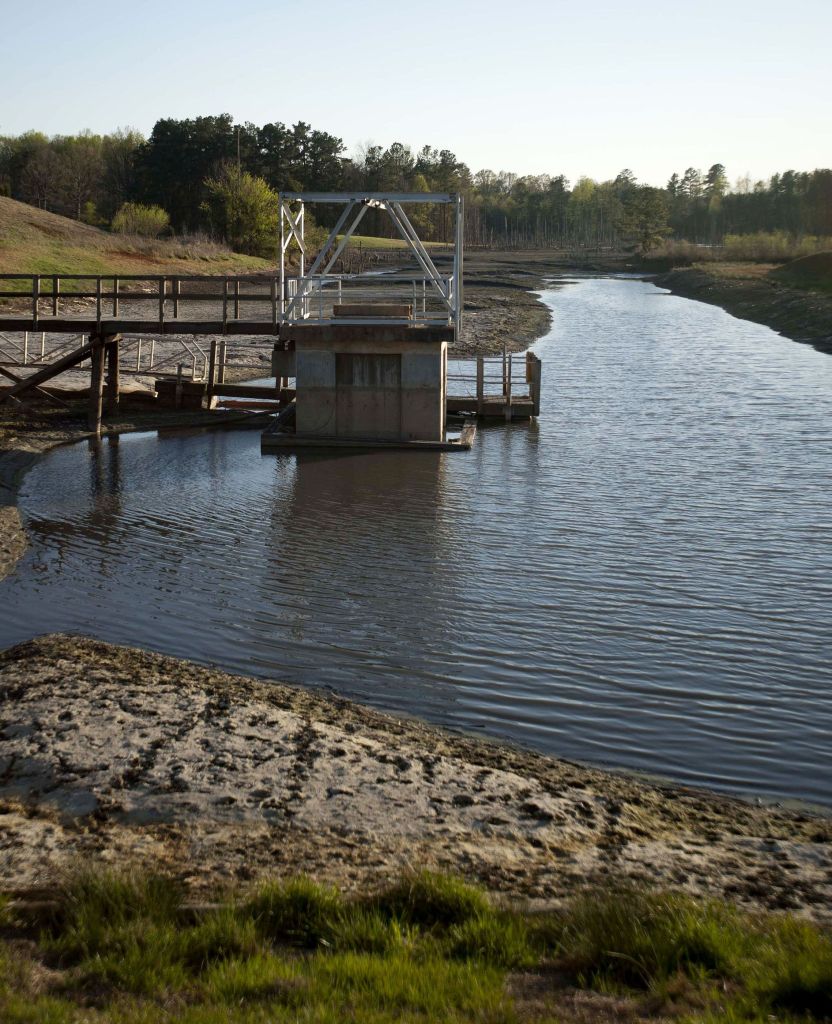 In an effort to ease concerns about coal ash ponds, Duke Energy welcomed local leaders to Buck Steam Station on Thursday to explain how the facility deals with its leftover ash.

Spurred by the recent ash release in the Dan River, Duke Energy is “taking another look at all our ash basins because we do not want that to happen again,” said Paul Newton, president of Duke Energy North Carolina.

He said the Dan River accident was caused by the “sudden failure of a metal pipe.”

Before the new facility was built, however, Duke Energy used coal to heat water.

“The byproduct of burning coal is ash,” said Al Smith, general manager of plant retirement and demolition, as he led a tour of leaders from Spencer.

Until the 1970s, fly ash was released into the air. Now, it is captured for disposal.

The Buck Steam Station disposed of its fly ash by dumping a mixture of ash and water into a series of three ponds.

Each one is at a slightly lower elevation than the one before it. As the mixture makes its way through the ponds, it separates and the ash settles out.

Even from the very beginning, the ponds “accommodate the vegetation very nicely,” Smith said, adding that you can see a “stark difference as the water moves downstream.”

The final basin, called a polishing pond, is where the water quality is monitored before it is released into the Yadkin River.

“This is our control point that makes sure we’re only putting clean water back into the river,” Smith said.

“By the time it goes into the river, it’s perfectly clean and clear,” he added.

Smith said that the biggest challenge at that point is managing pH levels in the water so that it’s “compatible with the level in the river that’s receiving it.”

Although the plant no longer burns coal, the four basins are still semi-active, meaning that they no longer receive ash but do still have some water flowing through them.

Newton said Duke Energy is working on short- and long-term plans for ensuring the safety of waterways near the plants.

Duke officials made sure Buck Steam Station didn’t have any pipes similar to the one that failed on the Dan River, and they also checked the condition of all concrete pipes. They also had a third party give another perspective on conditions of the basins.

Newton told attendees that he had a “very high level of confidence” that Buck Steam Station’s dams are stable and safe. He said the long-term plan consists of working on a “closure plan for all our ash basins in North Carolina” and that by the end of the year, they should have an “ash basin closure strategy.”

Ash can be recycled for beneficial reuse such as in concrete products. It also can be moved to a lined landfill or structural fill. The basins can be capped, or covered, in the current location.

Every site is different, and Duke has yet to determine the method for closing Buck Steam Station’s ash ponds.

The coal plant was fully retired in April 2013, and is in the process of being decommissioned, which is a multi-year process that involves deconstructing the plant, in addition to closing the basins.

“Once we’re finished, it will almost look like a pasture,” Smith said.

“Spencer is the only municipality that touches the river,” Spencer Alderman Mike Boone added.

After the tour, Alderman Reid Walters said Duke Energy’s coal ash basins are one of the biggest issues the community faces. “This particular plant is closest to our community,” he said.

“I’m very comfortable with how it’s laid out,” he said.