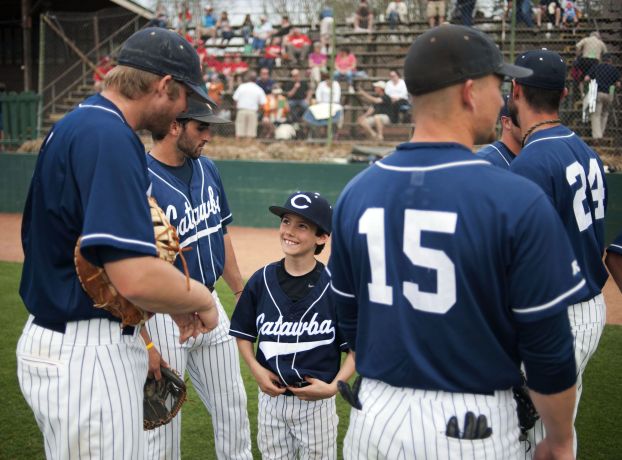 SALISBURY — Out here, they call him “Big Puma.”

As the Catawba College baseball team goes through its pre-game paces taking batting practice, stretching, fielding grounders and pounding pepper against a side wall, 9-year-old Caleb Stewart is there with the players, doing everything they do.

He wears “34,” the number his dad wore when he played baseball in Texas, and also the number of Hall of Fame pitcher Nolan Ryan. Caleb’s dad has told him all about Ryan’s exploits on the field.

When game time nears, Stewart joins several of the guys in pushing the batting cage off the diamond. During the team prayer in short right field, Big Puma — all 60 to 70 pounds of him — kneels in a circle with the other players.

Pitcher Shaefer Shepard and outfielder Mario Parisi place their arms around Caleb during the quiet gathering. Later, Caleb trots out of the home dugout and lines up with the rest of the team along the first-base line for the national anthem.

The Indians go on to win their game 4-1 against conference foe Mars Hill. They also sweep the next day’s doubleheader. In fact, ever since they “drafted” the Big Puma as a shortstop, the Catawba College Indians have turned their season around.

The team knows playing baseball games is easy compared to living with cystic fibrosis, as Big Puma does every day.

Since starting the season 1-7, the Indians have gone 23-7 (not counting Wednesday night’s game), charging into second place in the South Atlantic Conference.

Caleb Stewart’s hanging out with the team at practices and home games coincides with the turnaround.

The Indians have given him his own locker in the fieldhouse and a complete set of practice jerseys and uniforms, down to the pinstripes. At home games, he serves as the Indians’ bat boy.

“It’s probably been as good of an experience on our side as it has been for him,” Catawba College Coach Jim Gantt says. “… It makes us understand the privilege it is to play baseball every day, especially in college.”

Gantt is persuaded that Stewart has something to do with his Indians playing better. He thinks being around Caleb changed the team’s mind set and showed them playing baseball was about relaxing, having fun and doing the things you can do.

“I don’t think it’s a coincidence,” Gantt says. “Once he started coming out here, you realize running home to first isn’t that difficult.”

Caleb has liked everything about the experience and says he can’t choose one thing over the other as his favorite.

Stewart is a third-grader attending Shady Grove Elementary School in Davie County, where he plays Little League baseball for the Nationals. His father, Adam, coaches the team, and Caleb plays shortstop and first. He also has tried pitching lately.

Caleb runs, throws and hits like any other 9-year-old kid. He actually might be better than most. Growing up, he also has ridden sheep and miniature bulls in rodeos, besides playing basketball and baseball.

But away from all of his activities, Caleb goes through 30 minutes of respiratory therapy on a machine twice a day. It helps to shake up his lungs and keep everything loose.

He also depends on a nebulizer twice daily, filled with two different types of medicine.

“His lung function is very good,” says his mother, Shea Stewart, a Catawba College graduate who looks on the steps they take daily as prevention and maintenance against what could happen.

The family found out what could happen 13 months ago, when Caleb started complaining about a pain in his side.

Doctors feared his appendix had ruptured, and he was taken by ambulance to Wake Forest Baptist Medical Center in Winston-Salem. They discovered a blockage in Caleb’s intestines from all the mucus caused by his cystic fibrosis.

He had surgery to remove his appendix and clean out the blockage. For a week in the hospital, he was wrapped in feeding tubes. The medicine he was receiving was making him sick, he reacted poorly to morphine, and thick mucus also was blocking the channels in his pancreas that would normally carry enzymes to the intestines to help digest food.

All this time, Caleb couldn’t eat solid food. His doctor only allowed him to leave the hospital when he did because his family had tickets to see the Harlem Globetrotters in Winston-Salem one night.

Shea Stewart says she probably was in denial for the eight years leading up to Caleb’s hospital stay. She and Adam knew the Delta f508 gene was found in Caleb when he was four months old, but he never seemed to show any of the harsher symptoms of CF.

About 70 percent of the children with CF have the disease because they inherited the mutant Delta f508 gene from both of their parents. CF affects more than 30,000 kids and young adults in the United States.

The genetic disorder affects the lungs and digestive system and makes children who have it more vulnerable to repeated lung infections.

As he participated in all the activities his peers, sister and two brothers did, Shea Stewart says they probably pushed the early CF diagnosis into the background as much as possible.

“We needed to be more proactive in keeping him healthy,” she says. He’s the epitome of healthy, to look at him.”

After his hospital stay, Caleb was having to go to Brenner’s Children’s Hospital weekly for checkups. (Now he has to return every three months.)

Doctors also did more testing at Johns Hopkins University Medical Center in Baltimore, which led to their finding in Caleb a second CF gene — one which only 134 people in the national CF database have.

Shea Stewart says it’s difficult to develop a drug for only 134 people, or know how that rare gene reacts with the Delta one.

The first three to four months out of the hospital, the Stewarts might have been overly protective of Caleb, Shea Stewart acknowledges. They made sure — and still do — that he doesn’t drink or eat after other people. They kept him inside on cold days and away from anybody with a hint of a cold.

“The first little cough he gets, I become paranoid,” Shea says.

Shea decided her son had to give up rodeo, where the competition arenas are filled with dust. But she and Adam also realized Caleb should keep on being as active as possible.

Team Impact aims at improving the quality of life for children while providing life lessons for college athletes.

“I didn’t realize they would do everything they’ve done,” Shea Stewart says of Team Impact and Catawba College. “We’ve just been blown away.”

Team Impact and Catawba set up a draft day in which Gantt announced on a video and in a press conference-type atmosphere that his Indians had chosen a new shortstop for its team — Caleb Stewart.

From that day forward, Caleb was considered a member of the Indians. Staff member David McDowell put together a 5-minute You Tube video titled, “Catawba College Drafts Caleb Stewart,” which has logged more than 800 views.

The video documents Caleb’s receiving a Catawba jersey signed by every member of the team. It shows the nameplate over his locker and his throwing out of the first pitch during one of the home games.

First baseman Paul Kronenfeld, thought to be the player who gave Caleb the “Big Puma” nickname, says Stewart has a great swing, while also looking pretty smooth at shortstop.

To the games and practice, Caleb brings a bag filled with his regular glove, a first baseman’s glove, power drinks, bats and jerseys.

“I think if it were up to Caleb, he would be with them every day,” Shea Stewart says.

But his 12-year-old sister, Salem, also is busy with junior Olympic volleyball. His other two brothers, 10-year-old Baylor and 7-year-old Kason play baseball, too, so fitting everything into the family schedule requires a divide-and-conquer approach by the parents.

Shea Stewart says her son is shy and quiet, but when he returns home after being with the Catawba baseball team, he can’t stop talking.

The Indian team members are talking about shaving their heads April 19 in relation to a fund-raising night for cancer. Caleb wants to shave his head, too.

At first, the Stewarts felt a little uncomfortable for Caleb to be participating in Team Impact. They thought children sicker than Caleb should be given the chance ahead of him.

But Karlson, Caleb’s doctor, said it wasn’t about who was sick now, but it should be about Caleb’s being able to enjoy life to the fullest while he can.

“We’re just overwhelmed,” Shea says. “For these guys to be so young and take to him like they have — we just can’t thank them enough.”

A Red Sox scout also heard about Caleb’s story, saw his video and left a kind note and a Red Sox hat for him at his locker.

Before the Indians take the field at Newman Park, the starters gather in a group near first base with Caleb in the middle. They all repeat a short rally cry, disperse to their positions, and Big Puma returns to the dugout to take a spot with the guys along the front rail.

Caleb’s big wish is for his Catawba College teammates to see him in action in Little League.

“I don’t think these guys realize what an impact they’re having on a little boy,” Shea says.

SALISBURY — The word you kept hearing Tuesday morning at the official debut of the Frontier Coffee Shoppe was “therapy.”... read more