Santana impressive for Braves in debut 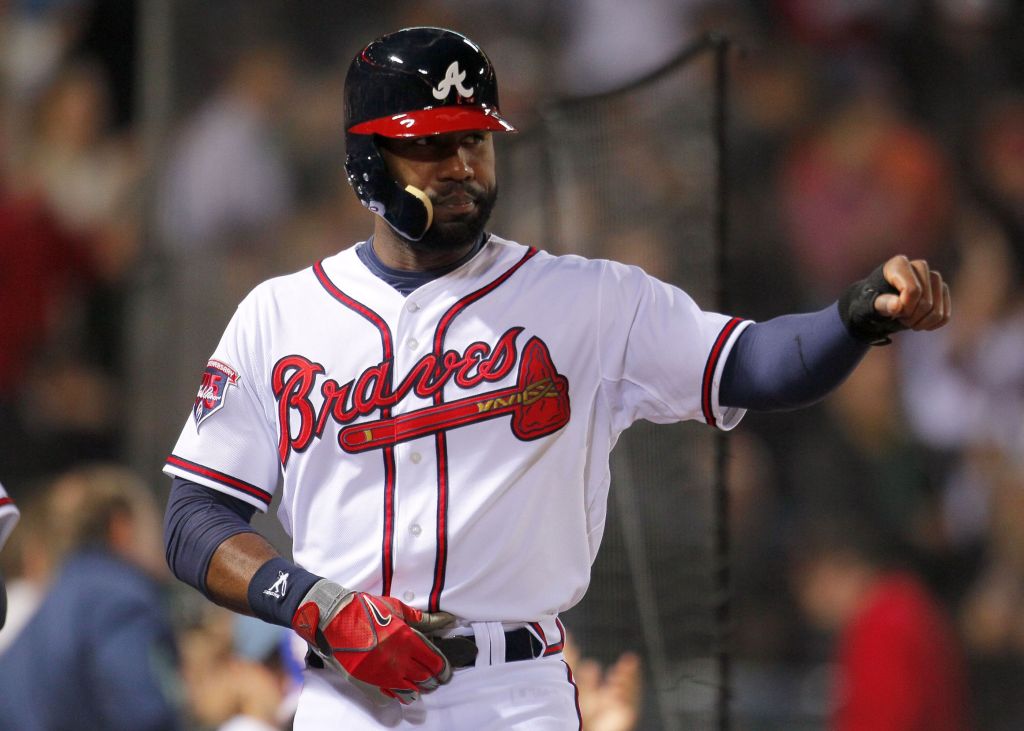 ATLANTA — For Ervin Santana, throwing strike after strike was even better than a no-hitter — especially when his impressive command came in his Atlanta debut.
Santana allowed only three hits over eight scoreless innings, Jason Heyward homered and drove in two runs and the Braves held off the New York Mets 4-3 on Wednesday night.
Santana’s first 20 pitches were strikes. He threw only one ball in his first three innings.
“That one was close,” he said with a smile before adding “That’s all right.”
Santana threw a no-hitter with the Angels in 2011.
“This is better than a no-hitter,” he said. “When you throw strikes all the time, that means you’re in control of the game.”
Mets manager Terry Collins said he could name only one pitcher who threw so many consecutive strikes.
“(Roy) Halladay’s about the only guy I’ve seen,” Collins said. “We chased some balls out of the zone early, which helped (Santana) a little bit.”
The Braves’ bullpen almost blew a 4-0 lead in the ninth.
Jordan Walden walked Eric Young Jr. and gave up a one-out single to David Wright. Craig Kimbrel walked Curtis Granderson to load the bases before striking out Lucas Duda. Juan Lagares drove in two runs with a single, and Travis d’Arnaud added a run-scoring single before Kimbrel fanned Ruben Tejada for his fourth save.
“I’m more frustrated for giving up somebody else’s runs and making it close,” Kimbrel said.
Santana (1-0) was sharp from the start, throwing 28 strikes in his first 29 pitches. He finished with six strikeouts and no walks. He said he didn’t expect to have such strong command.
“Honestly, no. In the bullpen I was all over the place,” Santana said. “I just stepped over the line and focused and threw strikes.”
Santana signed a $14.1 million, one-year contract with Atlanta after the Braves lost starters Kris Medlen and Brandon Beachy to season-ending elbow injuries last month. He pitched like he belongs near the top of the rotation as he threw only 88 pitches, 65 for strikes.
Zack Wheeler (0-2) allowed four runs on eight hits in five innings for the Mets.
Heyward took a 0-for-22 slump into the game and was hitting only .107, with three hits in 28 at-bats. He doubled his hits total with the homer and two singles in his first three at-bats.
Heyward led off the first inning with an 11-pitch at-bat against Wheeler before pulling a 3-2 fastball over the wall in right-center for his second homer.
“It’s a tough way to start the game, going that deep into the count and him hitting a home run, but it was a good at-bat for him,” Wheeler said. “He just came out on top on that one.”
The Braves added three runs off Wheeler in the fifth. Evan Gattis doubled and scored on Heyward’s single to right field.
Santana, who slapped a single to right for his fifth career hit, and Heyward scored on Freddie Freeman’s single.
Each team had defensive highlights early in the game.
In the first inning, Lagares raced back to make a leaping catch of Freeman’s drive at the wall, his cleat leaving a rip in the cushion.
Shortstop Andrelton Simmons showed his Gold Glove form in the second. The shortstop went to his right to field a grounder by d’Arnaud before slipping, hopping up to one knee and throwing out d’Arnaud at first base, with Freeman stretching for the throw.
An excited Santana pumped his fist, shouted and pointed at Simmons.
Santana celebrated with another fist-pump after Heyward, sprinting toward the right-center gap, ended the sixth by catching Wright’s drive before falling on the warning track.
NOTES: Braves LHP Luis Avilan, who left Tuesday night’s game with a hamstring cramp, had no problems throwing in the bullpen before Wednesday’s game and said he’ll be careful to remain hydrated in cooler weather. … CF Jordan Schafer was 0-for-3 in his first start of the season. Manager Fredi Gonzalez said B.J. Upton, hitting .138, will be back in the lineup on Thursday. … Braves LHP Mike Minor (sore shoulder) and RHP Gavin Floyd (elbow surgery) are scheduled for their next rehab appearances on Sunday. … RHP Pedro Beato was optioned to Triple-A Gwinnett to clear a roster spot for Santana. … Braves RHP David Hale will face Mets RHP Jenry Mejia in the final game of the series on Thursday night.