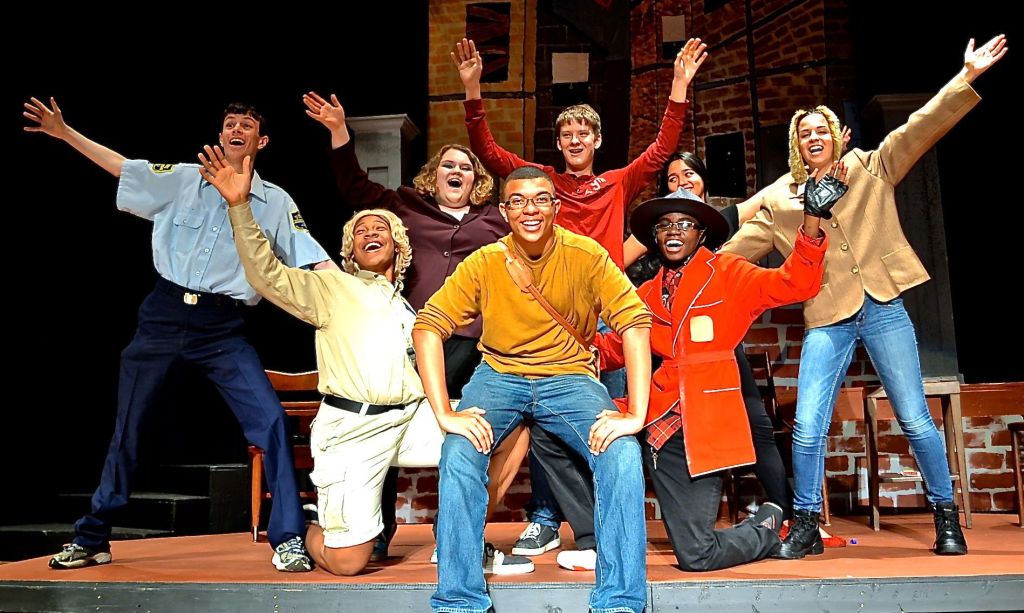 Anyone familiar with the work of Pulitzer Prize-winning playwright David Mamet might be surprised to learn that he also wrote three children’s plays. One of them, “The Poet and the Rent,” along with Christopher Durang’s “The Actor’s Nightmare,” opens Thursday night at Salisbury High School and runs through Saturday.
“It takes dozens of people to put on a successful show, from actors and backstage crew to folks who are willing to loan or build props, costumes, and set pieces,” said Debbie Hubbard, Salisbury High School theater teacher. “We have a strong and vital relationship with the downtown Salisbury community and businesses, and we are grateful for their continuing support”.
“The Poet and the Rent,” a slapstick, pie-in-the-face comedy follows David, a young poet who is behind in his rent and about to be evicted when he improvises poems for money in the park. He is scorned by the public, robbed by thieves who talk him into joining them, apprehended by the police and jailed. Once there, he is visited by a woman who has heard his poems. She’s an ad executive who offers David a job writing ad copy for “Wacko,” noxious gook for cars.
Faced with his first existential choice, he must decide whether to languish in jail or sell his poems to pay his rent.
Folks who know the plays of Mamet will be pleasantly surprised by this show. It has all the hallmarks of his well-known writing style — or, as it is known, Mamet speak — in a children’s show package, and there’s even a moral to the story.
In “The Actor’s Nightmare,” an absurdist comedy, we meet George, who wanders casually on stage and is informed that one of the actors, Eddie, has been in an auto accident and he must replace him immediately.
No one is sure what play is being performed, and George, who isn’t even sure what his name is as he’s being called several different names by different people, seems to find himself in the middle of it all.
As he fumbles through one missed cue after another, the other actors shift plays. In the closing moments of the play, he rises to the occasion and finally says the right lines, whereupon make-believe suddenly gives way to reality.
“I wanted to give the students a challenging play that they could sink their teeth into. I have some very talented actors and actresses, and I knew they could get the concepts of absurdism,” Hubbard said.
Durang’s play was inspired by dreams actors and performers often have in which they are about to go onstage and cannot remember their lines or rehearsal instructions. Durang himself had an actor’s nightmare after performing in this play. He dreamed he could not remember any lines, could not find his script and when he did find the script it was gibberish to him.
The ensemble cast of the “Poet and the Rent” consists of Tarik J. Woods as the poet; Quson Brown as Aunt Georgie, a camp counselor; Justin Cousin as Sgt. Albert Pressman, a mountie; Calissa Anderson as Kodiak Prince, a wonderdog, the landlord, the factory owner and Gene, a thief; Anna Farfan as the girlfriend; Zyaria Smyre as Boots, a thief; Blake Ingram as Spuds O’Malley; a cop and Sarah Jove as the Wacko woman.
The Actor’s Nightmare cast includes Bobby Johnson as George; Brie Unsell as Meg; Sarah Jove as Sarah Siddens; Calissa Anderson as Ellen Terry and Tarik J. Woods as Henry Irving. Crew members Brooks Burris, Isaac Jeans, Jonathan Barbee, Isaiah Delgado and Maleik Tucker round out the group.
The “Poet and the Rent” and “The Actor’s Nightmare” run Thursday-Satruday at Salisbury High School at 7 p.m. each night. Tickets are $5 and may be purchased at the door.
For more information, email Hubbardpastoredj@rss.k12.nc.us