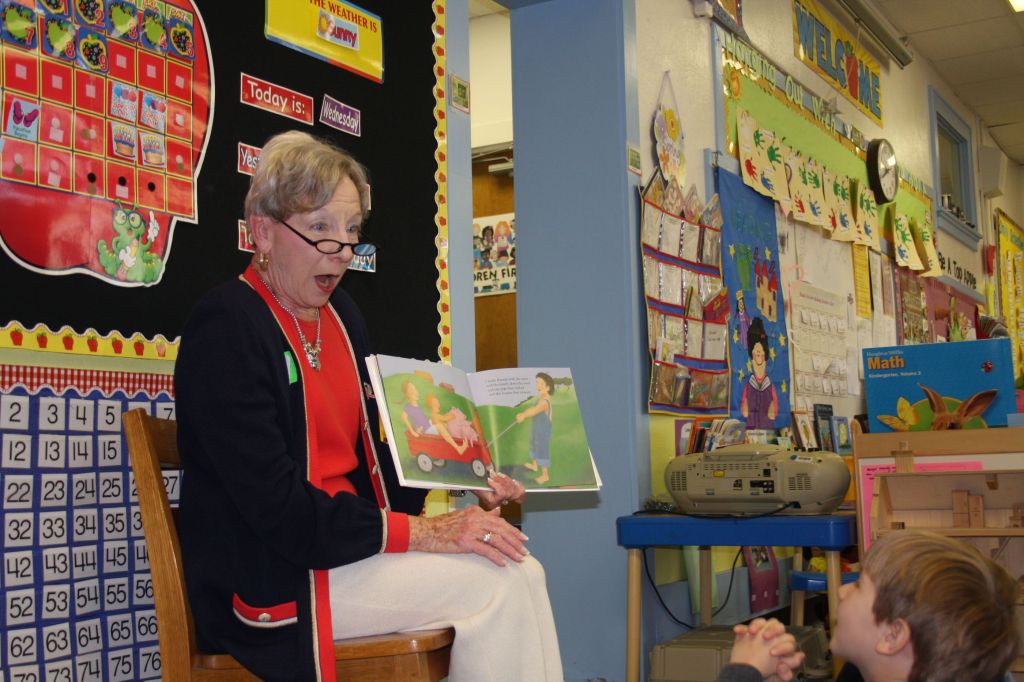 Children love to hear a good story, and the “Read to Me Program” from Smart Start Rowan celebrates the love of reading.
As part of the observance of the Week of the Young Child, April 6-12, Smart Start board members set out around the county to read to children at local childcare facilities and in N.C. Pre-K classrooms.
On Wednesday, Martha Baker, Smart Start’s board chair, traveled to Woodleaf Elementary School to read to children in Stacy Whitley’s Pre-K classroom.
“We wanted a fun way for our board members to be engaged with the groups we serve,” said Laura Villegas, Smart Start’s director of programs. “Everybody has fond memories of a favorite children’s book.”
Baker surely made some fond memories as she read Wednesday morning. Baker and Amy Brown, Smart Start’s executive director, were welcomed by Susan Herrington, Woodleaf’s principal, Whitley and Deborah Mattox, assistant teacher in the Pre-K class.
Herrington said that Woodleaf just completed a $13,000 renovation of its N.C. Pre-K site in order to receive licensure — a new requirement going into next school year.
“It makes a world of difference to these children,” Herrington said of the program. “It’s just a joyous place. It’s a paradise for small children.”
The brightly decorated, expansive classroom most certainly was. Each one of the 18 children introduced themselves to Baker before she started reading, then sat quietly and attentively as she read “Old House, New House” by Phillis Gershator.
Baker admitted later she’d picked up the book from Smart Start the day before so she could practice. A mother and grandmother, Baker proved to be a reader extraordinaire.
“Let’s see what happens next,” she said more than once.
The children clapped enthusiastically when the story ended.
“You can come any time to share stories with us,” Whitley said.
“This made my day,” Baker told the children.
She was visibly touched when Patricia Rose Allen came up to give her a hug, then presented her with several pieces of art she’d made in the art center — a popular stop for these students.
Brown said she was pleased that more than half the board members took time to read in classrooms this week. Five staff members read as well. In each classroom, Smart Start donated each book that was read, along with a bookplate that included the board member’s name.
Brown was slated to read later in the week at North Hills Christian School. She picked out “Sleep Little Angel,” by Margaret Wise Brown. She said that Brown’s “Goodnight Moon” was one of her son’s favorite books.
Board member Jason Walser was also scheduled to read later in the week. He read to his own children, now 10 and 12, and became a Smart Start board member when they were in child care.
“One of the things we don’t often talk about is that strong male role models are missing from some of these children’s lives,” Walser says. “It’s important to see males engaging with children, and I’m happy to help whenever I can.”
Brown says she has received good feedback from board members about how much fun they had in the classrooms and how glad they were that they participated.
Working with children, Brown says, is what Smart Start is all about.
Baker, the reader extraordinaire, definitely agrees.