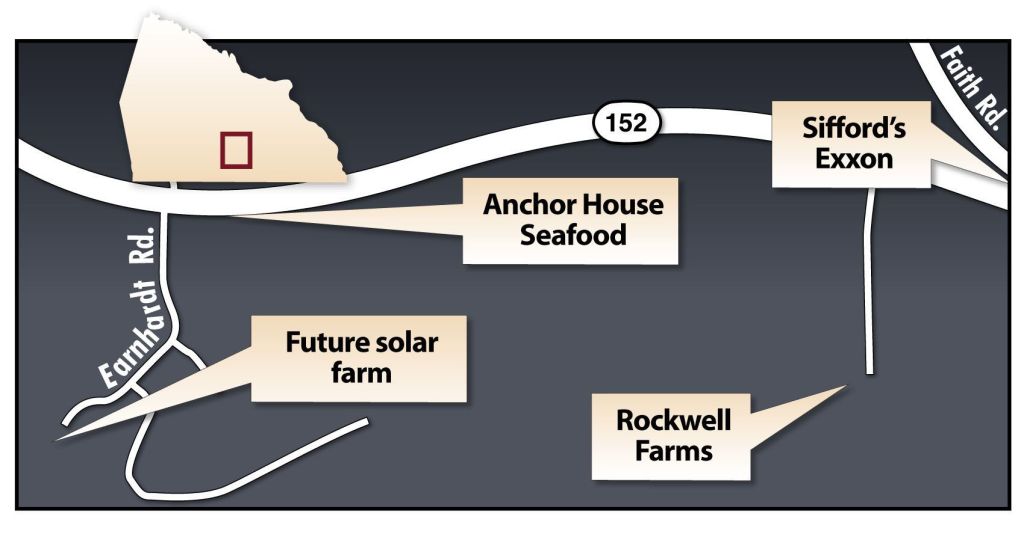 ROCKWELL — The newest solar farm coming to Rowan County will have one woolly difference from the others.
About 150 sheep will provide lawn maintenance for O2 Energies’ $10 million, 4.25-megawatt DC solar farm between Rockwell and China Grove.
Incorporating the livestock from T&D Farms in China Grove, about 6 miles from the solar farm planned for the end of Earnhardt Road, is just one example of O2 Energies’ hyper-local focus. President Joel Olsen on Wednesday told a roomful of Rowan County business and education leaders that his company will hire local labor, rent local equipment and obtain financing through a local bank to build the power plant near Rockwell Farms and Carolina Quarries.
Todd Mauldin, the China Grove farmer, said O2 Energies probably will save between $20,000 and $30,000 a year on lawn maintenance by allowing him to graze sheep on the grass that will grow under and around the solar panels. O2 Energies has partnered with Sun Raised Farms to pioneer the use of sheep and other sustainable agricultural methods to maintain all of the company’s solar farms.
Mauldin said the grass-raised sheep will bring a premium price and end up for sale at Whole Foods grocery stores in North Carolina.
“There’s nothing else like this around here,” he said.
O2 Energies has seven solar farms in operation and three under construction. Rockwell will be the 11th. Others range in size from a 1-megawatt plant in Newland to a 20-megawatt facility planned for Montgomery County that will generate enough electricity to power the equivalent of 3,500 homes a year.
“It’s not a question of how many we can do but what level of quality and what level of community involvement can we have,” said Olsen, who grew up in Charlotte and graduated from the University of North Carolina at Chapel Hill.
Olsen’s company has been working for two years on the project, which will stand on land owned Gary and Linda Weant and Gary Weant’s mother, Margaret Weant, all originally of Rowan County. The family wanted to do something more sustainable with the acreage than just harvest lumber, Olsen said.
All permitting, zoning and rights of way have been obtained, Olsen said. Wednesday’s event was intended to announce the project to the public and forge new partnerships with local businesses, he said.
The solar farm will add $2 million to the local tax base but use no services like schools, water or sewer, said Robert Van Geons, executive director for RowanWorks Economic Development Commission, which hosted the stakeholders meeting.
The project will generate about 50 jobs during construction and offer another opportunity for workers to gain experience. Once a worker has participated in two solar farm construction projects, he or she can take a course at a local college and earn a solar installer license and then work on any project in the country, Olsen said.
Located next to two large power consumers — Rockwell Farms and the quarry — the solar farm will offset the amount of electricity that needs to be sent to the area by coal, nuclear and gas power plants, Olsen said. Because the electricity will be consumed close to where it is generated, no power will be lost in transmission, he said.
O2 Energies partners with local schools and has developed a six-week science course that culminates with a field trip to one of the company’s solar farms, Olsen said.
“We think the value of these assets to the community are tremendous,” he said.
A solar farm also can help lure jobs by attracting companies that want to locate near clean energy generation, Olsen said.
The new solar farm will generate no pollution, smell or sound. Other than “baa.”