Charlotte jumps up to sixth in the East after OT win 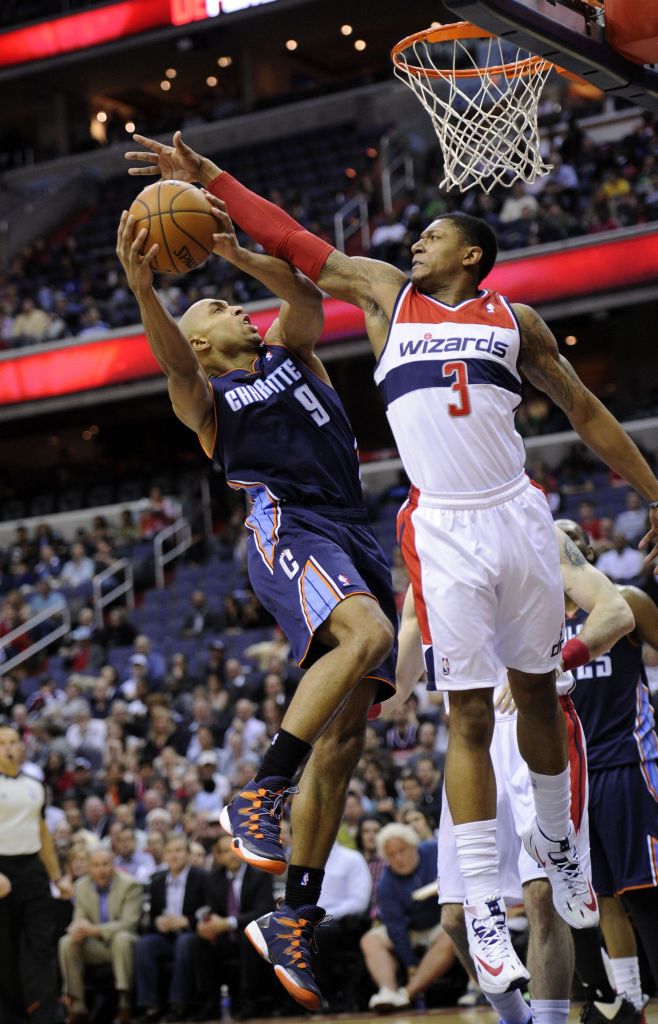 WASHINGTON — The Charlotte Bobcats have leapfrogged another team, increasing the odds that their return to the playoffs won’t be a token appearance.
The Washington Wizards have dropped a spot and are having issues. Or, as center Marcin Gortat put it: “The way we play right now, we ain’t going to beat anybody, including Milwaukee.”
The Bobcats blew a 20-point, first-half lead to the Wizards on Wednesday night before winning 94-88 in overtime, moving Charlotte into position for the No. 6 seed in the Eastern Conference.
“To go from basically the worst team going to the six seed, I mean, it shows a lot,” said guard Kemba Walker, who scored the only field goal in overtime for either team.
The win left both teams at 40-38 with four games remaining, but Charlotte won the season series 3-1 and therefore holds the tiebreaker. Both teams want to stay out of seventh or eighth to avoid a first-round series against the two conference powerhouses, the Miami Heat and Indiana Pacers.
The Bobcats have been in the playoffs only once before, when they were swept in the first round in 2010.
“We getting better as a team, we two games above .500,” said Al Jefferson, who had 20 points and 18 rebounds. “But does it really matter where we’re at for seeding-wise? No, we just happy to be in the mix.”
Walker made a 3-pointer and a pair of free throws in the extra session, and Jefferson added two free throws to account for all of the Bobcats’ scoring. Charlotte went 1 for 7 from the field in overtime, while Washington was 0 for 8 and got its only point from a free throw by John Wall with 34 seconds remaining.
Walker finished with 17 points and 12 assists for the Bobcats, who have their longest winning streak since March 2010.
“He’s got courage,” Charlotte coach Steve Clifford said. “He wants the ball late and he’s not afraid to take the big shot.”
Wall had a candidate for most underwhelming triple-double of the season — 14 points, 12 rebounds and 11 assists — and Gortat finished with 27 points and 14 rebounds for the Wizards, who were nearly run out of their own building in the first half for the second straight game and are limping toward the finish line of their first playoff season since 2008.
Among Washington coach Randy Wittman’s reviews: “To have no more energy or drive or enthusiasm than we showed in that first half, it’s disappointing. … I was just not expecting to come out and go through the motions. … When you don’t put effort in, you’re not going to have (a) good showing.”
Added veteran Gortat: “I guess we’re immature and just not experienced enough and I guess everything starts in the practice. The first few minutes we’re walking and just fooling around and this is how you start a game.”
Such comments put the focus on young All-Star Wall, who went 6 for 18 from the field and committed five turnovers. Wall disagreed with his coach’s “go through the motions” assessment.
“I don’t feel that way,” Wall said. “I feel like we competed. … The last couple of games we haven’t been able to knock down shots.”
Wall had called this game the most important of the year, but he also made a whirlwind overnight trip to Texas on Monday to watch Kentucky lose the NCAA championship game. He said that had “nothing to do” with his performance.
“I practiced yesterday and had a good day,” Wall said. “Came here and had a game today. It’s not like I went the night before.”
Trevor Ariza, who has been battling the flu, went 0 for 6 from the field for the Wizards. Washington was 1 for 15 from 3-point range.
The Wizards again made defense optional in the early going, echoing their beatdown by the Chicago Bulls on Saturday.
But Washington hit its stride in the third quarter and took its first lead of the game on Bradley Beal’s 15-foot jumper with 5:28 to play.
Jefferson forced overtime with a layup that tied the game with 3.2 seconds remaining. Wall didn’t get a shot off as time expired in regulation.
Notes: Wizards F Nene, back after missing six-plus weeks with a sprained left knee, was understandably rusty. He missed all four of his free throws and finished with 10 points in 17 minutes. … It was Wall’s third career triple-double and second this season. … Bobcats F Josh McRoberts returned after missing three games with a sprained left ankle.

Prep baseball: Defending champs in CCC too tough for…