Words to the wise 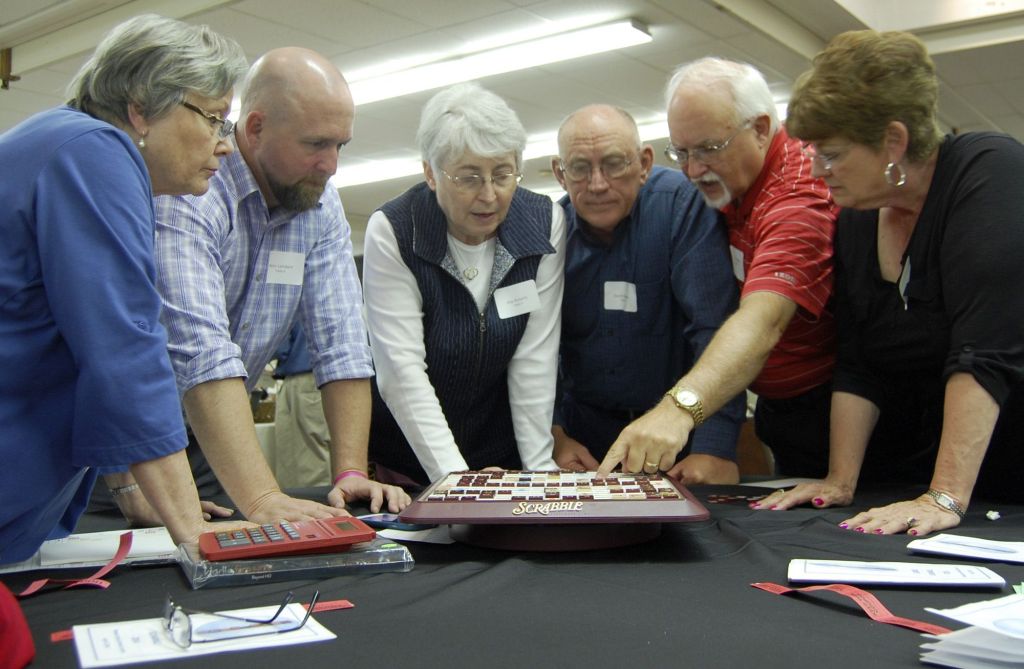 SALISBURY — In battles of wits and words, it pays to be prepared.
Gathered around tables in the fellowship hall of St. John’s Lutheran Church on Tuesday, five teams pitted their best of both against their rivals in the Rowan Literacy Council’s 11th annual Scrabble Scramble.
As the third and final round of the night got underway, moderator David Whisenant of WBTV called out the final starting word: “mischievous.”
The bell sounded, and teams started clicking their letters into place … looking over the game board, counting up points and counting out the remaining tiles.
Each team raced the clock to fit as many connected words onto the layout as possible.
At the South Rowan Y Service Club table, Alan Lambert looked at the spaces remaining. “Are we out?” he asked.
“No, we’re not out,” Terry Bradley replied, “look at all this.” He pointed to the remaining tiles.
There followed a frenzy of discussion about how they needed more vowels to form the words that they hoped would put them in the lead over the defending champion team from the Trinity Oaks retirement community.
The competition fundraiser uses Scrabble boards and tiles, but with a twist.
All teams start each round with the same word in the center of the board, and then build their own words onto it to form the crossword with the highest possible score.
Teams play their words from memory, though they can buy a peek at a dictionary to look up a word.
And extra tiles are available, at $1 per point of value.
Literacy Council President Phyllis Martin said the Scrabble Scramble is the non-profit’s main source of funds, alongside United Way and private donations.
At the judges’ tables, where each team’s entries are checked against official dictionaries, Helen Peacock said she gets to see both sides of this event.
As a volunteer for the past eight years, she gets to see the competition unfold, while as a teacher with the Literacy Council, Peacock said she gets to see the impact those funds have.
“I have two students,” Peacock said.
Literacy Council volunteers assist with basic reading and literacy skills, as well as English-language instructor for non-native speakers.
The proceeds go to purchase educational materials for services. Martin said the agency’s educators are all volunteers, and the only paid position is an administrative assistant.
“That way, it doesn’t cost our students anything to get the materials,” Peacock said. “It makes a big difference in their lives.”
After 11 years, Martin said, most of the teams and players know one another well, and they enjoy the chance to socialize.
They spend the dinner hour before the competition catching up, “and planning their attack,” Martin said.
Over at the table of team “Perfekt Spelers,” Shelley Palmer said she loves coming “just for fun.”
Palmer, an English instructor at Catawba College, joined a group of teammates that included Mayor Pro Tem Maggie Blackwell.
It’s the seventh year this team has competed, Palmer said, and it’s a tradition.
It’s not about the glory of winning, Palmer said — they came in fifth.
Win or lose, “we would come anyway,” Blackwell said. “We get to play with words and have great camaraderie.”
As teams stretched to fit words like “psychoanalyzing” and “demythologizing” and “oxyphenbutazone” onto the grid, Whisenant kept track of time as it wound down.
As moderator, Whisenant was the one who announced the secret starting words around which the teams must arrange their own.
This year’s starters included “anticipations” and “quadraphonics,” a word Whisenant called “a blast from the past.”
At the South Rowan Y Service Club’s table, Barbara Collins said, “We have a good time and it’s helping the community.”
“We spent over $800 on extra tiles,” her teammate, Bruce Miller, said. They’d gone to get more tiles to make use of their extras, and fill in the rest of the board.
But sadly, it wasn’t enough. A last-minute burst of spelling left them with a gap between words that the team said cost them about 300 points.
That was enough to put the team from Trinity Oaks over the top — their second straight win, and their third in the last four years.
Dave Foreman, team captain for Trinity Oaks, said their strategy was “same as last year, teamwork, practice and planning.”
And, he said, a core group of committed donors. Trinity Oaks donated some $1,600 to the event, all of it donations from residents.
“I tell you, the support we get is just wonderful,” Peacock said.
Contact Hugh Fisher via the editor’s desk at 704-797-4244.