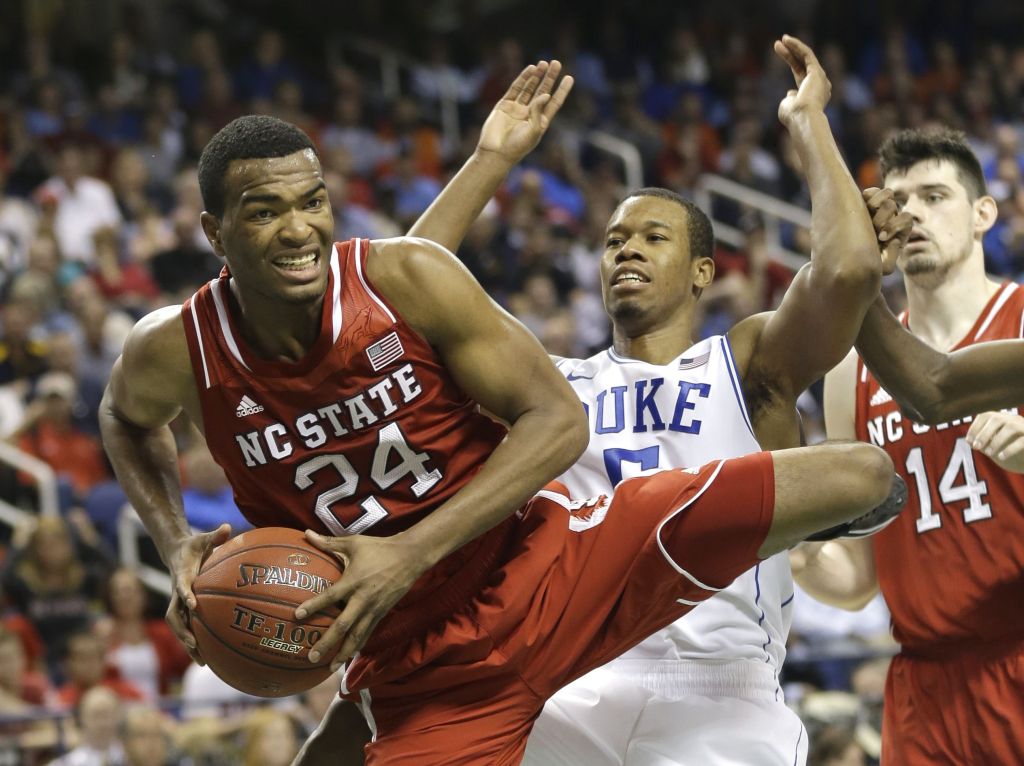 RALEIGH (AP) — North Carolina State sophomore T.J. Warren is taking his high-scoring game to the NBA.
In a statement released by the school Tuesday, the Atlantic Coast Conference’s player of the year said he had “a fun ride” but was ready to enter the NBA draft.
“Playing in the NBA has been a lifelong dream of mine, and playing at N.C. State has prepared me well to achieve my dream,” Warren said.
Behind Warren, the Wolfpack went from being picked to finish 10th in the ACC to reaching the NCAA tournament for the third straight year and beating Xavier in the First Four.
The 6-foot-8 forward led the league at 24.9 points per game — good for third nationally — while shooting a league-best 52.5 percent. He also led the team in rebounding at 7.1 per game.
Warren closed the regular season with 41 points at Pittsburgh and a career-high 42 points against Boston College, making him the first ACC player to go for 40 in consecutive games since December 1990 and only the seventh overall. He was the first N.C. State player to do it since program great David Thompson in December 1974 and the first ACC player to do it in consecutive league games since 1957.
Warren set school single-season records with 871 points and 31 20-point games.
“I truly believe he was the best offensive player in the nation this year, and although he is a great scorer, his rebounding and defensive improvement are often underappreciated,” Wolfpack coach Mark Gottfried said in a statement. “I am excited for T.J. and want the very best for him. I believe in him and will miss having him in our program.”
A year earlier, Warren averaged about 12 points and shot an ACC-best 62 percent in a supporting role behind C.J. Leslie, Lorenzo Brown, Richard Howell and Scott Wood. He mulled an NBA jump last season but returned to a leading role after the departures of those upperclassmen as well as the transfer of freshman Rodney Purvis to Connecticut.
Warren dropped about 20 pounds to around 215 this year to better handle the load for an inexperienced team.
“I told him last year … work on your game, get your mind right and come on back and show what you can do,” his father Tony Warren said last week. “And he did that.”
The elder Warren, a former Wolfpack player, had said he wanted his son to take his time and “be 100 percent sure” on his decision even as he expected him to be a top-20 pick.
N.C. State will also lose fifth-year senior Jordan Vandenberg and sophomore point guard Tyler Lewis, who said last week he would transfer to Butler. But N.C. State (22-14) returns second-leading scorer Ralston Turner (10.5 points) and adds a top-20 recruiting class featuring power forward Abdul-Malik Abu, and twin wings Caleb and Cody Martin.