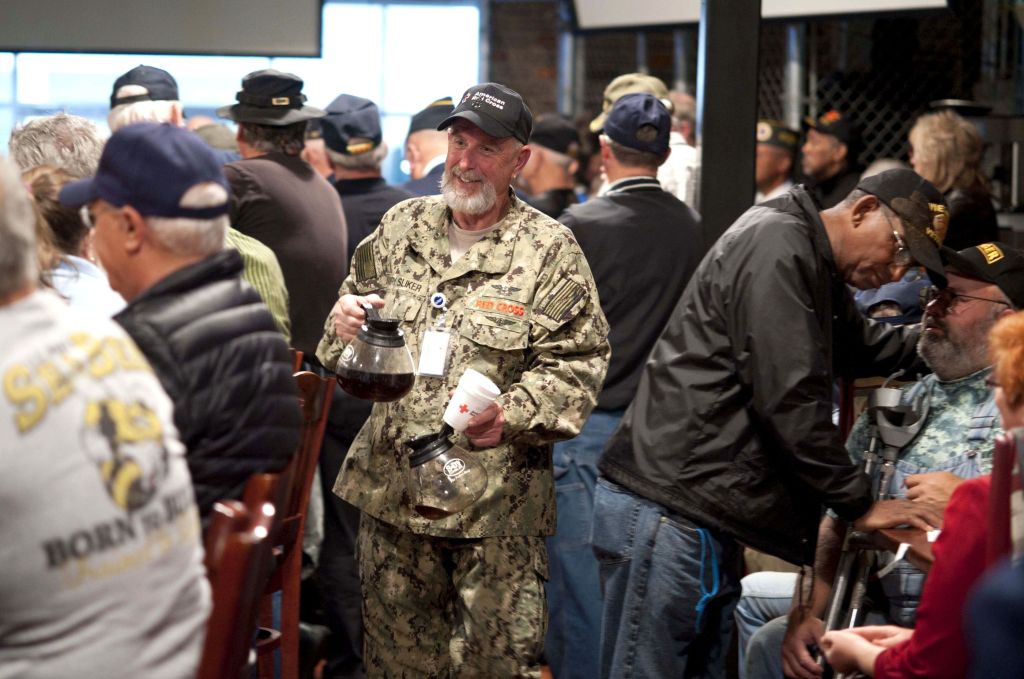 SALISBURY — The word you kept hearing Tuesday morning at the official debut of the Frontier Coffee Shoppe was “therapy.”

When veterans come to a place where they can grab a free cup of coffee, sit down and talk with other veterans, there’s something therapeutic just in the conversation that happens, and keeps happening week after week.

“We can help a lot of veterans — and that’s what it’s all about, said Mike Hibler, veterans service officer at the Hefner VA Medical Center. “Veterans open up to each other.”

The Frontier Coffee Shoppe, located in the former sports bar section of Thelma’s Down Home Cooking (at the West End Plaza), is modeled after Richard’s Coffee Shop in Mooresville.

Veterans travel from all parts of the region to have a free cup of coffee at Richard’s every Thursday morning.

Leo Fahey, chaplain for Richard’s, said he has seen veterans change, relax and let go of the wounds of war by just coming to the coffee house weekly.

“The whole blessed thing just seemed to happen by itself,” Fahey said. “It’s a wonderful place, a beautiful place, and I think it’s a sacred place.”

The veterans behind the creation of the Frontier Coffee Shop hope to provide the same kind of casual therapy for veterans from 9-11 a.m. Tuesdays in Salisbury.

But don’t expect any jealousy or competition between the coffee shops.

In fact, the room Tuesday was full of veterans who regularly have Thursday coffee at Richard’s. One of those men, Tom Harrell of Salisbury, was the chief organizer behind the Tuesday morning-only Frontier Coffee Shoppe.

“What I hope to do is replicate, not duplicate,” Harrell said. “The whole thing is I hope we find the same kind of chemistry, therapy, whatever, that we found over there.”

Since its establishment in 1995 by the late Richard Warren, Richard’s Coffee Shop has had close to 10,000 veterans sign its “Book of Honor.”

The Frontier Coffee Shop began its own Book of Honor Tuesday and by the end of the morning had close to 150 veterans sign in, with their dates of service included.

The first person to sign the Book of Honor was Thelma Luckey, owner of the restaurant and a veteran of the U.S. Army Reserve, 846th Transportation Co., in which she served from 1973-1994.

Harrell said he and Luckey made for an unlikely pair in establishing the coffee house, but they shared the same vision, as expressed in the Bible, that for those who love God, all things are possible.

“It was meant to be,” said Luckey, a retired staff sergeant who served in Desert Storm and Desert Shield in 1990-91.

Talk to veterans who have their free coffee in Mooresville or, now, Salisbury, and they’ll tell you the coffee shop models are good therapy because the government has no involvement in it.

Richard Seibert of Kannapolis said politics and religion are two things you don’t talk about at the various tables.

Regulars from Richard’s said the Salisbury coffee shop is a natural fit, especially with so many veterans coming to the Hefner VA Medical Center for appointments and treatment.

But a challenging problem for any veteran, they noted, would be aligning their VA visit so they could still visit the Frontier Coffee Shop during the two-hour window on Tuesdays.

Hibler accompanied a half dozen veterans in wheelchairs from the VA Medical Center to the coffee shop Tuesday.

“It gets them out of their little world, and they’re not fighting battles by themselves,” Hibler said.

Carol Greene, who is with the National Alliance on Mental Illness Rowan, said it’s important for veterans to talk with other veterans.

Outside of places such as the coffee shop, male veterans often don’t share their feelings and thoughts about their war experiences, Greene said. They think they have to be real men and not talk about things such as post traumatic stress disorder.

“Here, they’re not frightened to talk about PTSD,” Greene said.

Pamela Scheffer-Bossardet, veterans service officer for the Crosspointe Arms Veterans Ministry, said the coffee shops are important in giving veterans a kind of camaraderie and therapy they can’t find elsewhere.

“I absolutely love it,” she said.

Fahey, the chaplain at Richard’s Coffee Shop, said over the years various groups of men sit together, and they have given names to their tables.

But without any real blueprint or fancy analysis, Fahey said, Richard’s became therapy for the veterans and a place for brotherhood and sisterhood.

Ralph Dagenhart, past chairman of the nonprofit board that oversees Richard’s Coffee Shop, said Warren began his vision by one day saying thank you and welcoming home a veteran in his wheelchair and the man pushing him.

He invited the men back and told them to bring others for free coffee. It grew exponentially from there.

By 2008, the year Warren died, a nonprofit organization was set up. It has a seven-member board today. On Thursdays the group depends on eight volunteers behind the counter and 15 to 20 non-veterans overall.

Richard’s Coffee Shop includes a “Living Military Museum,” too. Harrell said the Frontier Coffee Shoppe will not be a military museum, and he praised Bobby Mault’s Price of Freedom Museum in China Grove for filling that bill.

The Frontier Coffee Shoppe is part of the West End Plaza, now owned by Rowan County.

Jim Sides, chairman of the Rowan County Board of Commissioners, received the biggest ovation of the morning when he gave a personal tribute to veterans and their sacrifice for the country.

When he thinks of veterans, Sides said, he remembers his father, who served in Germany during World War II before he was born.

He thinks of his father-in-law who was among the men who landed on the beaches at Normandy. Sides also had a brother and uncle who were servicemen.

Among veterans, who are heroes in his eyes, Sides said he often feels out of place.

“I’m honored to be in your presence,” he said.

Sides also informed the coffee shop veterans that the county’s Veterans Service Office would soon be located in the mall across from Thelma’s at the former Kay Jewelers spot.

Harrell said similar coffee shops for veterans are being planned for Concord and Kinston.

As with Richard’s Coffee Shop, the Frontier Coffee Shoppe sold 50-50 tickets as a way of reimbursing Luckey for some of her costs.

Learn about state, Salisbury connections to War of 1812…