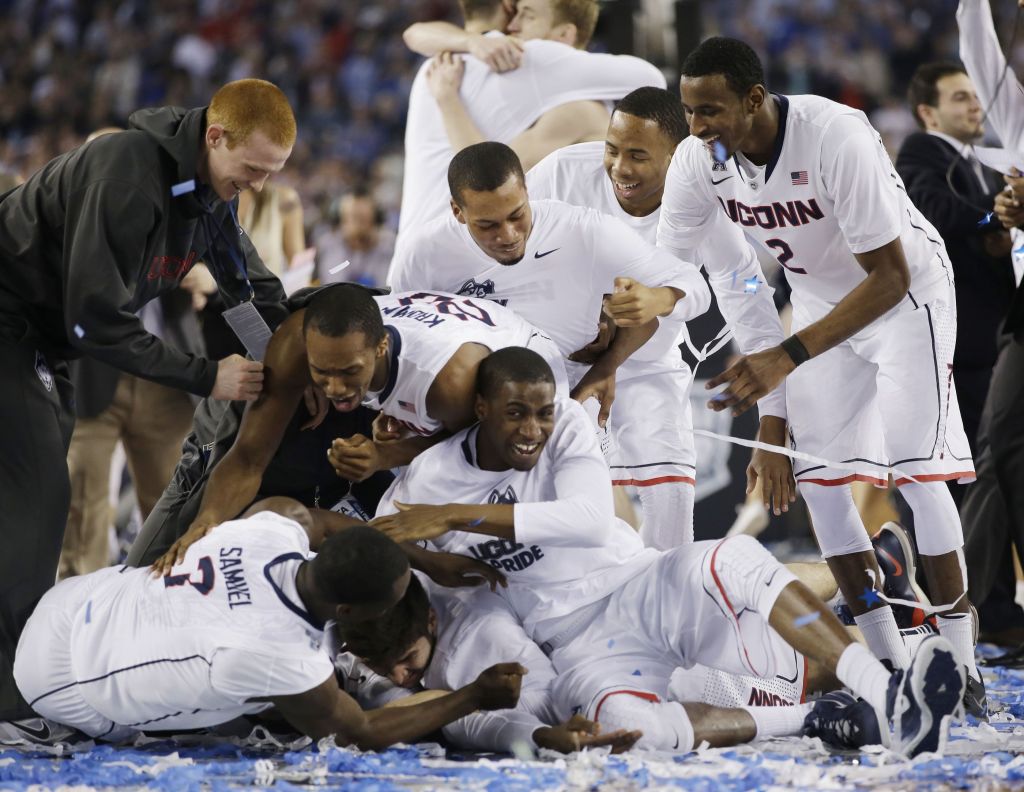 ARLINGTON, Texas — No conference wanted them. Several teammates and their coach left them. The NCAA kept them out for a year.

UConn won it all anyway.

Shabazz Napier turned in another all-court masterpiece Monday night to lift the Huskies to a 60-54 win over Kentucky’s freshmen and a national title hardly anyone saw coming.

Napier had 22 points, six rebounds and three assists, and his partner in defensive lock-down, Ryan Boatright, finished with 14 points.

Napier kneeled down and put his forehead to the court for a long while after the buzzer sounded. The senior guard was wiping back tears when he cut down the net.

“You’re looking at the hungry Huskies,” Napier told the crowd and TV audience. “Ladies and gentlemen, this is what happens when you banned us.”

Yes, it is only a short year since the Huskies were barred from March Madness because of grade problems. That stoked a fire no one could put out in 2014.

UConn (32-8) never trailed. The Huskies led by as many as 15 in the first half and watched the Wildcats (29-11) trim the deficit to one with 8:13 left. But Aaron Harrison, Kentucky’s big-moment shooter in the last three games, missed a 3-pointer from the left corner that would’ve given the ‘Cats the lead. Kentucky never got closer.

One key difference in a six-point loss: Kentucky’s 11 missed free throws — a flashback of sorts for coach John Calipari, whose Memphis team blew a late lead against Kansas after missing multiple free throws in the 2008 final.

“We had our chances to win,” Calipari said. “We’re missing shots, we’re missing free throws. We just didn’t have enough.”

In all, Calipari’s One and Doners got outdone by a more fundamentally sound, more-seasoned group that came into this tournament a seventh-seeded afterthought but walked away with the program’s fourth national title since 1999. They were the highest seed to win it all since Rollie Massimino’s eighth-seeded Villanova squad in 1985.

Napier and Boatright now go down with Kemba Walker, Emeka Okafor, Richard Hamilton and all those other UConn champs. This adds to the school’s titles in 1999, 2004 and 2011.

This one was, by far, the most unexpected.

A short year ago, UConn was preparing for its first season in the new American Athletic Conference after being booted from the Big East and not welcomed by any of the so-called power conferences. Longtime coach Jim Calhoun left because of health problems. And most damaging — the NCAA ban triggered an exodus of five key players to the NBA or other schools.

Napier stuck around. So did Boatright. And Calhoun’s replacement, Kevin Ollie, figured out how to make their grit, court sense and loyalty, pay off.