Family, friends gather to celebrate the life of Mark-Ethan Stewart 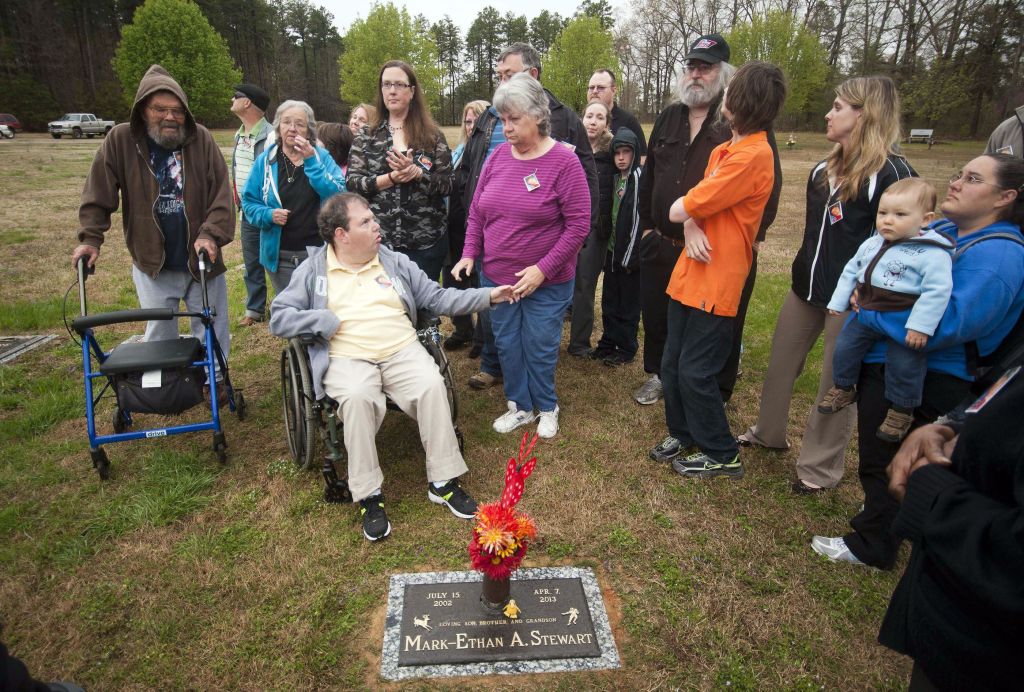 Monday marked one year since Christi Stewart’s youngest son, Mark-Ethan, died at the hands of her boyfriend in a vicious attack that left her with near-fatal injuries.

Stewart spent nine days in the hospital and wasn’t even able to attend her 10-year-old son’s funeral.

On Monday, she got a chance to say goodbye. More than a dozen people including family, friends and teachers gathered with Stewart at Rowan Memorial Park, where Mark-Ethan is buried.

They released balloons in his memory.

“I believe he’s in heaven, and it’s kind of our way of sending love to heaven,” Stewart said.

She said it was the least she could do for her son.

Stewart’s boyfriend of six months, Eugene William Mays, was arrested the day after the attack and charged with her son’s murder and with seriously wounding Stewart.

Mays, 40, admitted to the crime and asked to be sentenced at his first appearance in a Cabarrus County courtroom. He pleaded guilty in November to first-degree murder and was sentenced to life in prison.

Stewart said investigators believe Mark-Ethan was killed trying to come to her rescue. Stewart doesn’t remember much about that day but believes she and Mays argued before he attacked her. He slashed her throat, cutting from behind her ear, across her neck and under her chin. He also cut off part of her ear. Mays also severely beat Stewart, she says, knocking out a tooth. She believes Mays was high the night before he attacked her.

Stewart said her son was always a “mama’s boy,” and she feels guilty because she wasn’t able to save him.

Stewart’s mother, Brenda Reist, asked law enforcement to check on her daughter that night when she couldn’t get anyone to come to the door. Reist became alarmed when Stewart’s oldest son, C.J. looked through the window and saw the house in disarray.

While hospitalized, Stewart had several mini strokes that robbed her of the memory of the events leading up to that day. Stewart remembers very little of her time at the hospital. She underwent surgery, but doesn’t recall much else.

Stewart said some of the balloons released Monday were camouflage because her son liked to hunt and some were pink because he just liked the color. At the end of the balloons were tags that asked the finder to contact the family or visit their memorial Facebook page titled, “In Memory of Mark-Ethan.”

The Royal Oaks Elementary School fifth grader was a member of the Tall Tines Hunt Club in Anson County, where he often followed Bryan Owens around.

Owens said Mark-Ethan would bring his BB gun and the two would shoot soda cans.

He was heartbroken when he heard of Mark-Ethan’s death.

Reist said what he’ll miss most is watching the 10-year-old in his backyard shop. Reist had begun to teach his grandson how to use power tools.

“He was always such a joy to have in class. He always came in and lit up the room,” she said.

The school created the Mark-Ethan Stewart Kindness and Compassion Award that is given to a student who exhibits similar traits as Mark-Ethan. His best friend, Spencer Bare, received the award the first year it was given. Bare and his mother, Tammy, also attended the service.

The two had been friends for two years. They both liked sports — Mark-Ethan liked football and Spencer, baseball.

Spencer said what he’ll miss most about his friend is “his laugh, his smile — everything.”

Tammy Bare said she remembers not long after learning of Mark-Ethan’s death her son wished and prayed that he could talk to his friend once more.

He had a dream, she said, that he and Mark-Ethan were at the playground together and Spencer was able to talk to him.

“It’s difficult. He misses him. He will always be his best friend,” Tammy said.

Christi gave Spencer a T-shirt that was one of her son’s favorites.

“He touched everybody’s heart. He always had a smile on his face,” she said.

C.J., 13, said he thinks it’s great that everyone was there to support the family and show how much they loved his brother. The two were close and spent time mostly playing outdoors, hunting and fishing.

Members of the Mothers of Murdered Offspring’s Cabarrus chapter were also on hand to “celebrate the life of Mark-Ethan,” said Sally Coleman.

One by one, balloons were released as those gathered formed a semi-circle around the family.

Before the final balloon ascended into the misty rain, Christi Stewart gave it a light kiss and sent floating overhead.