Strait wins entertainer of the year at ACM Awards 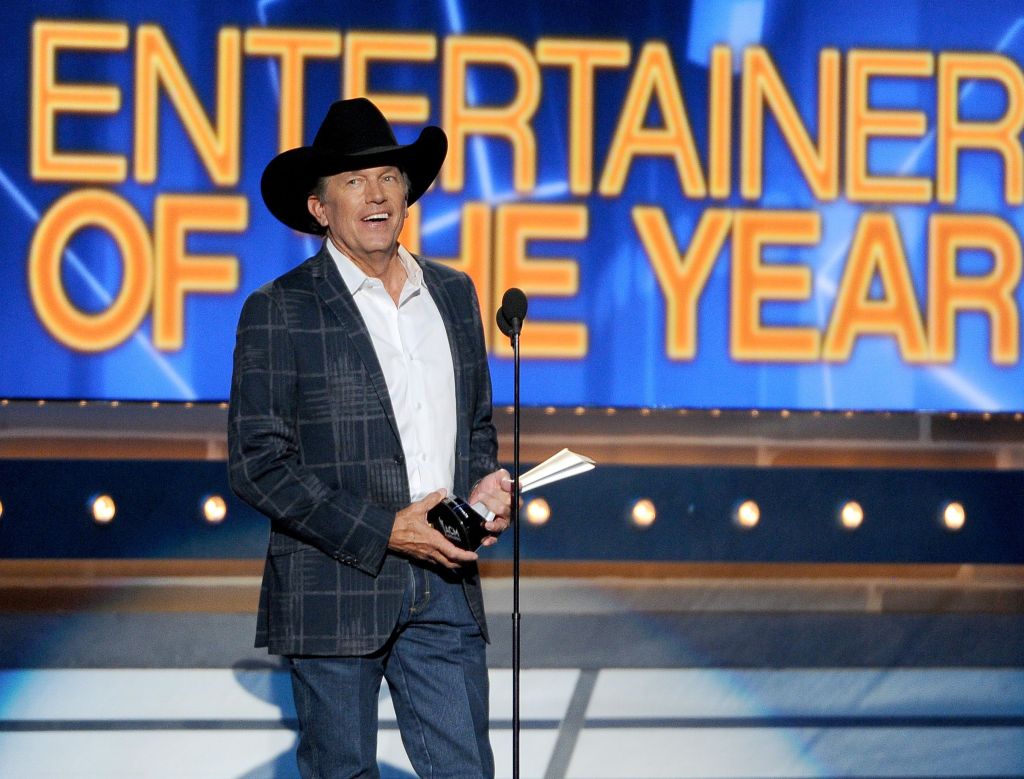 George Strait won his second entertainer of the year — 25 years after he won his first — and Miranda Lambert and Keith Urban teamed up to earn top honors Sunday night at a jam-packed Academy of Country Music Awards that had a little something for everyone.
Strait’s victory was not unexpected. The 61-year-old is a few months from retiring from the road and won the same trophy at the rival Country Music Association Awards five months ago. But the ACMs entertainer award is fan-voted and some wondered if Strait’s older fan base might vote.
“I’ve always said I have the best fans in the world,” Strait told the crowd. “I heard this was a fan-voted thing, so I rest my case.”
No one will begrudge Strait the win, including co-hosts Blake Shelton and Luke Bryan, who were also nominated in the category with Lambert and Taylor Swift.
“Our hero,” Shelton said in a genuine moment. “Our hero won tonight!”
Until that point Bryan and Shelton had overshadowed much of the ceremony, held in Las Vegas. Urban and Lambert tied for the most trophies but it was Lambert’s husband, Shelton, and Bryan who were on a winning streak.
They deftly stole the show with a mix of self-deprecating, celebrity-skewering jokes and two performances apiece. And as Shelton noted, he also gets to share Lambert’s bed.
“Honestly, I think we’re the biggest celebrities in the room,” Shelton said during the show’s funniest moment — a recreation of Ellen DeGeneres’ selfie moment at the Oscars — and it may just be true.
Shelton is the star of “The Voice” and a platinum-selling hitmaker with 11 straight No. 1s. Bryan was the reigning entertainer of the year, and both were up for that award again this year with Lambert, Taylor Swift and George Strait, the genre’s top stars.
They zinged Eric Church over the likelihood of finding marijuana in his dressing room, poked fun at Britney Spears (who performs on the Las Vegas strip) and ribbed Dallas Cowboys owner Jerry Jones, in the audience, about his team’s disappointing playoff record (Shelton and Bryan announced the 50th edition of the ACM Awards will be held at the Dallas Cowboys’ AT&T Stadium next year).
Each performed twice with Shelton offering a subdued but powerful version of his song “My Eyes,” playing an acoustic guitar while seated with Gwen Sebastian at his side, before returning flanked by Shakira on their duet “Medicine.” Bryan performed “Play It Again” while standing on a revolving replica of a vinyl album, then teamed with vocal duo of the year winner Florida Georgia Line on “This is How We Roll.”
Lambert did her best to upstage her husband, who gave her a peck on the forehead after she won single record of the year for “Mama’s Broken Heart,” co-written by Kacey Musgraves. Lambert also won her fifth straight female vocalist of the year award.
“I was just hanging out with (presenter) Trisha Yearwood back there, holy crap, and I was standing next to Sheryl Crow, a complete and utter rock star,” Lambert said of Crow, a fellow nominee. She also spoke about others in the category: “Kacey Musgraves, I grew up with her. She wrote the single of the year this year. And Carrie Underwood’s my buddy, y’all, and she’s a phenomenon. I can’t believe it, I’m so grateful and humbled. I love my job.”
Lambert teamed with Urban to win vocal event of the year for their “We Were Us” collaboration, for which Urban won trophies as producer and performer. Urban won video of the year with Tim McGraw and Taylor Swift for “Highway Don’t Care.” The three wins Sunday night gave Lambert 18 trophies at the ACM Awards since she first won best new female artist in 2006.
She followed up her single record of the year win with a performance of her song “Automatic,” one of several powerful moments on the night. Lady Antebellum and Fleetwood Mac’s Stevie Nicks teamed up on “Golden” and “Rhiannon,” a graceful Faith Hill helped out husband Tim McGraw on “Meanwhile Back at Mama’s,” vocal group of the year winner The Band Perry opened the night with a lot of energy and way too much confetti on “Chainsaw,” and Strait receiving a standing ovation for “I Got a Car.”
Lambert also participated in a tribute to Merle Haggard. But perhaps the most moving performance was by the audience at the MGM Grand, which broke into “Happy Birthday” as Haggard walked to the stage on his 77th birthday to receive the academy’s Crystal Milestone Award.

“Country music has been great to me all my life and it’s great again tonight,” Haggard said.
Musgraves won album of the year for “Same Trailer Different Park” two months after taking the Grammy for country album of the year. Lee Brice’s “I Drive Your Truck” won song of the year and Justin Moore won new artist of the year. It’s one of two fan-voted awards along with top honor entertainer of the year.
Jason Aldean — a target of his good friend Bryan and Shelton — won his second straight male vocalist of the year award.
“This is really unexpected,” a black-hatted Aldean told the crowd. “It was a shock last year to win it and even a bigger shock this year, I think. … It’s been one hell of a ride, so I hope it doesn’t end any time soon.”