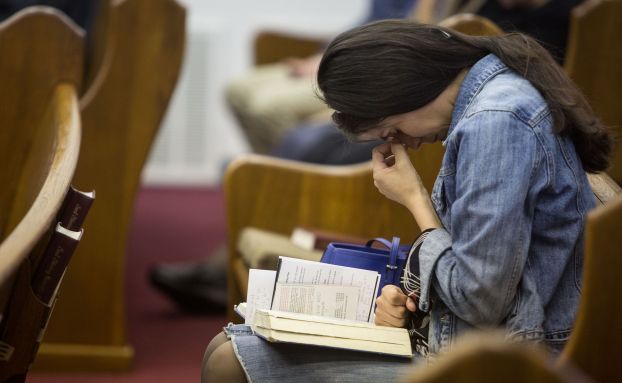 KILLEEN, Texas (AP) — The church program pictured an empty road being enveloped by the dark clouds of a sweeping thunderstorm, and the service’s lesson was from Isaiah 35:4, “Be strong, fear not.” The preacher implored those gathered Sunday that they would find hope in God, but also acknowledged the question on everyone’s mind: Why Fort Hood — again?
What would have been a routine Sunday service at Tabernacle Baptist Church just outside the sprawling Texas military base became a tribute to the soldiers killed four days earlier when a fellow service member opened fire. It also offered some catharsis for the community struggling to comprehend Fort Hood’s second fatal shooting rampage in less than five years.
Similar somber religious gatherings were held throughout the military town of Killeen, but there were more questions than answers.
“A lot of us, I think this morning, are asking the question, ‘Why? Why would this happen? Why Fort Hood again? Why are these types of things allowed to happen?”’ Pastor Robert Sperbeck told dozens gathered at Tabernacle, where 90 percent of the congregation is current or retired military personnel. “The devil is the author of what happened on Wednesday, but we do know the answer, we know there is hope.”
Investigators say Spc. Ivan Lopez, an Army truck driver from Puerto Rico, had argued with soldiers in his unit moments before killing three people and wounding 16 others and then fatally shooting himself. Base officials have said Lopez, who saw no combat during a deployment to Iraq, was being treated for depression and anxiety while being assessed for post-traumatic stress disorder.
The shooting immediately revived memories of the November 2009 attack by Nidal Hassan, an Army psychiatrist who killed 13 and wounded more than 30 people at the base.
The White House said Sunday that President Barack Obama planned to attend an official memorial service Wednesday at Fort Hood. But in the surrounding town, the grieving has already begun. Residents have also held a march and a vigil, while Killeen’s Central Christian Church erected a memorial with a trio of crosses honoring those killed and 16 flags for those wounded.
Sperbeck lead the singing of “Amazing Grace,” passed a collection plate for the shooting victims and read the names of the slain soldiers.
He said Sgt. Daniel Ferguson, a 39-year-old from Florida, “died a hero,” noting that he was killed while holding a door shut to keep the shooter from entering a room and targeting more potential victims.
The pastor said that 38-year-old Staff Sgt. Carlos Lazaney-Rodriguez from Aguadilla, Puerto Rico, was a 20-year army veteran who was just seven months from retirement. And Sgt. Timothy Owens, 37, from Effingham, Ill., “had planned to make a career serving in the military.”
“Lord we pray for the military, for our fort where there are many that are without hope, that are in the midst of depression,” Sperbeck said. “They need help and we’re here to help them.”
As she listened, tears streamed down the face of 31-year-old Kathy Abad, whose military police officer husband was at Fort Hood at the time of the shooting but didn’t witness the attack.
“My heart is shattered for all the families,” Abad said afterward. “It hits home, feeling the loss of wives and mothers and entire families. Wounds have been reopened.”
After the 2009 shooting, Fort Hood tightened security. Abad said that in the days since Lopez’s rampage, even more measures have been imposed. She said her husband reports that post officials have begun stopping nearly every car heading into the base to search for weapons, even though commanders insist that can’t continue forever for logistic reasons.
Fort Hood covers 340 square miles, with more than 40,000 soldiers living on post and 80,000-plus military and civilian employees and contractors coming to work there every day.
“We do expect security to be very high right now,” Abad said. “I think that’s important.”

The pool of Republican candidates battling for the three seats opening up on the Rowan County Board of Commissioners certainly... read more