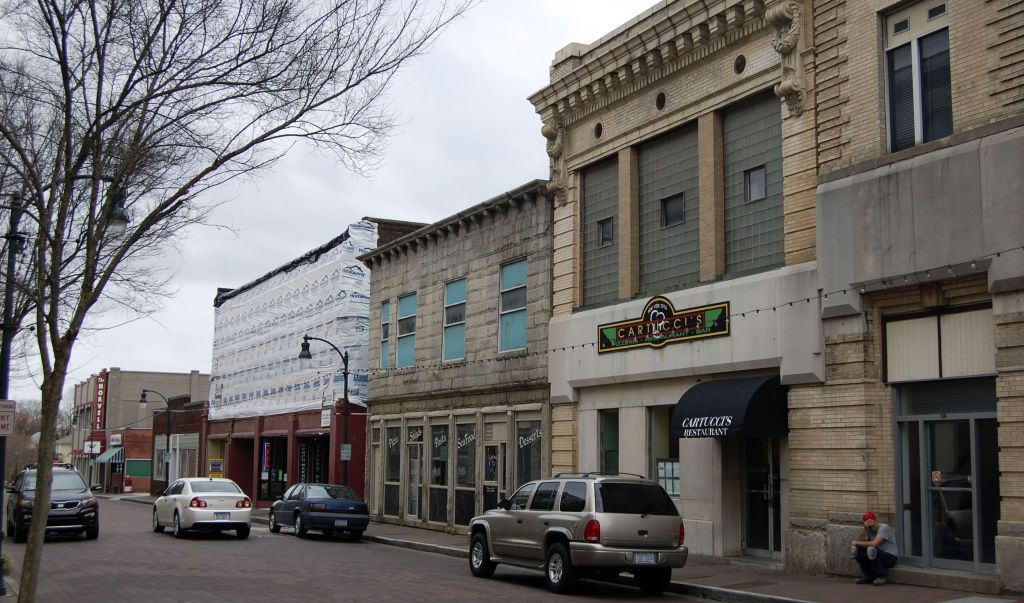 SALISBURY — The downtown entertainment district on East Fisher Street has been less entertaining lately, with Cooper’s closing, Cartucci’s still not open after a fire last year and Benchwarmers’ facade wrapped in plastic.
But business owners and downtown officials say that’s about to change.
Benchwarmers’ owner Todd Littleton, who said work will begin soon on a $500,000 makeover of his building’s exterior at 113 E. Fisher St., may open a small-batch brewery and taproom in the historic old firehouse around the corner at 113 S. Lee St.
Littleton has a contract on the property, which has been vacant for years and came back on the market last month. He plans to close the sale Tuesday.
Cartucci’s owner Ted Aurora said he is finally close to reopening his restaurant at 105 E. Fisher St. after months of delays. Once the Italian eatery is up and running again, Aurora said he will launch his new venture, the Grapevine, in the former Blue Vine location around the corner at 209 S. Main St. Cartucci’s will provide food for the Grapevine.
Gian Moscardini said he’s considering expanding his microbrewery, New Sarum, as well as the Salty Caper, both in the 100 block of South Lee Street next to the old firehouse.
Paula Bohland, interim executive director for Downtown Salisbury Inc., said several restaurant owners have shown interest in leasing the former Cooper’s location at 122 E. Fisher St.
Despite the closed-up appearance of East Fisher Street, where Chef Santos and Benchwarmers are the only places to buy a drink or order a meal, downtown advocates say the city’s entertainment district has grown and continues to draw people looking for fun, food and entertainment.
“The district itself is holding its own. The businesses that are there are bringing in quite a bit of traffic to that area, including Uncle Bucks and Go Burrito,” said Greg Rapp, a real estate agent who represents Littleton in the sale of the old firehouse.
People like Rapp and Mark Lewis, president of Downtown Salisbury, say the entertainment district expands beyond the bricks to include businesses on the periphery of East Fisher Street like Go Burrito on West Fisher and Emma’s and the Perfect Smoke on South Lee. Uncle Bucks also plugs into the scene from its new location, nearby at 127 S. Main St.
“There hasn’t been a longstanding restaurant in (Cooper’s) space since Las Palmas, and the entertainment district has continued to grow,” Bohland said. “There’s plenty that’s continued to flourish.”
Downtown has been waiting for more development, Rapp said. The planned expansions and redevelopments would have a positive impact on not only the entertainment district but the central business district as a whole, he said.
“Downtown is ready to bust open at the seams,” Rapp said. “It just takes people to take a chance.”
Littleton has scaled back his plans for the Benchwarmers building, with less elaborate interior renovations and no plans to open his own restaurant in the space formerly occupied by a beauty salon and barber shop. However, Littleton said he hopes to lease the location to another restaurant.
He still plans an extreme makeover of the front of the building, which has been wrapped in plastic since last summer when bricks started falling off the facade due to water and termite damage. Littleton said as soon as he finalizes funding for the project, construction will start.
Plans include a 70-foot balcony across the second story. Littleton said he will move the exterior wall on the second floor in by 12 feet, giving him about 1,000 square feet of balcony space accessed by a row of sliding glass doors.
Architect Jon Palmer’s design calls for moving two ground-level storefronts back from the street, creating an inset patio to offer additional outside dining, similar to Sidewalk Deli.
Because a facade renovation and microbrewery development aren’t enough to keep him busy, Littleton also has purchased a 10,000-square-foot former transmission shop at 215 E. Innes St. next to the old Foil Motor Building, which he plans to turn into a live music venue. That will take about five years, he said.
He praised plans by other downtown developers and business owners to expand or redevelop properties.
“It’s going to take all these components coming together for this to become a destination,” Littleton said. “If we had a few more things in addition to the (theaters), we could compete. We are almost there.”
Delayed by insurance issues and then bringing hoods and sprinklers up to code, Aurora said Cartucci’s only needs a few additional installations before he can reopen.
“I feel like I’ve been saying ‘two weeks’ for the last eight months,” he said.
Despite the closing of Cooper’s, Aurora said he has “great hopes” for East Fisher Street and believes people want more entertainment options in the downtown, which also lost Ethos this year.
Nationwide, 25 percent of restaurants fail in the first year and 60 percent in the first three years, Bohland said.
“What’s happening here is no different than anyplace else,” Lewis said.
The former Cooper’s space is ready to go, with hoods and a grease trap and a commercial kitchen already complete, he said. All a restaurant owner needs to do is strike a lease agreement and they’re set, Lewis said.
Victor Wallace, who owns the former Cooper’s location where Las Palmas reigned East Fisher Street for more than 20 years, said he’s had plenty of interest in the space.
“We have had several applicants, but none rising to the level that we’re looking for in terms of entertainment, food quality and service and execution,” Wallace said.
He said he expects “some good looks” from companies in the next 60 days.
Littleton said all forms of entertainment — nightlife, music, arts, theater, food — will work together to lure more people to the city’s core.
“I’m a firm believer that downtown is right on the edge of really exploding,” he said.
Contact reporter Emily Ford at 704-797-4264.