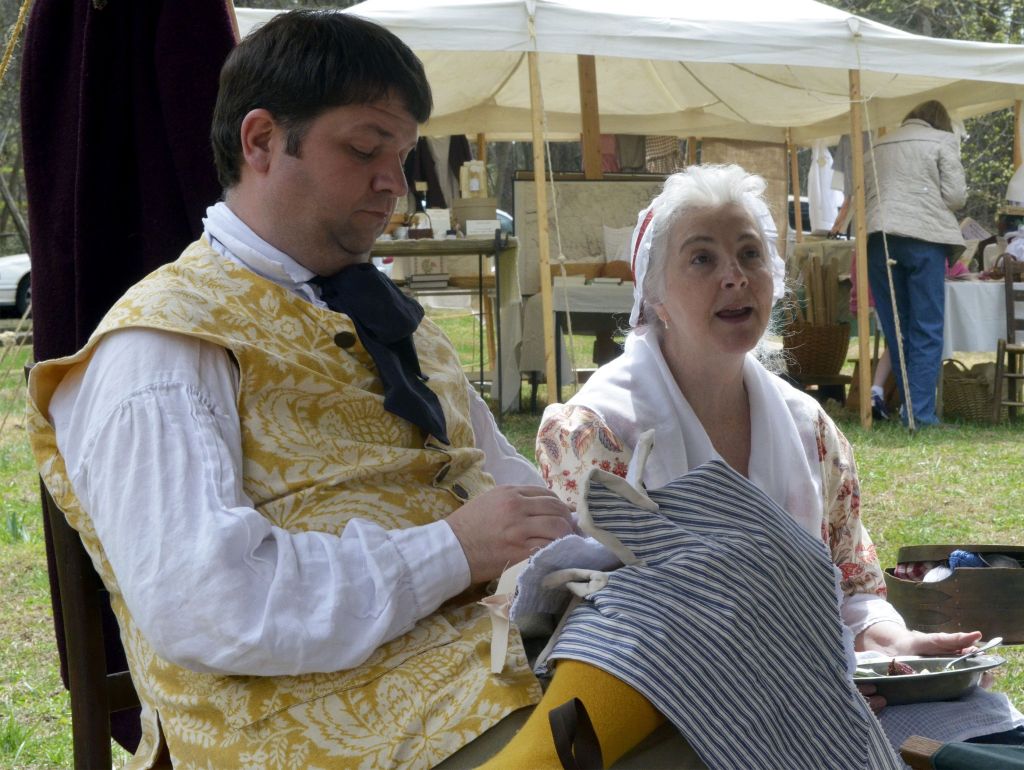 GRANITE QUARRY — When springtime came, the people of the late 1700s got to work, Nancy Stewart told her listeners Saturday at the Old Stone House.
At that time, in Colonial America, anyone who needed a barn raised would call on friends to help.
Also, she said, “you’d gather for court days, so there’d be business to be done, and you’d take the social things with you.”
And that meant good food and dancing, as well as work.
The Colonial Spring Frolic, Rowan Museum’s annual opening event at the Old Stone House, drew some 200 visitors on what volunteers called a “perfect day.”
There was fun out on the lawn, with Stewart and other members of Carolina Colonial Dancers performing English country dances on the lawn.
Lined up across from one another, partners performed steps and turns wearing clothing styles popular during the late 1700’s.
Over by the fire, in a tricornered hat, Luther Sowers said that people who lived in the countryside could dress fashionably.
“We always had the idea that the further out in the hinterlands you were, the slower the fashions changed,” Sowers said.
But the early residents of Rowan County were fashionable, as well as hard-working. Work and play happened alongside one another.
And so, as a recorder ensemble played in the front room of the Old Stone House, outside there was candle-dipping, basket-making and cooking over an open fire.
“If your neighbors come to help you do all those things, then at the end of the day there’s food and conversation and dancing,” Stewart said.
Nearby, in the tent where the dancers relaxed between performances, Todd Southard was sewing a stay — an undergarment worn by men and women during this time.
“And men were the basic stay-makers of the time,” Southard said.
Inside the house, in an upstairs room, Claire Allen sat at the weaving loom, doing a job girls of her age might have done in that time period.
Allen, 11, has been doing tours at the Old Stone House since last year. She said she started off going to Rowan Museum’s Summer History Camps.
“It’s actually really nice,” Allen said of her experience giving tours. “People seem really interested, there’s so much to learn about here, and even though I come every year I always learn something new.”
Outside on the lawn, Emily Walls, of Salisbury, sat with her spinning wheel, transforming fur from Angora rabbits into fine yarn.
She also cards and spins wool from her family’s goats.
A volunteer since last year, Walls talked about how her experience spinning yarn had helped her learn about the ways people in the 18th and 19th centuries made their own yarn and fabric.
Including, Walls said, the butternut tree dye used in Civil War gray uniforms.
There was another colorful time happening over by the fire, where ham-shank soup had been cooking in an iron pot.
Kids and grown-ups took turns coloring Easter eggs, using natural dyes from pokeberries, beets, violets and other ingredients.
It’s all very simple fun, Sowers said, but he hopes it makes an impression on young people that while life was very different, the people who lived in the late 1700s had good lives even without modern technology.
“My grandmother was born about eight years after Lee surrendered at Gettysburg,” said Sowers. “Technology, to her, was telegraphs and steam engines. She lived to see some of John Glenn’s suborbital flights.”
“You do not miss what you have not experienced,” Sowers said, and added that while he doesn’t think every person who came by will become a history buff, some will have an appreciation of history based on the fun they’ve had.
Kay Hirst, Rowan Museum’s executive director, agreed. She said the strong turnout was important, “so that people don’t forget their roots.”
And, Hirst said, people who are having fun are more likely to learn something.
“Whether they were born in Rowan County or not‚ “Everybody has ancestors from the 18th century,” Hirst said