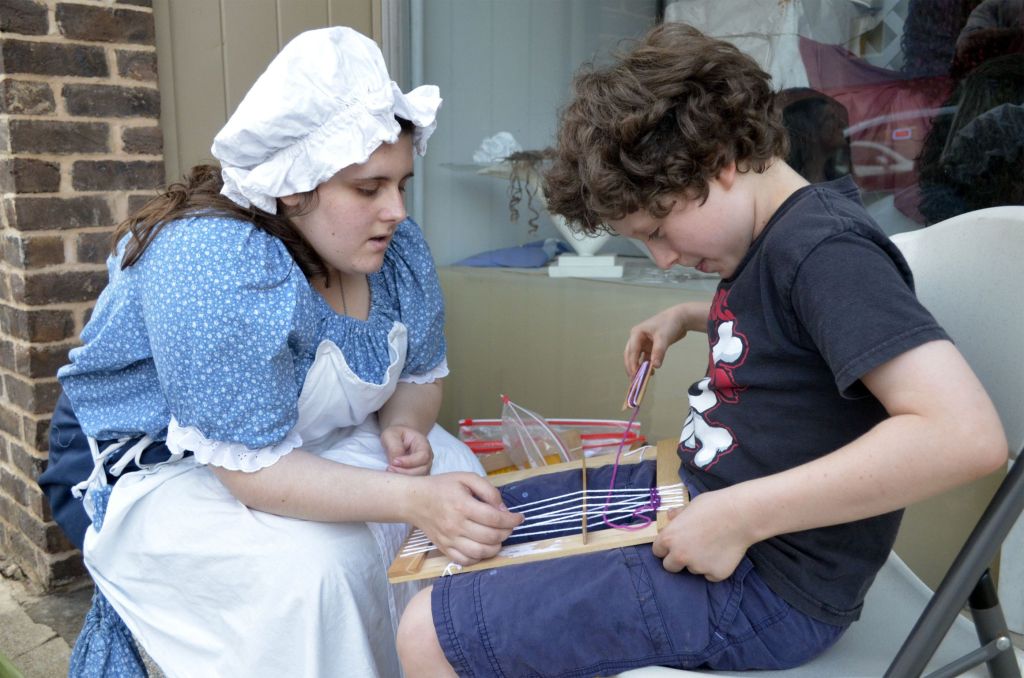 SALISBURY — A British soldier in a red coat marches up the North Main Street sidewalk, his sword buckled to his side.
A man in a beaver hat stands guard outside Fine Frame Gallery, keeping a watchful eye.
A girl in a blue print dress and a white cap teaches passers-by how to weave simple designs on a loom.
And shoppers fill the streets, looking for bargains and treats.
History and fun mixed themselves together at Founder’s First Friday, as volunteers from Rowan Museum entertained and educated visitors on the streets of downtown.
The event featured entertainment with costumed characters sharing their history, games for kids and a showing of the film “A Night at the Museum” inside the Rowan Museum itself.
The man who stood not far from the Square, wearing his beaver hat, was Robert Cochran, who volunteers with Rowan Museum and who’s a history buff.
Cochran said a lot of people don’t realize that Daniel Boone came to Salisbury, or that Boone’s parents are buried nearby.
He stood on the sidewalk with his long-barreled flintlock “fowling piece” — technically not a rifle, but a gun that would be used “by people who needed to put food on the table” — sharing facts and posing for pictures.
Riley Jones, who wore the blue Colonial dress, held her hand-loom on her lap and demonstrated the simple weaving technique for any who wanted to see.
A 19-year-old student at the University of North Carolina at Greensboro, Jones said she’s been coming to Rowan Museum events since she was a camper at the group’s Summer History Camp. She made the trip back for Founder’s First Friday.
Jones said her favorite part is seeing how kids react, such as one boy who kept watching, fascinated, as she was weaving.
“Just to see his wonderment each time he walked by,” Jones said, made it worthwhile.
A little later, a different boy, Daniel Pickett, got his chance to learn on the hand loom.
His parents, Syd and Emerald Pickett, said Daniel had also enjoyed learning some of the games kids would have played in Daniel Boone’s day, such as learning to roll a wooden hoop.
“It’s great,” Syd said, adding that the history made it a good event to come out to.
Merchants got into the spirit of the historical theme, with the Candy Shoppe on Main rewriting a sign out front as it might have looked in Colonial times:
Step like billio unto ye marchpane doors and gather some boiled sweets.
Cameron Smith, working inside the store, said he looked up the words with help from another staffer.
Smith, himself in costume, said “step like billio” means “vigorously.”
Shoppers stepped out, despite scattered clouds and a threat of rain, to visit the merchants who remained open until 8 p.m. for the event.
Among them was Mayor Paul Woodson and his wife, Beth, who stopped at Spanky’s for a bite to eat on their way to a play.
Woodson praised the realism of the actors and costumes, and said he hoped many other residents would take time to visit merchants and spend the evening in downtown Salisbury.
Outside his shop on East Council Street, local artist Clyde demonstrated calligraphy.
As 3-year-old Kynnlie Miller watched, Clyde carefully wrote her name with a quill pen dipped in ink.
“Did you know people used to write like that?” Clyde asked the girl.
She hesitated for a moment, and then said, “Yes.”
Kynnlie’s mother, Alexis, said the family had come downtown for the event and were planning to stay for the movie.
Back at the Square, Rowan Museum volunteer Theresa Pierce held copies of photos and told visitors about some of downtown’s history.
Fred and Marjie Aggers, of Salisbury, stopped to listen, then Fred told about his own family history.
“My sixth great-grandfather was one of the signers of the Declaration of Independence,” Fred Aggers said.
“John Morton, of Pennsylvania,” Aggers went on. “His name’s right under Benjamin Franklin’s.”
“This is what I love about history,” Pierce said, “is the stories.”
Contact Hugh Fisher via the editor’s desk at 704-797-4244.