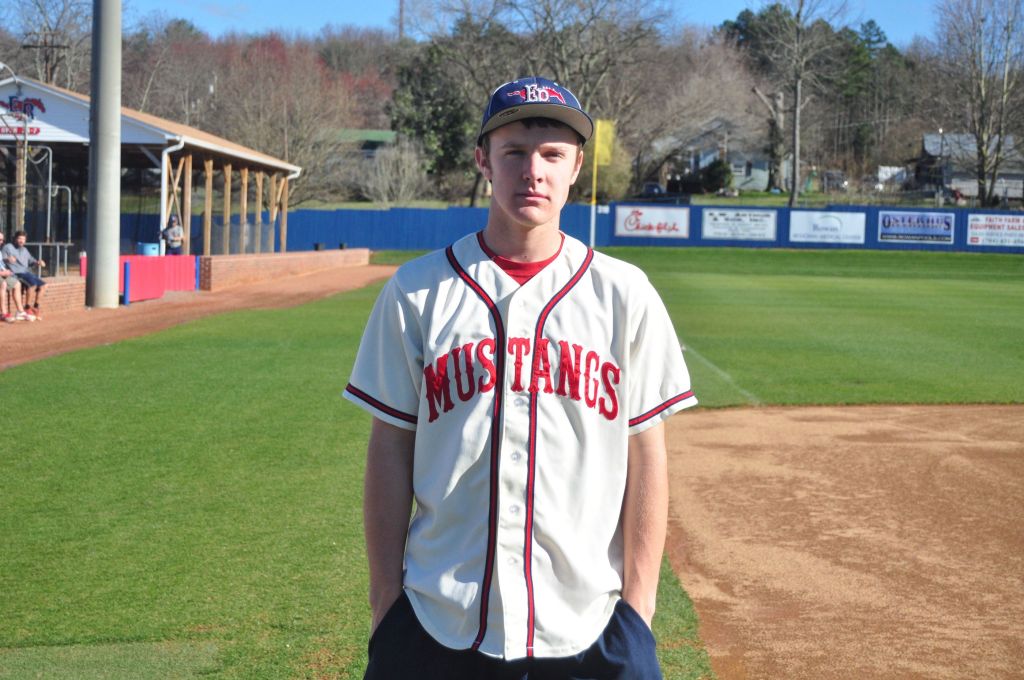 MOUNT ULLA — The big stage brought out a big performance from Chase Jarrett on Friday.
East Rowan’s senior righthander was the architect of a well-crafted two-hitter and the Mustangs tightened their grip on first place with a 4-1 SPC victory at West Rowan.
“Chase just manned-up tonight,” coach Brian Hightower said after East (10-5, 10-2) completed a two-game sweep of the Falcons. “He threw a lot of strikes — and that strike zone was kind of tight. But he just came out, filled it up and challenged guys.”
Jarrett pitched with visible confidence, blending a heavy fastball with a bathed-in-dirt curve to win his third game.. He benefited from three East double plays and faced only 25 batters.
“I’m on Cloud 9,” he smiled afterward. “I was a little nervous in the beginning, but once I settled in I was fine. We all were. It’s getting to grudge time and this gave us a little cushion.”
West (7-5, 6-4) didn’t go down quietly. Losing pitcher Michael Ball yielded only six hits and three earned runs in a complete-game effort and earned the praise of WR catcher Micheal Pinkston.
“He had good stuff,” the backstop said. “Out of their six hits only two or three of them were hit hard. He threw what he thought would get us out of trouble. In the end they just made more plays than we did.”
East’s defense was air-tight with one exception — Harrison Baucon’s first-inning grounder was booted by shortstop Ike Freenan. But Jarrett cleaned up the mess two batters later when he initiated an inning-ending 1-6-3 DP.
“The best thing I saw was when we turned that first double play and he showed all that emotion,” said Hightower. “Right there he proved to me he can throw in the big games and do the things you have to do to win. He competed like I’ve never seem him compete before.”
West scored the game’s first run in the bottom of the second. Nick Collins lined a leadoff, wind-blown triple down the right-field line. After Jarrett nearly escaped unharmed — he retired West’s next two batters — Collins scored on a wild pitch.
East answered with a pair of runs in its half of the third. Mason Doby ignited the rally when he served a one-out single into left-center and Seth Wyrick followed with a sharp grounder that skipped through the left side of West’s infield. With runners at second and third Michael Caldwell sent a bouncer in the hole that shortstop Jeremy Simpson fielded cleanly. Doby raced home from third with the tying run, but with Wyrick breaking from second base, Simpson correctly fired a throw to third-baseman Juan Garcia.
“It was the right play,” said West coach Chad Parker. “We’ve just got to execute it better.”
Instead, Simpson’s throw was low and eluded Garcia, allowing Wyrick to round third and hustle home with the go-ahead run.
“I saw the ball hit to shortstop,” Wyrick said after contributing two hits and two RBIs. “I knew I could get to third base. Even if Garcia had caught the throw, I think I would have had it.”
It was all the April fuel Jarrett needed. Now pitching with the lead, he retired 10 of the next 12 West hitters. East’s infield, meanwhile, stayed busy — recording nine groundouts and turning additional double plays in the third and seventh innings.
“We had momentum,” Wyrick said. “We knew if we gave Jarrett the lead he wasn’t going to give it up.”
Wyrick made sure of that when he lined a two-out, two-run single into right field in the top of the seventh. When Jarrett fanned Ball to end the swiftly played 86-minute match, the Mustangs had themselves a pivotal, late-season win — and a two-game lead in the standings.
“Winning is fun,” said East catcher Dustin Ritchie. “You can never get enough of it, but the season’s a long way from over.”
It might be West, now three games behind with six to play.
“It shows what we have to do now,” said Pinkston. “We can’t keep falling behind and trying to battle back. That’s not gonna do it.”