Carson and “The Johnnies” beat Concord 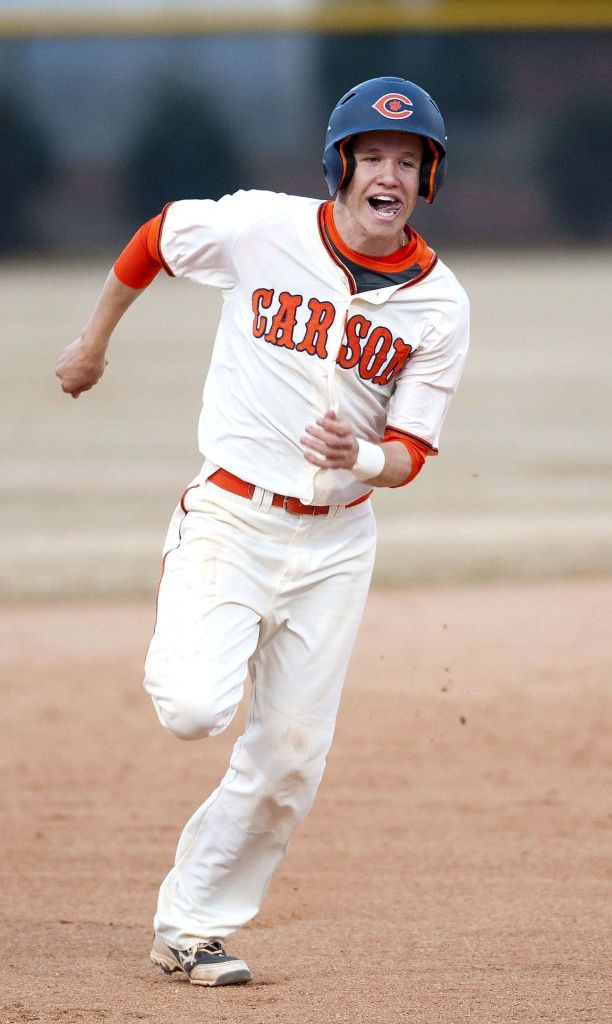 CHINA GROVE — You could have called Carson’s baseball team ‘The Johnnies’ Friday night and it wouldn’t have been a loose reference to St. Bonaventure.
It would be a tip of the cap to the seniors that shared the opening credits of the Cougars’ 7-4 win against Concord.
Pitcher John Daugherty pitched his second complete game of the season and second baseman John Patella went 4-for-4 with four singles as the Cougars won their third straight and completed a sweep of the Spiders.
Carson (10-4, 6-4) pounded out 13 hits and jumped into a tie for fourth place with West Rowan’s loss to East Rowan. A three-run third inning bolstered Carson to the lead as it held off its pesky guests to stay in playoff contention.
“We had offense tonight,” Daugherty said. “With offense, you’re going to win even if you mess up on defense.”
Daugherty retired the side in order three times and got out the final six batters he faced. The righty struck out 10 and overcame a pair of errors for his third win. Concord’s Chance Clark hit a home run on the second pitch of the night, but it didn’t startle Daugherty, one of three big senior hurlers for Carson.
“He filled the strike zone up and let the defensive make plays,” Carson coach Chris Cauble said. “He had quite a few strikeouts too so he was typical Daugherty.”
The Cougars ran off Concord pitcher Will Horsley after three as they had five straight reach base in the third. Drew Yoos came on in relief, but didn’t have answers. Patella got one of those hits to drive in a run and later scored on a double to deep center by Matt Saul. Saul’s hit gave Carson a 4-1 edge.
“I was seeing the ball and getting my hands back,” Patella said. “I finally felt comfortable at the plate.”
Concord came back with two runs in the fourth after a dropped ball in right field got Carter Monzingo on base to start the inning. Cody Franklin doubled in the inning and the Spiders and got another error to claw to within 4-3.
“We’ve been slumping at the plate but we swung the bats a little better,” Concord coach Jaymie Russ said. “We’ve got to tighten up in basically every facet of the game.”
Concord got consecutive singles to start the sixth from Franklin and Yoos and a sacrifice moved them into scoring position. Daugherty recovered to strike out the Spiders’ 8-9 hitters in Elijah Hill and Hunter Yow.
“He’s been money for us this year,” Cauble said of Daugherty.
Daugherty, 3-1, got a perfect seventh to end the night against the top of the lineup. A nice way to end a night that started after Clark’s third blast of the year was a bad omen as fans starting settling in their seats. Daugherty hit reset and struck out four of the next seven batters.
Patella singled to start the fifth and was sacrificed over by Saul. Christian Houpe got Patella over to third and Austin McNeill drove him in.
Leadoff hitter Michael Morrison tripled to center to score McNeill in the fifth and he scored on Heath Mitchem’s sacrifice fly. Carson catcher Bryson Prugh finished with three hits, an RBI and a run scored. Courtesy runner Brandon Sloop stole a base and scored two runs.
“Concord’s a good team and they just kept pecking away,” Cauble said. “We had to score every inning to at least have a little breathing room. The ball was carrying really good because the wind was blowing so much. Anything crazy that could happen might happen. We wanted to stay up a couple runs.”
Concord fell to 5-10 and 4-8 in the SPC.
Carson won the game without Colton Laws, who was out of action after having wisdom teeth removed. The Cougars are set for a home-and-home series with Northwest Cabarrus next week.