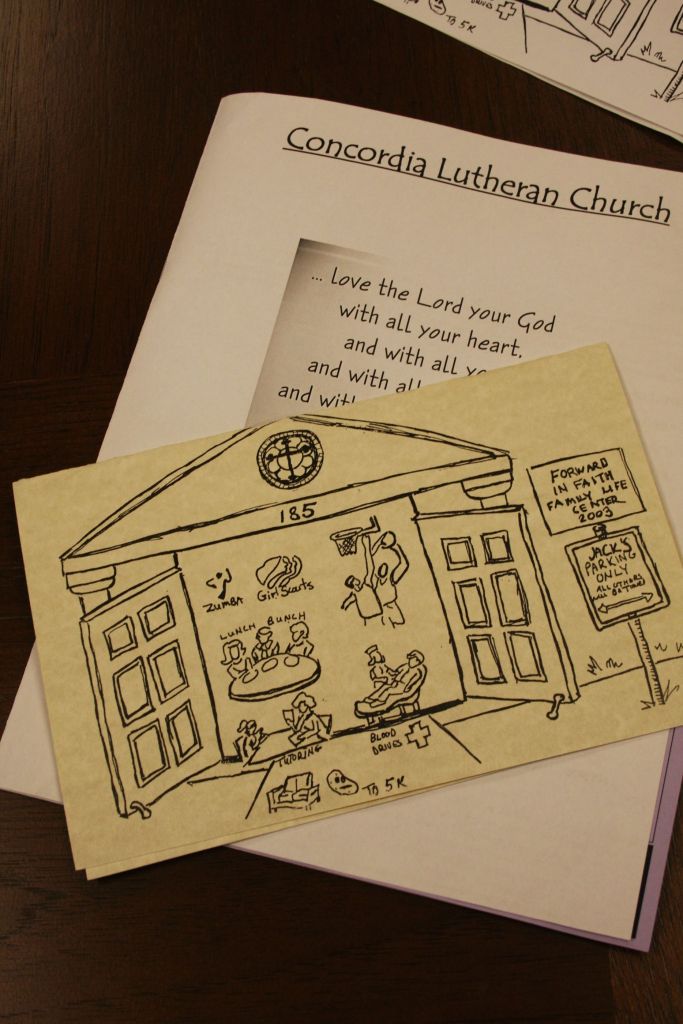 CHINA GROVE — This Sunday, Concordia Lutheran Church is planning a debt retirement celebration for its Family Life Center. Truth be told, it’s an old-fashioned mortgage burning party.
Of course, they won’t burn the actual mortgage, but anyone who wants can toss cut-up pieces of its copies into a giant cast-iron pot, and watch the financial commitment made more than 10 years ago go up in flames.
Payments for the $2 million facility were based on a 20-year mortgage, says Judy Haire, a member of the committee organizing Sunday’s festivities. Treasurer Carolyn Michael faithfully made the $10,000 monthly payments.
“Several times, I was able to pay more,” she says.
There was never any timeline to pay off the mortgage early, but there was a desire, says Omar Williams. Williams is another committee member who served as construction foreman for the project.
Williams took a sabbatical from his job so that he could be onsite during the construction period. He’s since retired, and takes care of the building’s maintenance, along with William Morrison, property committee chair.
The Rev. Ken Reed’s first Sunday at Concordia was the first Sunday the new building was used — on July 20, 2003. Of course, Reed was impressed by the facility, but what impressed him more was the process that went into it.
“Every step was intentionally based in prayer,” Reed says. “Prayer was planned, just like anything else. It was a part of the process.”
“It was such a joint effort with everyone,” says Haire, who notes that Concordia is not a wealthy congregation. Some 100 families pledged $867,000. “Most people I talked to were very receptive to building this building.”
The fundraising committee worked with Kay Conrad, who urged them to ask members for specific pledges, says Carolyn McLaughlin, another of Sunday’s committee members. She was also the first person to raise the possibility of a family life center, but she wasn’t ready for Conrad’s suggestion.
“I almost passed out,” she says.
“You can do that in urban and suburban congregations,” Reed notes. “But to do it successfully in a rural, farming community is a rare thing.”
Adds Williams, “We sat down and said, we don’t have a clue how much that person can afford. It was not in our nature. So we backed into it. We decided how much money we needed and then we grouped people together for giving amounts as best we could.”
However they came up with the method, it worked.
Also, Haire says, the committee had lead gifts from council members and key members. “We knew if we couldn’t get a substantial amount from those members, it wouldn’t work.”
The congregation held a celebration dinner for its Forward in Faith campaign at nearby First Methodist Church. At the end of the evening, Haire announced that advance pledges totaled more than $740,000. The remainder of the members did the rest. Fundraising events included a dinner theater and country faire and auction. That project alone raised $25,000.
Haire says that one member gave $100,000 and two others gave $50,000, but the remainder of the gifts were under $50,000. “We had gifts of stock and property. One man sold another man a truck and contributed that money to the building fund.”
At first, $2 million seemed a lot of money for the congregation to raise — until they visited similar facilities, some of which were even more costly.
And really, Williams says, $2 million was a lot to spend for bathrooms.
Say that again?
“The bathrooms drove this whole project,” Williams admits. Before, there were simply not enough restrooms in the sanctuary and education buildings. Even more embarrassingly, Williams notes, one very large guest singer once got stuck in the men’s bathroom stalls.
“We also had a desire to be more attractive to new members,” Williams adds.
They’ve definitely accomplished that goal. You’d be hard-pressed to find a more beautifully furnished facility. And yes, the multiple restrooms are fantastic.
The signature space in the Family Life Center is its fellowship hall, a 6,300-square-foot room that’s been used for any number of activities over the years. Williams ticks off a short list: basketball, volleyball, receptions, dinners, funeral visitations, youth concerts, tutoring, parish nursing, Zumba, the Couch Potatoes Runners Club, Red Cross blood drives and more. Tuesday is the only night of the week, he says, that there’s not a set activity scheduled.
The center also has 10 Sunday school rooms, a commercial kitchen, a nursery and “many restrooms,” Williams says.
Reed likes to call the center a community hub, and it certainly has been. The women of the church, with assistance from a Cannon Foundation Grant, added a playground in 2008. Since completion of the Family Life Center, other churches have come to visit to get ideas.
Of course, the 350-member congregation is not just sitting on its laurels, Reed says. “As we’ve been getting closer to this payoff, it’s been encouraging to hear little stirrings in the congregation: ‘It would be nice if we began to look at this.’”
With its facility paid off, members can focus more on what outreach programs they want to offer.
And that’s exactly why the theme of this Sunday’s service is “Faith Opens Doors.”
Freelance writer Susan Shinn lives in Salisbury.