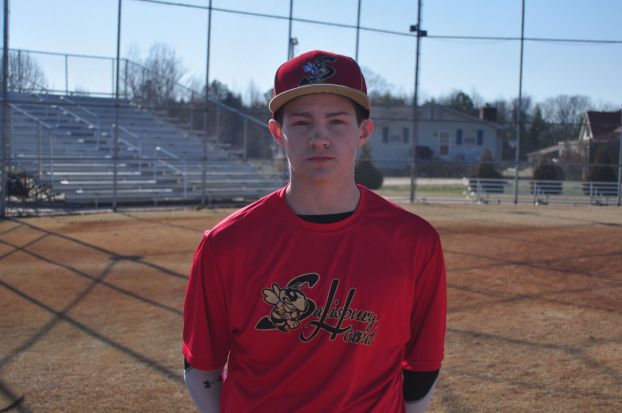 Hornets get revenge on Lexington

SALISBURY — Trying to escape a 10-game losing streak, Salisbury baseball coach Scott Maddox was willing to try something different.
The strategy worked as the Hornets pounded Lexington, 12-2, in five innings, here last night at Roberson Field.
Maddox juggled the lineup and also decided to let catcher Will Steinman call the pitches for junior right-hander Ryan Jones.
The new lineup went 13-for-25 (.520), with most of the damage turned in by the first four hitters.
Jones led off and was followed by Chance Bowden, Riley Myers and Harrison Smith. The quartet went 9-for-11, scored seven runs and drove in eight.
“We worked hard on our hitting on Wednesday but the main thing was to stop pressing so much and just have some fun,” Maddox. “We had more hits tonight than we had in the last four games.”
Smith had the biggest night at the plate, driving in five runs with two doubles and a single.
“We had been struggling with the two spot in the lineup, so moving Bowden there really made a difference,” added Maddox. “They helped us get on it early. Smith hit better tonight at cleanup than he had been hitting in the No. 2 hole.”
Meanwhile, Jones was dominating the Yellow Jackets en route to a two-hitter. He walked just two batters and struck out eight.
Jones was perfect for three frames, fanning five of the first nine batters he faced.
“Ryan pitched very well and he had struggled recently because of location and walking too many batters,” said Maddox. “Tonight, I turned it over to the catcher to call the pitches and Will did a great job with it.
“Ryan had a lot of confidence out there tonight and he should, with his kind of ability,” added Maddox. “He had it tonight and Lexington is not bad hitters. They go up there and take their hacks.”
With Jones coasting, the Salisbury hitters jumped on Lexington starter Kitrez Sanders for three runs in the first inning and four more in the second.
Sanders labored during the two big innings, throwing 53 pitches.
Smith had the big blows in both innings, a two-run double and a single that plated two.
After the Jackets cut the deficit to 7-2 in the top of the fourth, Salisbury put the game away with five runs in the bottom of the inning.
Smith cranked another run-scoring double in the game-clinching rally while Steinman and Harper Miller had RBI-singles.
Myers had two hits and two RBI, Jones had two hits and two stolen bases and Bowden went 2-for-2. One of Bowden’s hits was a perfect hit-and-run single that he stroked to right field, keying the five-run, fourth inning rally.
A bunt single by Clay Swaim kept the rally going, as did a Miller ground ball to shortstop that was booted. Alex Yang followed with a RBI-single for the Hornets’ 12th run, enough for the 10-run rule to take effect.
Jones had only the one bad inning, throwing 29 of his 73 pitches in the Yellow Jackets’ two-run fourth.
“Lexington has better hitters than in past years and I just got the ball up a little in that one inning,” said Jones. “They did their job and hit the ball when I missed my spots. But we battled back at the plate and got those runs back and then some.”
Luke Bess drove in the first Lexington run with a sacrifice fly in their brief rally and Chaz Hill added a run-scoring single.
Jones then struck out Sanders to end the Yellow Jackets’ only good inning at the plate.
Salisbury improves to 2-10 overall and 1-3 in the Central Carolinas Conference. Lexington, also 1-3 in the CCC, falls to 3-6.