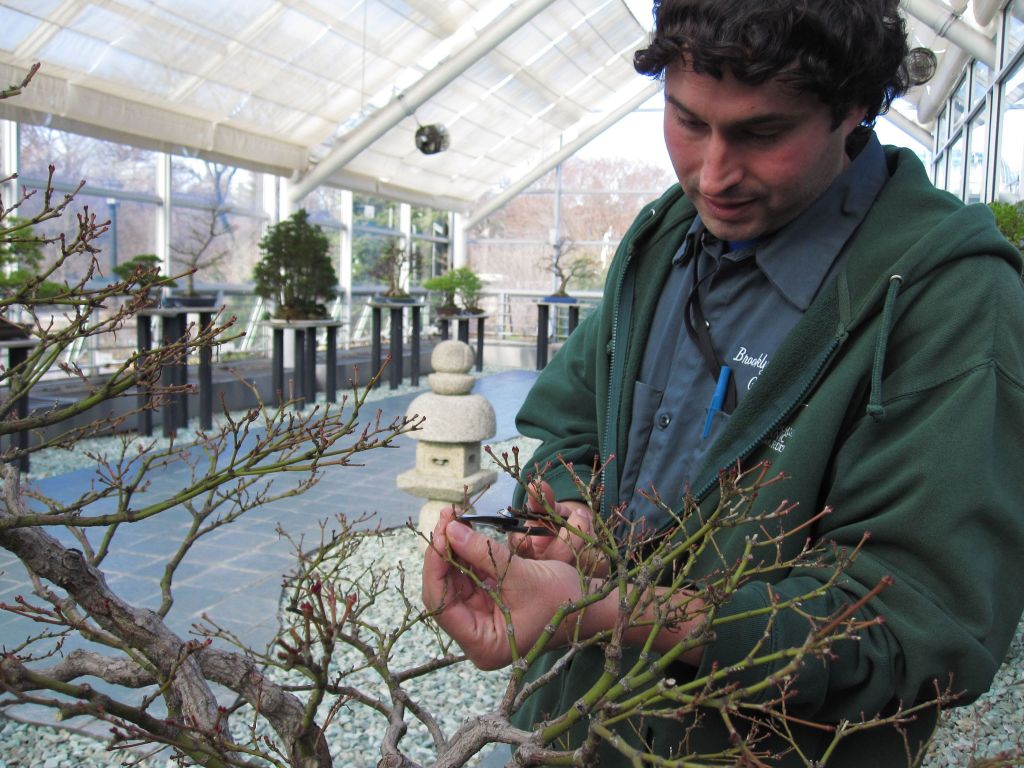 NEW YORK — Many people have a bonsai story: a first bonsai, a struggling bonsai. And many of these stories do not end happily, at least for the bonsai.
But the very best bonsai stories are about passion and beauty and transformation.
“A dewdrop hanging for a split-second — that is bonsai,” said Julian Velasco, the curator of the Brooklyn Botanic Garden’s bonsai collection and C.V. Starr Bonsai Museum. “It’s very Zen-like. It’s awesome.”
For Velasco, who nurtures over 350 bonsai trees at the botanic garden — one of the largest and oldest bonsai collections on public display outside Japan — it all started with a bonsai he purchased as a young man at a street fair in San Francisco.
“Pretty quickly … I knew it would be a lifelong path,” he said.
Bonsai is horticulture, art, philosophy and even a way of life in the form of a single tree, lovingly pruned and trained to exist in a small pot so that it reflects the majesty of the natural environment, he explained.
“When you see the Grand Canyon or Yosemite, you are taking in the emotion of the place as much as the visual image,” and bonsai is about that emotion, he said. It is the haiku of the tree world.
Luckily for beginners, who have not yet attained a level of oneness with their new bonsai, learning to nurture a bonsai has never been easier. Expert help, once found only in Japan or China, is now more readily available at bonsai clubs and shops around the world. The American Bonsai Society lists bonsai clubs across the United States and Canada, and Bonsai Clubs International lists clubs worldwide.
“Most U.S. states now have at least a couple of bonsai societies, and interest seems to be growing,” said David Bogan of Evansville, Indiana, who is on the board of the American Bonsai Society.
“About 30 years ago a friend brought a bonsai for me from Hawaii, and I’ve been hooked ever since. Now my wife and I have hundreds of bonsai,” he said. “Bonsai are a long-term commitment, though, and most take at least a decade to create. Some can hardly go a day without some kind of care. It’s almost like having a pet.”
Bonsai, Japanese for “planted in a tray,” originated in China in around 200 A.D., and the art spread several hundred years later to Japan. The art of bonsai was introduced to the U.S. in the late 19th and early 20th centuries, and at least one of the Brooklyn Botanic Garden bonsais is over 200 years old.
Although Velasco said the ultimate goal is to “open your heart to the tree,” he has a few more practical tips for novices.
The first is to choose a variety of tree suited to your environment. Bonsai are trees or shrubs, and most varieties should be grown outside, where they require a period of dormancy in winter.
For most people, however, who want to grow their bonsai indoors or keep them outdoors only in warmer months, tropical varieties like the ficus or Australian brush cherry, with its interesting flower and bark, are good choices. Both are sturdy enough to endure a few beginners’ mistakes, do well indoors and can be kept outside so long as temperatures are above 60 degrees.
Another good option, particularly for people with access to an outdoor growing space, is Chinese elm, which is adaptable and can also be grown indoors.
The next step along the continuum of hardiness is junipers, particularly Chinese and procumbens varieties. Small varieties of azaleas, which are sturdy with nice leaves and flowers, are also popular among bonsai enthusiasts, Velasco said.
Outdoor bonsai are delicate, however, and need to be protected once temperatures reach 20 degrees and colder.
“Most people will bury just the pot part of the bonsai in soil and mulch up against a house or fence to protect it from drying winds. Burying the pot evens out the temperature for the roots so there are no sudden drops or super hard freezes,” Velasco said.
Another strategy is burying just the pot part of the bonsai under a bench in the winter, and covering the bench with some clear plastic.
In addition to selecting the right variety, beginners need to understand bonsai stress and watering, Velasco said.
“A lot of times people bring home a bonsai and it drops its leaves and looks unwell. It’s just stressed out. It needs time to adjust, and a little patience,” he explained.
“Monitor the water very carefully. Without leaves it won’t need as much water. Hold off on water until the soil dries out. And little by little, when you hold off on water, buds will start to appear. And as that starts to happen, the need for water will start to increase.”
Many bonsai growers keep the tip of a chopstick deep in the soil toward the back of the pot as a moisture gauge.
“If the chopstick is moist you don’t need to water. But you never want the roots in the pot to get completely dry. Water it only when it’s almost dry,” Velasco said.
Water from the top down and make sure the water drains out the bottom of the pot.
As for pruning, allow the tree to grow five to seven leaves before pruning it back by about two leaves of the new growth, Velasco said.
“Only prune what’s actively growing. Trees need to grow to be happy and healthy,” he said.
“If you’re on top of your game, the tree will repay you by being healthy and beautiful. Just try to appreciate what the bonsai is trying to express to you.”