All that jazz of ‘Chicago’ heats up the night 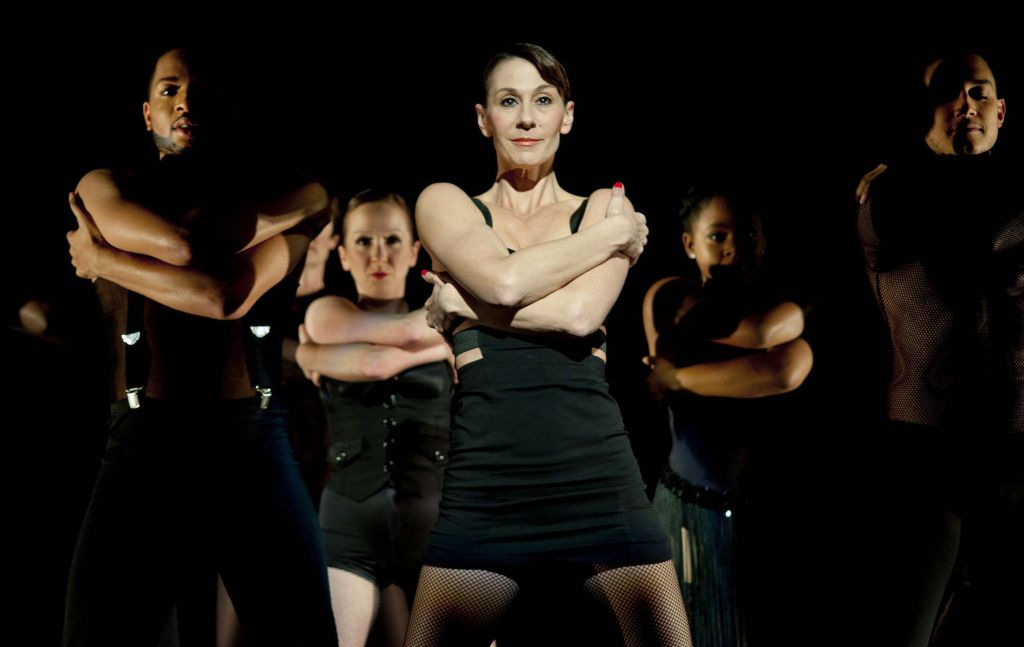 When you leave Piedmont Player’s production of “Chicago,” you’ll be humming “All That Jazz” for days, guaranteed.

Or maybe it’ll be “Mr. Cellophane,” since they’re basically the same tune.

This production is something familiar — you’ve seen it in the movies or on television — with the skimpy black costumes, the suggestive dance moves and a brassy jazz orchestra.

A simple-as-can-be set puts the musicians in the middle and the dancers are right out in front, on the edge of the stage. Sometimes it looks like they’ll tumble all over, but they slither and they shimmy around each other.

There’s no redemption here, though maybe you could call it just desserts. Roxy Hart murders her lover and joins the lively band of murderesses in the Chicago jail. Everyone is innocent, of course. But it helps to drop $5,000 on Billy Flynn, famous for getting ladies off the hook.

Roxy steals the show from Velma Kelly, an earlier murderess who’s waiting for her trial to come up. Velma is the star of the jail, until Roxy comes along.

Ashlyn Keller Sumner is Velma, with an angular body and a world-weary smile, she sees her star falling, but keeps trying to drag it back out and polish it up.

Karen Christensen is the brittle, spoiled Roxy. She’s pretty and jazzy and hot, and married to Mr. Cellophane himself, mechanic Amos Hart, played with exactly the right amount of self-deprecation by Josh Wainwright, Piedmont’s marketing director.

Jordan Clifton is slick and insincere, just like Billy Flynn should be. The audience loves his smarmy number, “All I Care About,” with the ensemble of girls fluttering their feather fans.

In fact, the opening night audience loved it all, applauding loudly and giving the cast a standing ovation at the end.

Throw in the huge, impressive voice of Alexis Greer as Mama Morton, matron to the incarcerated girls, and you’ve got more instant karma. Audiences love Greer, and she gives them what they want. Just like Mama Morton gets what she wants from her girls.

And, just for fun, toss in a little Mary Sunshine, played by Jura Davis — is she or isn’t she? Something about her is just a little … well, wait until the end to see.

Edward Whitney, who’s all over Piedmont’s stage these days, has the interesting cameo of dead lover Fred Casely. He knows how to play for comedy, and the interaction between him and Roxy is well done.

A large ensemble makes for a pretty good dance group, considering these are not the dances you do at the prom, or the Heart Ball. The Woodson twins, James and John, look good and show their stage experience well. Wendy Weant is heartbreaking as Hunak, the not guilty Hungarian woman. Look for lots of splits and display of legs in multiple positions.

They dance together, which is an absolute must, and have got the writhing, body-wrapping moves down well. They remember to smile when it’s a fun number and scowl when it’s serious. The ensemble is an important part of “Chicago,” giving it the Bob Fosse trademark look. Fosse was a famous choreographer known for his overtly sexual style.

Roxy and Velma — or Sumner and Christensen — play well off each other. Velma looks at Roxy as an over confidant kid, and Roxy thinks Velma is just over.

It’s fun to watch Flynn school Roxy to be a sympathetic killer, a sympathetic, pregnant killer, though she’s a pretty rough character to polish into a diamond. Roxy sees her name in bright lights in the big city, but then, the next big thing comes along.

The moral is dreams are all right, but you better have a back-up dream in mind, too. Yes, you can get away with murder, but it doesn’t necessarily get you on the big stage.

Kudos to the orchestra of brass and strings, with plenty of percussion, conducted by Mike Wilkins in a most interactive way.

Tod A. Kubo directed and choreographed the show, Resident Director Reid Leonard is responsible for the stage and lighting design.

Ed Brown, who’s a huge fan of “Chicago” and theater in general, is a producing partner of the show, along with Fibrant. On opening night, Brown was a happy man.

Opening night intermission ran a bit long, and the show was over at 10 p.m.