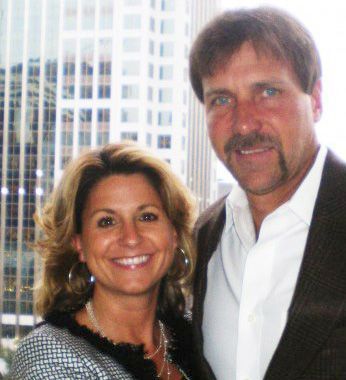 SALISBURY — Two Catawba College alumni have made a gift to establish a new scholarship at their alma mater. The Mark and Paula Domske Endowed Scholarship Fund will provide assistance to able and deserving students without stipulation to the recipient student’s academic major or geographic location.
Mark and Paula are both Pennsylvania natives who met at Potomac State University in West Virginia. Mark received a scholarship to play football at Catawba, so they both moved to North Carolina to continue their education. Being scholarship recipients, they know firsthand how valuable that kind of financial support and determination and hard work can be to a student pursuing a college degree.
“Don’t be upset with the results you didn’t get with the work you didn’t do,” the two are quick to say. The Domskes realize that in all things, including the completion of a college degree, one gets out of it what one puts into it.
Mark hails from Washington, Pa., and graduated in 1987 with a degree in education-middle school science. He played football at Catawba during his sophomore, junior and senior years and was a member of Phi Epsilon, an honorary scholastic society.
Paula, whose maiden name is Graffius, hails from Dillsburg, Pa., and graduated in 1988 with a degree in communication arts and a minor in English literature. She was a cheerleader during her years at Catawba. She has also served on Catawba’s alumni board of directors.
Even in the years immediately following their graduations, the Domskes gave back to their alma mater, as Chiefs Club members, as members of The Grid Iron Club, and as supporters of the Shuford Stadium campaign effort. With the help of a fellow graduate, they started the Homecoming Golf Tournament held every year during homecoming. Many of Catawba’s alumni know Mark as the “egg man” because every year Mark and Paula set up a well-visited tailgate station with the help of some great friends and fellow alumni. You can count on a double yolk egg served on a bun with whole hog barbecue.
The Domskes are parents of two young adult daughters, Mackenzie and Aspen, and now live in West Jefferson and Salisbury. Both Mark and Paula have been working since 1993 in the business they established, Bushhog America.
Jacquelyn Loy, a Catawba College theatre arts major from Burlington who will graduate in May, won the Southeastern Theatre Conference’s 2014 Marian A. Smith Costume Scholar Award.
Loy, who has completed her coursework at Catawba, is beginning her graduate studies at University of Southern Mississippi where she is pursuing an MFA in costume design and technology.
The Marian A. Smith Scholarship is awarded each year to a student pursuing a graduate degree in costume design and/or technology. The award is named after Marian A. Smith, who served as executive director of SETC for 26 years.
At Catawba, Loy completed a theater arts major with a focus in costume design and technology, with minors in studio art and English. While a student, she served as a member of Phi Epsilon, the college Honors Students council, and the Blue Masque, a students’ theatrical organization, and was president and business manager for Catawba’s chapter of Alpha Psi Omega, a national dramatic honors society. She was a costume shop assistant at Catawba and in that role led in construction, alterations, pulling and organization of costumes for the college’s six to eight shows each season. She served as lead costume designer for several productions.
During her summers, she has worked with St. Thomas Players in Salisbury as a costume designer and general technical intern, with Castleton Festival Opera as a stitcher and principal dresser, and with Central Piedmont Summer Theatre as a stitcher.
For details on the SETC visit www.setc.org.
Eight Catawba College students and a faculty member attended the 247th National American Chemical Society Conference March 16-20 in Dallas, Texas. While there, the students made presentations about their research.
Dr. Mark Sabo, professor of chemistry, and the following students attended the conference: Juliana Conte of Hampton, Ontario, Thomas Benton of Salisbury, Aliyah Khan of China Grove, Linda Castillo Murillo of China Grove, Frank Villa Hernandez of Kannapolis, Amber Williamson of Lexington, Mary Podgorak-Lagro of Salisbury and Brooke Baumgarten of Hayesville.
These students helped author and presented the following research topics along with members of the University of North Carolina at Chapel Hill Nutrition Research Institute:
• Investigating Peroxidation of Lipid by Heme-Artemisinin Adducts in vitro; Juliana Conte1, Thomas Benton, Carmony Hartwig and Mark Sabo, Catawba College, department of biology and department of chemistry.
• Quantification of Choline Metabolites in Raw and Cooked Meats Using LC/SRM/MS and Stable Isotope Dilution; Aliyah Khan1, Thomas Benton, Xueqing Zhao, Steven Zeisel, Shucha Zhang,
• Quantification of Choline Metabolites in Rat Tissues Using LC/SRM/MS and Stable Isotope Dilution; Thomas Benton, Aliyah Khan, Xueqing Zhao, Walter Benjamin Friday, Steven Zeisel, Shucha Zhang.
• Analysis of transverse tubule disruption in mice cardiomyocytes; Linda Castillo Murillo, Janet Manning, John Penn, Catherine Kaminski, Jonathan Satin and Douglas Andres. Some are members of the University of Kentucky College of Medicine in Lexington, Ky.
• Immunoprecipitation of immunoglobulin gamma-transferrin complex; Frank Villa Hernandez, Joseph J. Otto and Lewis K. Pannell; some are involved in the Pannell Proteomics Lab, Mitchell Cancer Institute, University of South Alabama, Mobile.
• Catawba College ACS: Changing Lives One Joule at a Time; Linda Castillo Murillo, Frank Villa Hernandez, Amber Williamson, Mary Podgorak-Lagro, Brooke Baumgarten, Mark Sabo, Carol Ann Miderski, Richard Macri.