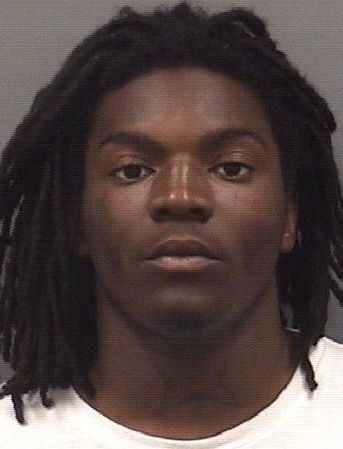 Police charged a man with felony possession of crack cocaine Tuesday after responding to a call of shots fired.
Derrick Dashawn Brown, 19, was given a $1,500 secured bond and placed in the Rowan County jail.
Officers were called around 4:40 p.m. to the 400 block of Grim Street, the same area where three people were shot almost two weeks ago.
Authorities said Brown was engaged in an argument with his mother, who allegedly wanted him out of the house because he wanted “to bring a girl in.”
Brown “said he couldn’t because he has a monitor on his ankle, so he couldn’t go far away,” Police Capt. Shelia Lingle said.
Officers separated Brown from his mother and spoke to each individually.
As Brown sat in a lawn chair, one of the officers on scene sitting with him observed him continuously putting his hands in his pockets.
“They kept telling him to take his hands out of his pockets,” Lingle said. “They looked under the chair where he kept doing it and found a bag of crack cocaine.”
The bag contained multiple rocks, which combined for a total weight of one gram.
In other Salisbury Police Department reports:
• A woman reported her car stolen between 10 p.m. Monday and 7:29 a.m. Tuesday in the 800 block of Ivy Street.
• A woman reported items stolen from her car between 3:28 p.m. Saturday and 3 p.m. Tuesday in the 500 block of Carolina Boulevard.
• A man reported being physically assaulted around 4 p.m. Tuesday in the 2100 block of South Martin Luther King Jr. Avenue.
• A woman reported someone stole her wallet by picking her pocket between 1 p.m. and 2 p.m. Tuesday in the 100 block of North Arlington Street.
• A resident in the 100 block of Reamer Circle reported his identity stolen and used for fraud between August 2009 and Tuesday.
• Russell L. Samples, 41, was charged Sunday with misdemeanor larceny in the 300 block of Oakwood Avenue.
• Antwan Demon House, 33, was charged Monday with misdemeanor larceny in the 300 block of South Arlington Street.
• Deante Lamont Banks, 22, was charged Tuesday with misdemeanor assault by pointing a gun in the 500 block of East Lafayette Street.
• Roger Garcia, 21, was charged Tuesday with felony receiving or transferring stolen vehicles in the 900 block of Mooresville Road.
In Rowan County Sheriff’s Office reports:
• A woman reported she was a victim of fraud between 12:30 p.m. and 1:15 p.m. Monday in the 100 block of Beechwood Drive.
• A woman reported a larceny happened between noon Nov. 22 and 4:45 p.m. Monday in the 2500 block of Mooresville Road.
• A woman reported she was a victim of credit card fraud between 3 p.m. and 7:10 p.m. Monday in the 200 block of Rhema Lane.
• Fatina Lachey Gibson, 40, was charged with felony identity theft in the 100 block of West Liberty Street.