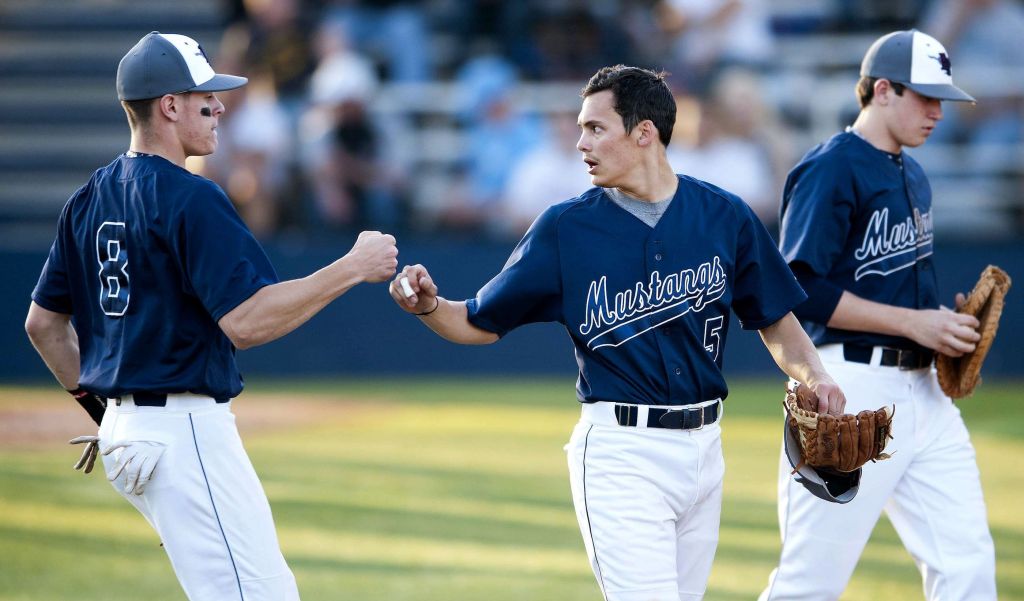 GRANITE QUARRY — All slightly quirky lefties need a nickname and “Sundown” seems to fit East Rowan senior Connor Johnson.
Johnson was just OK in the early innings in Tuesday’s SPC showdown with West Rowan at Staton Field, but as it got darker and cooler, the radar guns were showing 87s and 88s, East was headed to a 6-3 victory and Johnson personally was headed to 6-0.
“Connor loves the cold and every time he’s pitched this year it’s been ice-cold,” East coach Brian Hightower said. “But it was nice today and I think that’s why he started out sluggish. But once the sun went down, he got stronger and stronger.”
Johnson retired nine of the last 10 he faced and finished with nine strikeouts.
It was a brawl for the Mustangs, even with Johnson throwing. The Falcons took the lead twice, 2-0 in the third, and then 3-2 in the fourth.
“That guy they put on the mound is tough, so I can’t argue with that we did offensively,” West coach Chad Parker said. “We battled Johnson all the way. We had good at-bats, and we executed some things. It was just a game we let escape from us defensively.”
West (7-4, 6-3) saw it escape on one pivotal play in the East sixth. It was 3-3, and the Mustangs had loaded the bases with one out on singles by Mason Doby, Michael Caldwell and Ty Beck.
Ike Freeman, East’s best hitter, was next, but West’s crafty right-hander Omar Bautista got exactly what he wanted — a bouncer to third baseman Juan Garcia.
Garcia fired home to catcher Michael Pinkston for a forceout, and Pinkston tried to complete an inning-ending double play by whipping the ball to first baseman Tyler Poteat.
You couldn’t fault Pinkston, who made a solid throw, and it was hard to fault Poteat either because Freeman arrived at first at the same time as the ball, and Poteat just couldn’t glove it.
“Looking back, maybe I should never have thrown it, but hindsight is 20/20,” Pinkston said. “I knew it was going to be a tough play. I knew that the runner was going to be right at the bag.”
Pinkston gunned out three would-be basestealers and he was an eyelash away from another great play, but when the ball got through, East had the go-ahead run that proved decisive. Then the Mustangs got two more when Dustin Ritchie punched a two-run single into left. That made it 6-3 and ended Bautista’s night.
“Bautista is an amazing pitcher with some great off-speed stuff,” Caldwell said. “But when Johnson pitches, we’ve got all the confidence in the world and we believe that in the late innings, there’s nobody better than us.”
Four of West’s seven hits, including a wicked double to right-center by Baucom, an infield hit by Jeremy Simpson and solid RBI singles up the middle by Pinkston and Garcia came in the third inning.
Bautista worked out of a base-loaded,no-outs mess in the second with a strikeout and a 6-4-3 double play, a feat that gave West a lot of momentum.
East got RBI singles from Freeman, Luke Setzer and Caldwell as it fought back to a 3-all deadlock.
In the end it came down to that near-miss double play — and Johnson.
“We’ve got a good team, but we’ve got to show it when the lights are bright and the surroundings are tough,” Parker said. “That play in the sixth was a tough play, but if we’re going to take that step from good to great, we’ve got to win that play.”
Winning is something Johnson does regularly, and the tougher it is, the better he likes it.
“With Omar pitching for them, I knew this wasn’t going to be an easy breeze,” Johnson said. “Warm weather was something different, and I did struggle some. But I fought my way back and threw the best I could.”
East (9-2, 9-5) stays on top in the SPC. The teams are scheduled to square off again Friday in Mt. Ulla.
“Right now, East is the best team,” Pinkston said. “But we’ve got another chance to beat them.”