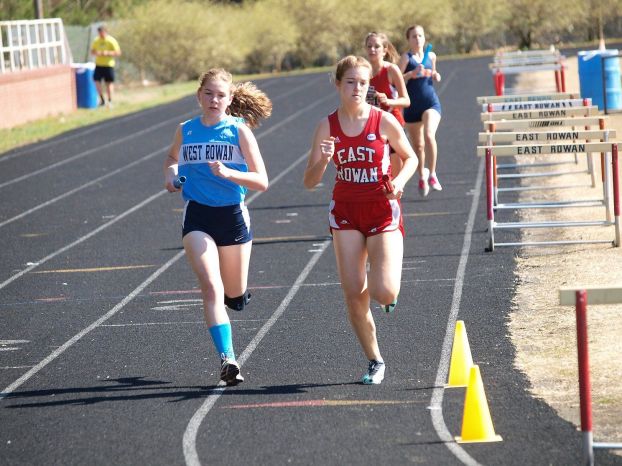 GRANITE QUARRY — It’s called reverse psychology and it worked wonders for East Rowan’s girls track team.
Head coach Rebecca Cooper told her team she had crunched the numbers and done the math before the Mustangs even arrived for Tuesday’s county meet. And a second consecutive title, she forewarned, wasn’t part of the equation.
“I went through and looked at how everyone was seeded,” Cooper said. “And I figured we’d be 20 points behind when it was all over.”
Like any other sport, you don’t run the meet on paper. East (178)surprised everyone — including itself — and rolled to the championship, outpointing runnerup West Rowan (111.5) and third-place finisher Salisbury (86).
“We thought (Cooper) was pulling an April Fool’s joke,” ER sophomore Brittany Small said. “She said we were gonna lose by 20, that it was gonna be really hard. I guess she was trying to motivate us.”
It worked. East claimed only two individual champions and prevailed in just one of the four relays, yet emerged smelling like a tray of cinnamon buns.
“You don’t have to win everything,” Cooper said. “You don’t have to come in first place to build up points. First place is 10 points, but if we have a third, fourth and fifth we get more in that event. And that’s exactly what we did.”
East winners included Small in the high jump (5-4) and — teammate Jocelyn Lowe was second (4-10) — Tori Gaul in the 300 hurdles (50.40). Both girls teamed with Haley Lyerly and Taylor Hodges on the winning 4 x 400 relay team (4:31.70).
“It was kind of an unreal feeling today,” said Gaul, a senior who was catching for East’s softball team a year ago. “I never thought I could run this fast.”
Gaul (28.09) also placed second to North Rowan’s Payton Russell (26.91) in the 200 and cleared 8-6 to finish second to South Rowan’s Dakotah Lambert (also 8-6) in the pole vault.
“This was an awesome day,” Gaul said afterward. “I love being part of a winning team and I loved that I could contribute.”
East sophomore Shenique Pharr had a less spectacular but equally impressive meet. She was second in three events: the triple jump (32-10), the long jump (16-2 3/4) and ER’s 4 x 100 relay (52.23), which was bested by Salisbury (52.37).
“It’s hard to be satisfied with second place,” Pharr said afterward. “It’s disappointing, but it should motivate me to be better.”
Pharr was edged in both jumping events by West sophomore Khaila Hall. “I’m a rookie,” she said. “It’s the first time I’ve ever done this. I got over some scary first moments.”
Hall won the long jump with a leap of 16-10 and the triple with a 35-0. She also captured the 100 dash in 13.06 seconds.
“No one really knew about me until today,” she said while receiving post-meet congratulations. “I did something no one expected. I didn’t expect it.”
•

Salisbury senior Cheyenne Gloster flashed her signature look in the shot and discus, winning each event for the second time. Her throw of 112 feet, 2 inches cleared the room in the discus and her 34-11 topped all competitors in the shot.
“I was really upset with the discus,” said the Winston-Salem state signee. “I had a 144 in the finals but scratched because it curved out. After that, I had to make it count in the shot.”
Gloster was challenged only by North freshman Chevy Blaire, whose 33-5 was good for second place.
•

SALISBURY — With or without its No. 1 player, the Salisbury boys tennis team evolves. The Hornets (11-0) didn’t have... read more