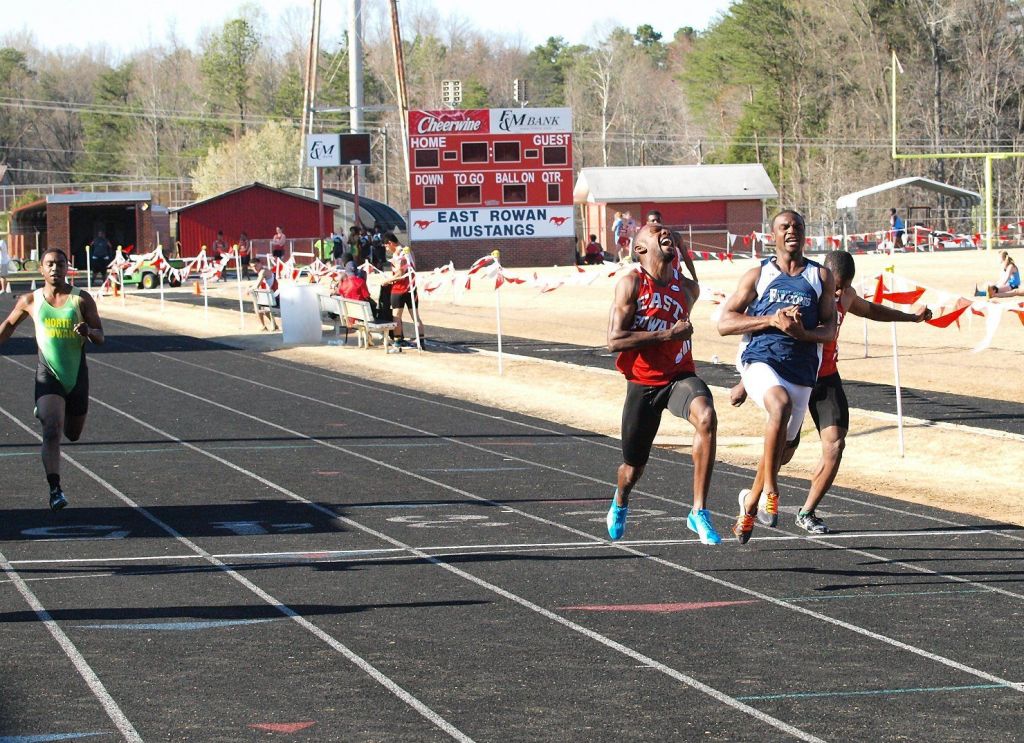 GRANITE QUARRY — If speed truly kills, East Rowan’s boys track team is guilty as charged.
At least it was Tuesday, when the Mustangs culled 60 points in the sprints and hurdles and ran away with their second straight county championship.
“I think our speed surprised other people,” coach Jason Barnes said after East totaled 190 team points and easily outdistanced runnersup Carson (122) and West Rowan (108). “East Rowan unfortunately has had that stigma where we don’t have sprinters, we just have distance runners. Now we’ve got the guys who can score points and win those sprint events. Things are changing a little.”
They changed for East junior Josh Little, who captured the 100-meter dash 11.24 seconds, the 200 in 22.95 and was a member of its winning 4 x 100 relay team.
“Little comes up big for East,” he declared when asked to suggest a headline for his effort. “I just felt fast today.”
Little edged West’s Daisean Reddick (11.36) to win the 100. “He gave me a good 70 meters,” Little said afterward. “And then, I don’t know. I think he tightened up and I found myself alone.”
East also won the 4 x 400 relay in 3:36.50 — nearly seven seconds faster than its qualifying time. The team included Conor Honeycutt, Devoniel Dale, Charles Goff and Josh Moses. Favored West was a disappointing sixth.
“That was the capper,” Barnes said with a beaming smile. “I have no clue what the incentive was other than to just beat everybody handily.”
Honeycutt had the kind of day post-season awards are made for. He placed first in the 800 (2:01.74), the 1600 (4:39.77), led off the winning 4 x 400 relay and ran the first leg of the 4 x 800 relay, which finished 20 seconds behind the Carson (8:32.12) entry.
“We’re getting stronger in all events,” Honeycutt said after East won the county meet for the seventh time in eight years. “We all knew what we wanted today. I did, and I was going to do whatever it took to win.”
Barnes called Honeycutt “Superman” in a passing moment and later added, “You can put him in just about any event and he’ll do well.”
So did East pole vaulters Wesley Haynes and Colton Trexler. Each cleared 13 feet to finish first and second, respectively, but the big surprise was that teammate Marshall Shank — the two-time defending champion and a heavy favorite — no-heighted at 13 feet and failed to place. He had cleared 14-0 to qualify, but failed three times at 13-0 yesterday.
“Normally we all jump about the same,” said Haynes, a junior who hoped to surpass 13-6. “I was trying really hard today, but I’m not going anywhere with this. I’m just jumping for the fun of it.”
So were the rest of the Mustangs once the final team scores were announced.
“I can’t be more happy for these guys right now,” Barnes said. “They put in the work. They put in the effort. All I’ve done was blow a whistle and say ‘Go.’”
•

Carson rode the shoulders, hips and arms of MyQuon Stout and Tre Williams to finish second. The Cougar tandem finished 1-2 in both the shot put and discus — for the third straight year.
“It’s my senior year and I wanted it to be real special,” said Stout, who won the shot with a throw of 55 feet, four inches and the discus with a career-best 170-4. “But it was really just another day. The only thing I told myself is don’t stress. If you start stressing, you could choke.”
For Williams it was as normal as cream cheese on a bagel. His shot (46-10) and discus (147-7) throws were personal bests, just not enough to overcome Stout.
“This was one of the last times we’ll go against each other,” he said with a sigh. “But it’s good competition and we both get points for the team.”
•