A peek behind the scenes at the NC Transportation Museum 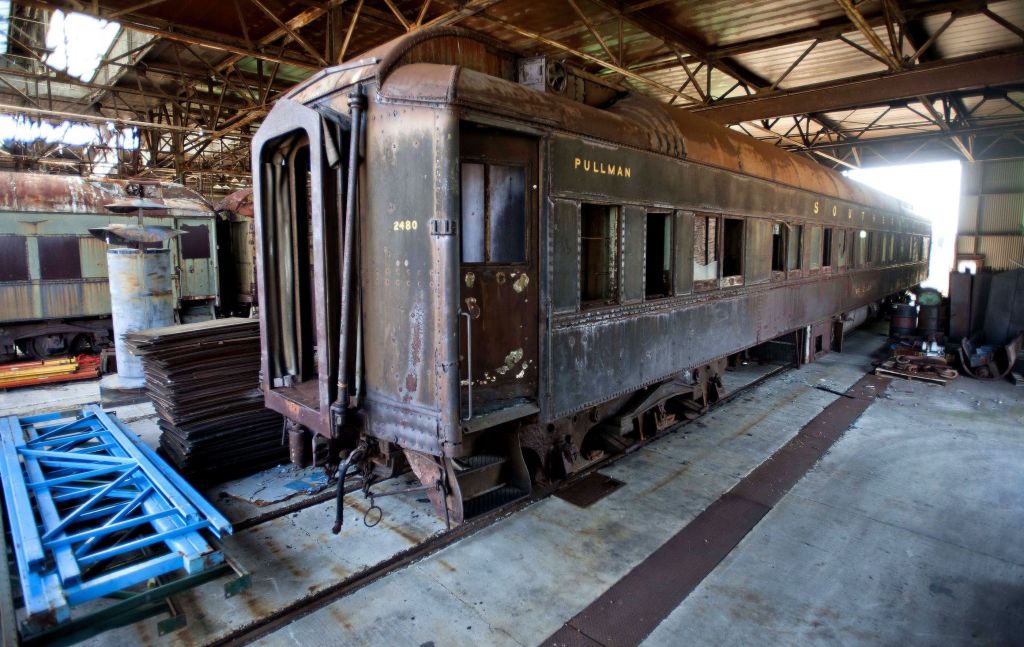 SPENCER — Located in the former Southern Railway Spencer Shops, originally built in 1896, one might think there would be a few places not normally seen by visitors to the N.C. Transportation Museum.
Dr. Kevin Cherry, deputy secretary at the N.C. Office of Archives and History and the museum’s interim director, thought so and opened a few extra doors for an interesting tour.
Southern Railway originally built the facility here because of its location near Salisbury, halfway between Washington, D.C., and Atlanta. Both mainlines, including a secondary western mainline, were serviceable from Spencer.
On what was once farmland, Southern built a giant facility to maintain its fleet of freight, passenger and switching locomotives. The largest building was the Back Shop, but significant also were the power house, paint shop, car repair shed, administrative building and various other structures.
The Back Shop currently is visited on occasion, but not open for normal tours. Two football fields long, 80 feet tall and 150 feet wide, the Back Shop was for many years the largest industrial building in North Carolina. The restoration of a DC-3 Piedmont Airlines plane is just one of several projects ongoing inside.
The back stairs are weak and steps are missing in spots, but the top of those stairs allows a view of the huge building that includes what were the supports of a mezzanine storage area. Looking down on the giant gantry crane makes one think of the time when up to 75 locomotives were serviced here in a single day.
There is also a small room that probably once was a break room. Showers were located nearby.
“Pranksters sometimes would pour water on an unsuspecting worker below, then quickly retreat before being caught,” Education Specialist LeAnne Johnson said,
The original car repair shed, now the paint shop, is only open to staff and volunteers. After conversion to a paint shop, vents were added. A Tweetsie combination car, built almost entirely of wood in 1917, and a Thomas trolley car are undergoing restoration inside.
“A combination car has areas for mail, baggage and passengers,” Bob Hopkins, exhibits coordinator, said. “The car wasn’t original to Tweetsie, but that is where we got it. The Thomas trolley car was being restored by Thomas employees until many of them recently lost their jobs.”
The original steam engine on site, the 1926 Baldwin 604, is split apart and undergoing a complete mechanical overhaul. Fire hose carts, horse carriages and many other items are stored in the paint shop.
Another area not open to visitors is the power house, which has most of its roof missing. In its heyday, the power house provided all the electricity for the Spencer Shops and the town of Spencer.
“Coal came in and fired the boilers,” Cherry said. “They kept adding on as the site grew and were in fact adding on more capacity when the shops were closed down. We plan to only keep one boiler and generator in here while taking out the others.”
Hopkins is proud of several of the pieces of rolling stock even though they are not currently being restored. One is the 1925 Southern McChesney sleeping car. It has a drawing room on one end and 12 sleeping berths. Hopkins loves the Edwardian-era look of the car, similar to famous elegant passenger ships of the era.
“It is like the Titanic without water,” he said. “It currently looks beyond repair, but our volunteers have taken care of much more than this.”
Also in the car shed area is a classroom and mini-theater car once used for safety training, which Hopkins hopes to eventually restore for school children to see on their visits. A steam derrick from the dawn of the 20th century also awaits attention.
Another area almost never seen is the underground storage tank room. After descending a metal circular staircase, near complete darkness surrounds the huge tanks used for storage of kerosene, various oils and other liquids. The dark and cold room leaves lots to imagination because there are currently no working lights.
The last building visited, again not on the normal tour, was the sand building.
“Sand was used in large amounts at the shops,” Johnson said. “Each engine had storage for sand that could be released and used for traction. Sand was also used for sandblasting of metal before the ongoing painting of the engines. Much of the sand came from the Yadkin River.”
The remaining foundation of the coal house, once 10 stories tall, is all that remains of the tallest structure on the 57-acre property.
The tank room, car repair shed and power house are off limits at all times to museum visitors. However, Johnson pointed out that many other behind-the-scenes locations are open during a tour that will next take place May 17. Cost is $25.
For more information, contact Johnson at the N.C. Transportation Museum at 704-639-1881, extension 258.