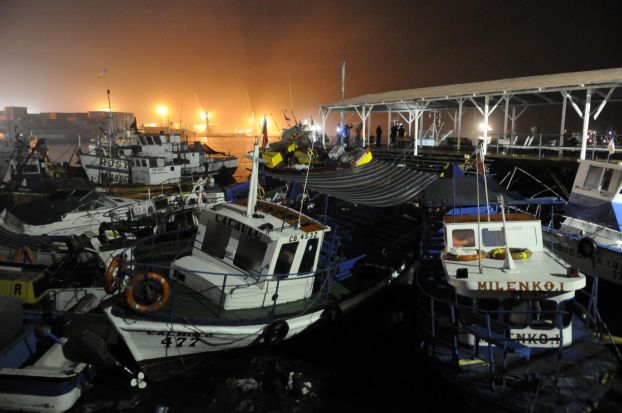 8.2 earthquake in Chile ‘not the big one’

SANTIAGO, Chile — Authorities in northern Chile discovered surprisingly light damage and just six reported deaths Wednesday from a magnitude-8.2 quake — a remarkably low toll for such a powerful shift in the Earth’s crust.
President Michelle Bachelet flew to the region to review damage in daylight after declaring a state of emergency and sending a military plane with 100 anti-riot police to join 300 soldiers who were deployed to prevent looting and round up escaped prisoners.
Thousands of people evacuated from low-lying areas were returning home after a spending a long night outside due to the threat of a tsunami. The government’s mandatory order to leave the coast was spread through cellphone text messages and Twitter, and reinforced by blaring sirens in neighborhoods where people regularly practice earthquake drills.
Seawater flooded city streets and washed away some fishing boats in Iquique, but by early Wednesday no major tsunami damage was apparent. Chile’s entire coast was initially subject to the mandatory evacuation order, which lasted nearly 10 hours in coastal communities closest to the offshore epicenter.
The shaking that began at 8:46 p.m. Tuesday also touched off landslides that blocked roads, knocked out power for thousands, damaged an airport and started fires that destroyed several businesses. Some homes made of adobe were destroyed in Arica, another city close to the quake’s offshore epicenter.
Mining in Chile, which is the world’s top copper producing nation, was not affected, although world prices for the red metal jumped as the quake raised supply concerns because most of the Chilean mining industry is in the northern regions.
About 300 inmates escaped from a women’s prison in the city of Iquique, forcing the closure of the border with Peru. Officials said some two dozen had been captured early Wednesday.
Bachelet, who just returned to the presidency three weeks ago, waited five hours after the quake struck to address her nation. It was not lost on many Chileans that the last time she presided over a major quake, days before the end of her 2006-10 term, her emergency preparedness office prematurely waved off a tsunami danger. Most of the 500 dead from that magnitude-8.8 tremor survived the shaking, only to be caught in killer waves in a disaster that destroyed 220,000 homes and washed away large parts of many coastal communities.
“The country has done a good job of confronting the emergency. I call on everyone to stay calm and follow the authorities’ instructions,” Bachelet tweeted after Tuesday night’s temblor.
She put her interior minister in direct charge of coordinating the emergency response, and announced that schools would be suspended in evacuated areas while authorities assessed the damage.
The only U.S. impact might be higher waves Wednesday for Hawaii’s swimmers and surfers, the Pacific Tsunami Warning Center in Hawaii said.
The U.S. Geological Survey said the temblor was centered in the Pacific Ocean 61 miles (99 kilometers) northwest from coastal Iquique. More than 20 significant aftershocks followed, including one of magnitude 6.2.
The quake was so strong that the shaking experienced in Bolivia’s capital about 290 miles (470 kilometers) away was the equivalent of a magnitude-4.5 tremor, authorities there said.
But Tuesday night’s quake was not the big one seismologists expect eventually.
“Could be tomorrow, could be in 50 years; we do not know when it’s going to occur. But the key point here is that this magnitude-8.2 is not the large earthquake that we were expecting for this area. We’re actually still expecting potentially an even larger earthquake,” said Mike Simons, a seismologist at the Geological Survey.
Chile is one of the world’s most earthquake-prone countries because just off the coast, the Nazca tectonic plate plunges beneath the South American plate, pushing the towering Andes cordillera to ever-higher altitudes. Nowhere along this fault is the pressure greater than in far northern Chile, an area known as the “Iquique seismic gap”.
The USGS says the seismic gap last saw a major quake in 1877, when a magnitude-8.8 quake unleashed a tsunami that caused major damage along the Chile-Peru coast and fatalities as far away as Hawaii and Japan. Another quake of similar force hit just north of the area in 1868.
“This is the one remaining gap that hasn’t had an earthquake in the last 140 years,” said Simons. “We know these two plates come together at about 6, 7 centimeters a year, and if you multiply that by 140 years then the plates should have moved about 11 meters along the fault, and you can make an estimate of the size of earthquake we expect here.”
The latest activity began with a strong magnitude-6.7 quake on March 16 that caused more than 100,000 people to briefly evacuate low-lying areas. Hundreds of smaller quakes followed in the weeks since, keeping people on edge.
———
Associated Press writers Eva Vergara in Santiago, Michael Warren in Buenos Aires, Argentina and Frank Bajak in Lima, Peru, contributed to this report.

NEW YORK (AP) — Encouraging signs of a pickup in manufacturing helped send the stock market higher. It was the... read more