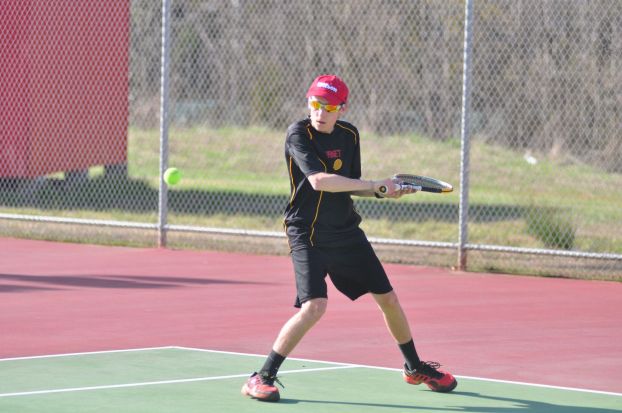 SALISBURY — With or without its No. 1 player, the Salisbury boys tennis team evolves.
The Hornets (11-0) didn’t have junior phenom Michael Ogden or No. 4 player Abraham Post Monday against Lexington, but they still cruised to a 9-0 win to stay perfect on the year. SHS is ranked second in the state by mytennisleague.com and have dropped just four individual matches all year. SHS is between No. 3 Brevard and top-ranked Carrboro.
“We only have one goal really,” Salisbury senior Clint Comadoll said. “That’s to win states.”
Comadoll, who already helped win a soccer championship this year, filled in at No. 1, beating Lexington’s Austin Cross 6-1, 6-2.
“I started this year pretty good and I got in a slump where I struggled recently,” Comadoll said. “Today I played decent.”
Ogden was in California of all places visiting Stanford on a recruiting visit and Post was with the SHS golf team. Ogden is rated as a 4-star recruit on the Tennis Recruiting Network
“I’ve learned a lot from the kids,” Salisbury coach Milton Griffith in his first year. “They’re dedicated. They hustle and really deserve any accolades they get.”
Griffith played tennis at North Rowan in the 80s and worked at Winston-Salem State for a while before jumping in at SHS this year to replace former coach Chris Stroupe.
Spencer Storey filled in at No. 2 singles and topped David Wolfe 6-0, 6-2.
“It’s been a blast,” Storey said of this season. “Working with these guys and having them come out and hit with me has made me a lot better.”
Chris Derrick beat Jack Davis 6-0, 6-0 and David Derrick prevailed against Coleman Hayes 6-0, 6-0. No. 5 Hunter Carlton beat Dave Fulp 6-0, 6-1.
At No. 6, Alex Julian beat Patrick DeZego in a three-set tiebreaker 6-2, 5-7, 10-6.
Comadoll/Storey, Chris Derrick/David Derrick and Carlton and Mathias DeCormarmond earned doubles victories.
SHS plays at CCC foe Thomasville Wednesday and at Carson Thursday.