Cookin’ it up at the Country Club of Salisbury 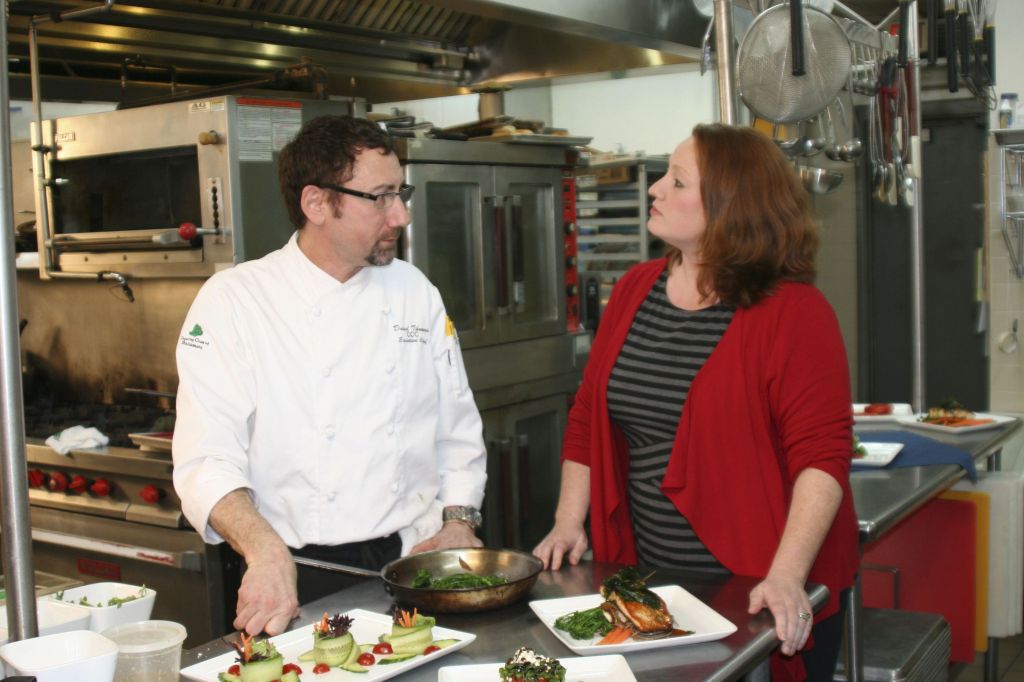 About a month ago, I ran into Antwaun Thompson, the club’s general manager, and we decided that it would be so much fun to crash the Club’s kitchen. Antwaun made the formal introductions for me and I met Chef David Thomas, the club’s executive chef.

Executive Chef Thomas is a certified chef through the American Culinary Federation. He has over 20 years of experience and has a passion for creating Southern-inspired fare with edgy appeal.

Chef David and his cuisine have been featured in local, regional and national magazines as well as television broadcasts and culinary demonstrations. He has received an EVIE award from the International Special Event Society for Best Plated Food Presentation, is a two-time winner in The Great Chefs of Charlotte Cook-off and was featured as a celebrity chef at Charlotte Shout, one of the city’s most significant culinary events.

Chef David is a kind, mild-mannered gentleman who is one heck of a chef. I did not know what to expect when I arrived in his kitchen. But the minute I showed up, and the video camera turned on, Chef David shined. He was in his element, and there was no stopping him!

Chef David had two dishes that we were going to prepare: Grilled Watermelon Spinach Arugula Salad with Chevre and Seared Salmon with Soba Noodles and an Oriental ginger sauce.

I learned pretty quickly that Chef David had a flare for the dramatic when he told me we were making grilled watermelon. If you have not tasted this culinary delight, please cook this tonight. You will not be disappointed.

Chef David made a balsamic reduction taking 1 cup of balsamic vinegar in a small sauce pan and reducing it to a thick syrup consistency over medium heat.

In a food processor, we made a tasty Vidalia dressing. We added one cut-up Vidalia onion, 1 cup of sugar, 1 Tbsp. Dijon mustard, 2 ounces of apple cider, and a little Kosher salt and pepper to taste. We turned the processor on, and lightly drizzled about a cup of olive oil to emulsify.

In a bowl, we added 2 cups of spinach and 1 cup of arugula, and folded in the Vidalia dressing to coat the greens. We then were ready to assemble.

Chef David placed one piece watermelon on plate followed by a 1 cup of greens, a couple of ounces of goat cheese (Chevre) and repeated with watermelon, greens and goat cheese. He drizzled the entire plate with olive oil, the balsamic reduction and cracked black pepper. Not only was it beautiful, but it was scrumptious!

We moved on to making a wonderful, Asian-fusion dish of pan seared salmon, soba noodles, baby carrots, shiitakes, and broccoli with a ginger scallion sauce. Sounds fancy? It was easy, beautiful, and so delicious.

First, we made the Oriental ginger sauce. We seared garlic in sesame oil, then added soy sauce, chicken stock, rice wine vinegar, ginger, brown sugar and crushed red pepper and brought it to a boil. We made a mixture of cornstarch and water, added it to the other ingredients, then set it to simmer.

We then cooked up some Soba noodles according to the package directions and quickly steamed some carrots, shiitake mushrooms and broccolini.

Then, in a medium skillet, we cooked salmon fillets with salt, pepper and a dash of dry ginger in a little bit of oil. Chef David suggests cooking the salmon for about 4 minutes on each side until it is just opaque in the center.

Chef David then had me help with plating everything. First, a handful of Soba noodles, salmon of top of that, and vegetables decorating around the edges. We drizzled the plate with the Oriental ginger sauce.

Not only did these two dishes look magnificent, but they tasted even better! Chef David’s cuisine truly has a flare for the dramatic. It is beautiful, interesting and tastes like heaven.

Cut onions into quarters; place in processor or use hand held robot coupe without the oil. While machine is running, drizzle oil to emulsify. Re-Season if needed. Set aside for later.

Pour 1 cup of balsamic into small sauce pan and reduce to a thick syrup consistency over medium heat.

Place watermelon on cutting board. Snip off the two ends and cut in half. Slice the watermelon by removing rind. Cut 3-by-3 pieces into 1 inch thickness. Spray watermelon with a little pan spray and drizzle with olive oil. Place watermelon on a preheated grill or you can use a grill type pan over a stove top to get the grill appearance.

Grilled Watermelon Assembly: Put enough dressing on the greens to coat. Place one piece watermelon on plate followed by a 1 cup of greens, couple of ounces of goat cheese and repeat with watermelon, greens and goat cheese. Drizzle with olive oil and balsamic reduction and cracked black pepper.

and a dash of dry ginger.

Put a handful of noodles on plate. Put a salmon filet on top. Decorate with vegetables. Drizzle glaze over salmon and sprinkle with scallion for garnish once you plate it up.