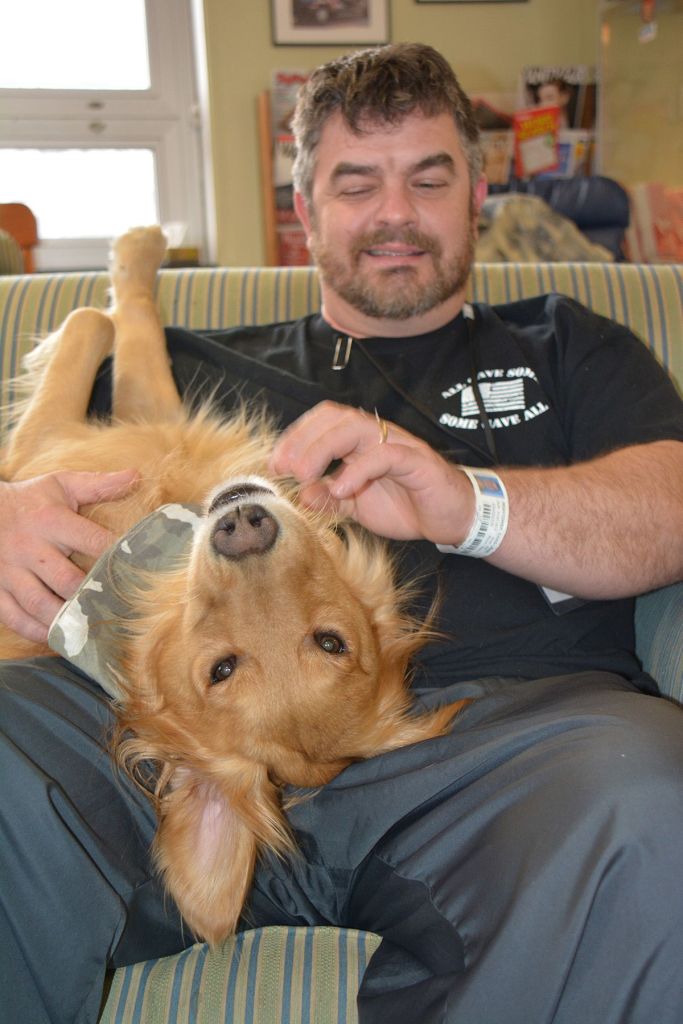 SALISBURY — During the six weeks patients in the Specialized Inpatient Post-Traumatic Stress Disorder Unit (SIPU) spend at the W.G. (Bill) Hefner VA Medical Center as a cohort (group), learning to cope with PTSD, they sometimes develop long-lasting bonds with one another. The most recent group was no exception, but some in the group also developed a special relationship with Kimberly, the service dog that works in the SIPU.
To commemorate their graduation, and the work Kimberly does, Group 135 donated a special gift to the hospital and Kimberly — a dog house decorated with a military theme.
Travis Robinson, a member of SIPU Group 135, said they decided to do something special for Kimberly for several reasons.
“Everyone generally makes a commemorative plaque to the staff for us to be remembered by. Mr. (Chad) Hightower and I both thought we needed to think outside of the box, after seeing these plaques — 134 of them,” he said. “My mind was already on the dog when we started coming up with ideas. I didn’t really see anything around that gave her credit. I thought we should get her a dog house and make it a commemorative dog house.”
Chad Hightower, another member of SIPU Group 135, said he was glad his group could give back something special, to someone who was very special to him.
“I started having some issues about 10 months into my last deployment, and so I went down to the combat stress section at the Forward Operating Base. You could check out a service dog there for the day. So I would go down and check out the dog every day other soldiers didn’t have her,” he said. “We spent a couple of nights in the bunkers — we went through some torment together, and I made a connection with that service dog in Iraq.”
“When I came here, I connected with Kimberly. I don’t know what it is about dogs, but to me they have a tendency to see the ones who are really wounded or really hurt,” added Hightower. “There’s no prejudice, there’s no judgments, it’s just pure healing. I don’t think she gets enough credit — she never calls in sick, she never complains — all she wants is a little bit of attention.”
Robinson said he’s witnessed firsthand how the service dog takes care of those in need of a friend.
“I believe that dog knows her job and she knows who to go up to, who needs her the most. She’s come up and put her head on my lap a few times when I wasn’t feeling quite right,” he said.
The group decided to decorate Kimberly’s new house with camouflage netting, with some being jungle camo to represent Vietnam era veterans and desert camo to represent eras of the Gulf Wars, OIF and OEF. They also hung dog tags with the names of everyone in Group 135 on the house.
“We really just wanted to recognize Kimberly’s significance here, and what she does for so many,” said Robinson.
For more information about the Salisbury VA Medical Center, visit http://www.salisbury.va.gov/.