Ready to make his mark 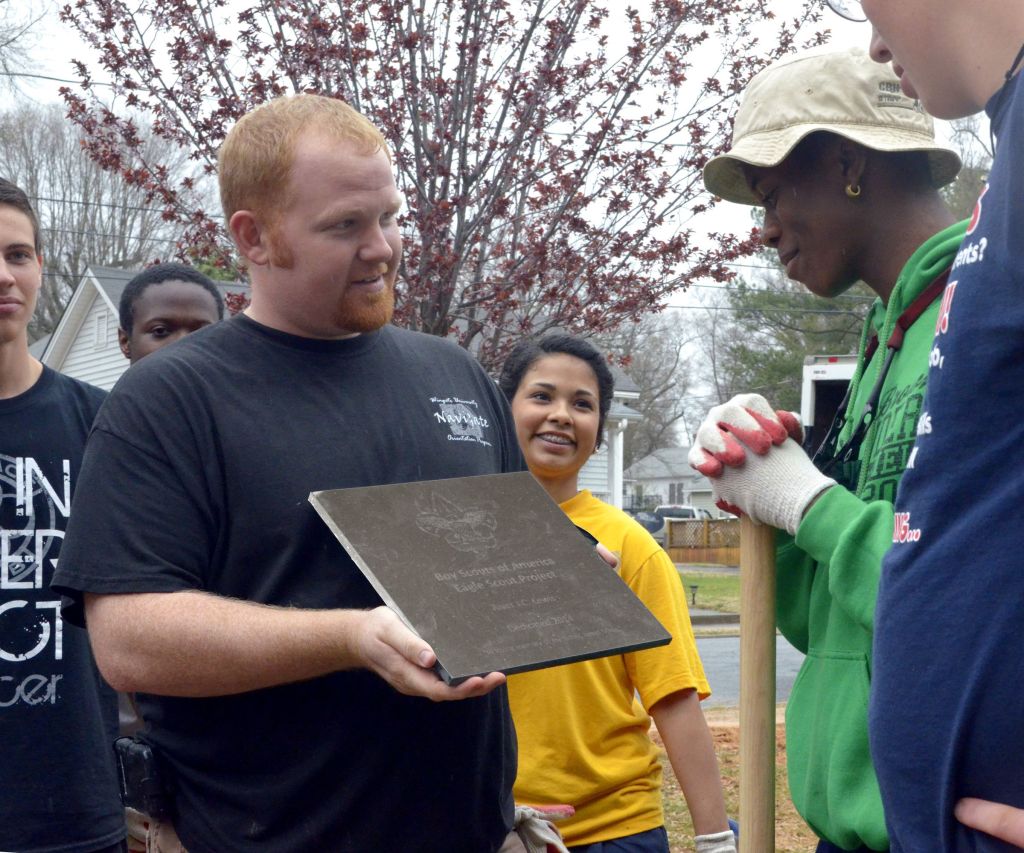 During his high school career, Lewis said, he’s been a student-athlete, a Boy Scout, a member of the band and an active member of the Interact Club.

Friday, after a full day of school, Lewis and some 20 volunteers were out in the rain and mud, working on his Eagle Scout project for Troop 373: planting shrubs and installing new landscaping at the A.L. Brown High School STEM Academy building.

But there was a time, Lewis said, not that long ago, that he wasn’t sure of success.

There was a time, in fact, when he acted out and didn’t do his best.

“Whenever I was a freshman, I used to be into foolishness. I used to hang around with the wrong people,” Lewis said.

As a young man, he kept switching schools — public and private — trying to find a school where he could thrive.

“I had my own permanent seat in the principal’s office,” Lewis said.

His father, the late Jamel Mims, died of cancer when Lewis was 3. He grew up without a father-figure for most of his life.

But, Lewis said, he doesn’t use that as an excuse.

He credits the mentors he’s found in the Kannapolis City Schools with his turnaround, and the success of his high-school career.

“They showed me I didn’t want to be a random bum walking the loop for the rest of my life,” Lewis said.

Lewis, who turned 18 Saturday, was born in Manhattan.

His mother, Mercedes Harrington, worked in publicity in the music industry. River, the fourth of six children, was born at home.

Harrington said River’s father was a sweet man, a kind man who brought her flowers every week.

But things began to change quickly. “All of a sudden,” Harrington said, “the bottom fell out of hip-hop.”

A change in musical styles toward gangster rap caused changes in the music industry, Harrington said, and led to the loss of her job.

She came back to North Carolina to find work. When Jemel, River’s father, died of cancer, Harrington said she did everything she could to make ends meet.

Harrington said she went from having worked publicity for George Clinton, James Brown and other acts, to doing laundry and working as an interim activities director at a nursing home.

“I cried many nights,” Harrington said.

As Lewis got older, Harrington said her mission was to get him involved in as many activities as possible — to surround him with role models.

The reason, she said, is that, “in every state in America, prisons are oozing with young men of color.”

She didn’t want her own son to become a statistic. “You have to do something about that,” Harrington said.

Lewis remembers being young, and going to P.R. events with his mother.

As a boy, he said, he was very outgoing and loved meeting people — a quality Lewis said he finds valuable today.

“Social networking, social media, that’s my means of communication,” Lewis said. “… It’s all about networking. You find people, you meet different people. It’s not just about what you know, it’s about who you know.”

From the time River was young, his mother said, she felt he was destined for greatness.

But there were still challenges along the way.

Without going into a lot of details, Lewis said he was definitely in danger of going the wrong way.

During his first six years of school, he had academic and disciplinary problems, Lewis said.

“I don’t like to dwell on that,” Lewis said.

Teachers became his role models, and led him to the turning point in his life, Lewis said.

After years of making low grades, it was after the family moved to Kannapolis and Lewis started at Kannapolis Middle School that he said he realized the changes that needed to be made.

For one thing, Lewis said, he started to notice the impact his peers were having on his life.

“You don’t want to spend time with friends who suck your life away,” Lewis said.

As he got older, Lewis said he had to adjust his attitude as well.

Sometimes, Farmer said, it wasn’t easy to tell whether Lewis was serious about schoolwork, since he loved to speak up in class.

“We absolutely couldn’t stand each other!” Lewis said, grinning, when asked about starting out in Farmer’s class.

That changed when Farmer took time to get to know Lewis. “You see how far he’s made it, how many things he’s accomplished,” Farmer said.

“I felt that he would always get on me,” Lewis said, “but then I realized that he saw potential in me, and he didn’t want me playing around in class.”

This year, Lewis joined the Interact Club, of which Farmer is the faculty advisor. “He’s a hard worker,” Farmer said.

There are others who have played a role in his life, but it all comes back around to the dream his mother had for him, Lewis said.

Harrington “is an absolute warrior to me,” Lewis said. “She is the main reason I want to do better in life.”

His idea to gather volunteers and donors to install landscaping outside the new STEM Academy building at the high school needed her approval.

One quote in particular stood out in Lewis’ proposal, Cain said.

“He wrote, ‘I want to taste success as much as I want the air I breathe,’” Cain said. “When I saw that in his proposal, when I read those lines, I knew we were going to do all we could for him.”

Cain was among the volunteers Friday, working in the mud to make Lewis’ plan a reality.

Farmer was also there, along with Interact Club members and two of Lewis’ sisters.

As the afternoon went on, they took a break from their work.

Farmer and Cain gathered everyone around, and Farmer presented a plaque commemorating Lewis’ Eagle project, and dedicating it to the memory of Lewis’ father.

“I don’t know what to say,” Lewis told the group, his voice full of emotion. “My father would be really proud.”

A little later, Lewis said his mother had always spoken highly of his father.

“The way she talked about him, she made me want to be like him,” Lewis said.

That’s why Lewis said he wanted to become a mentor.

That process started at home, Lewis said, with his siblings.

“You got to grow up fast in a house of six children,” Lewis said.

Francescia Harrington, 11, said her brother “helps me with school and with other things … He’s caring and helpful,” she said.

On Tuesdays and Thursdays, Lewis starts his days early, working with the school system’s mentoring program at the intermediate school and middle school.

“I get out of that, go to school, go through a whole day of school,” Lewis said.

“He ultimately had to give up band, because he was doing too much,” Mercedes Harrington said.

As he entered high school, his mother said she encouraged Lewis to take “every opportunity that he could reach, to stay busy, and it’s paid off.”

In February, Lewis learned he had been accepted to his first choice of college, Morehouse University in Atlanta.

The historically black university is the alma mater of Martin Luther King, Jr., and Harrington said it made her proud to know her son would attend there.

“Whatever (Lewis) says he wants to get, he will have, because he will speak it into existence,” Harrington said.

River Lewis, meanwhile, plans to study communication. He wants to follow in his mother’s footsteps.

It won’t be an easy transition, Lewis said, but he’s excited about his future.

He’s ready to take the next step, and carry on the good example that he said educators in Kannapolis, and members of his family, have given him.