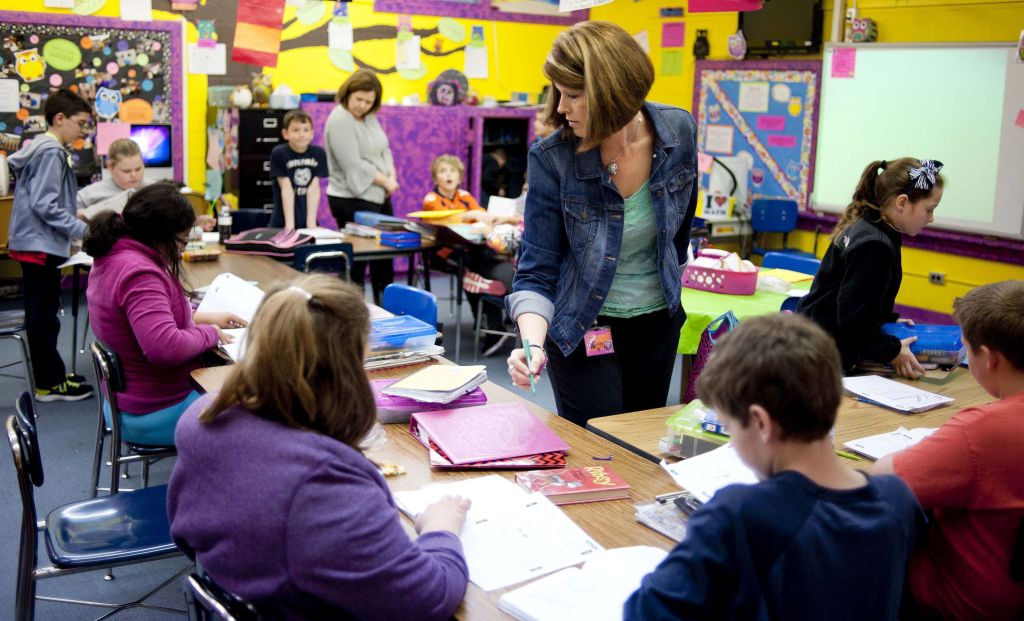 When you step into Tonya Kepley’s fourth-grade classroom at Enochville Elementary, you know you’ve entered a truly special and unique learning environment.

As Kepley likes to say, things are “movin’ and groovin’ ” in her classroom.

After spending a few minutes in her classroom, there’s no question why she won the highest honor for math and science teachers in the nation – the Presidential Award for Excellence in Mathematics and Science Teaching.

Kepley’s walls are painted a vibrant yellow and are covered with posters, students’ artwork and projects. Bright pinks, blues and purples serve as accent colors and Kepley has an owl theme integrated into the room as well, which is fitting, since Enochville’s mascot is the owl.

Students can often be found working in pairs or groups around the room — at tables, desks and even on the floor. They use iPads, pegboards and worksheets to discover new mathematic principals.

Although the scene might look like chaos at first glance, it’s controlled chaos. Kepley easily takes control of her class, with one of her signature quips such as “I need your eyes and ears,” or “Help a girl out.”

Kepley uses questions as a teaching tool and to make her students think for themselves.

In a lesson about symmetry, Kepley told her students, “Don’t ask me a question. Answer the question, ‘This is symmetrical because — ?’”

She also uses visual demonstrations, such as folding a piece of computer paper to show symmetry in a rectangle, or using her arms to illustrate angles.

Winning the presidential award was quite a process. Kepley originally found out about the award at the N.C. Council of Teachers and Mathematics Conference in 2011.

Through a grant, each Rowan-Salisbury school was able to send one teacher to the conference, and Kepley was selected to represent Enochville Elementary School.

Kepley said one of the first things they talked about at the conference was the presidential award. There was also an in-depth session later in the day about how to apply for it.

Kepley circled the session as a possibility to attend, but ultimately decided to go to a session about problem solving, because she wanted to go to something that would benefit her students.

After waiting 15 minutes for the speaker to show up for the problem solving session, though, Kepley decided to look through her informational packet to see what other sessions she could go to.

The only other session she had circled for that timeframe was the one about the award, so Kepley decided to go, arriving 15 minutes into the presentation.

In the session, she learned that the National Science Foundation administers the award on behalf of the White House. Teachers must be nominated and each submission packet includes a 15-page paper, a 45-minute video and letters of recommendation.

When she left, Kepley asked her husband, a fellow teacher and her principal if she should apply.

They all encouraged her to do it.

She remembers them saying, “You’ll never know if you don’t try.”

Kepley prayed about it, and decided to go for it.

Barry Haywood, Enochville’s principal at the time, nominated her, and Kepley began working on her submission packet.

She said that working on her submission packet taught her perseverance and caused her to cling to her faith even stronger than before.

Kepley said it was especially difficult to work on the paper over spring break, since she really just wanted to be outside with her daughters, but, she said, “If you start something, you finish it.”

The video portion of the packet involved her teaching a project-based science, technology, engineering and math, or STEM, lesson in her actual classroom with her actual students.

The students had to use area and perimeter to design a recreational park. Kepley wrote her students letters from “the mayor” with directions for the park, then they designed it.

Kepley said they had to film the video three times before she was able to use it.

The following month, she found out she was one of six finalists from North Carolina, three of whom taught math. The other three were science teachers.

Kepley said that four people go over each applicant’s video and provide them with feedback on their teaching methods.

In October, she was invited to speak about her experience so far at the very conference she heard about the award.

Along with the other state finalists, Kepley was asked to present her philosophy on math in Raleigh and was recognized at a state school board meeting.

After a year and one month, Kepley had resigned herself to the fact that she hadn’t won, but on July 9, 2013, which happens to be Kepley’s anniversary, she checked her email to find an FBI background check.

That’s when she knew she won.

Kepley knew all the winners had to undergo an FBI background check in order to attend the event, parts of which took place on White House property.

Even though Kepley was fairly positive she won, it wasn’t until December until she knew for sure.

The official announcement was made Dec. 20, the day she got off for Christmas break.

“I was sitting on the couch at Mamma’s opening Christmas presents,” Kepley said.

“I was shocked and literally shaking all over,” she added.

The trip, which began on Kepley’s birthday, included a banquet, professional development sessions and a visit to National Geographic. The honorees also had the opportunity to meet President Barack Obama and shake his hand.

“He talked to us like we were humans,” Kepley said, adding that they each got to shake his hand.

On the final day, there was an awards ceremony for all the honorees at the National Academy of Sciences, where each teacher received a certificate signed by President Obama.

“My students are the true winners of this prestigious award,” Kepley said. “Their math talk, interactions, performance and achievements are to be applauded. I was simply the facilitator scaffolding them to their mathematical successes.”

She is married to her high school sweetheart, Billie Kepley, III, and they have two daughters, Kadence, 6, and Kyrsten, 9.