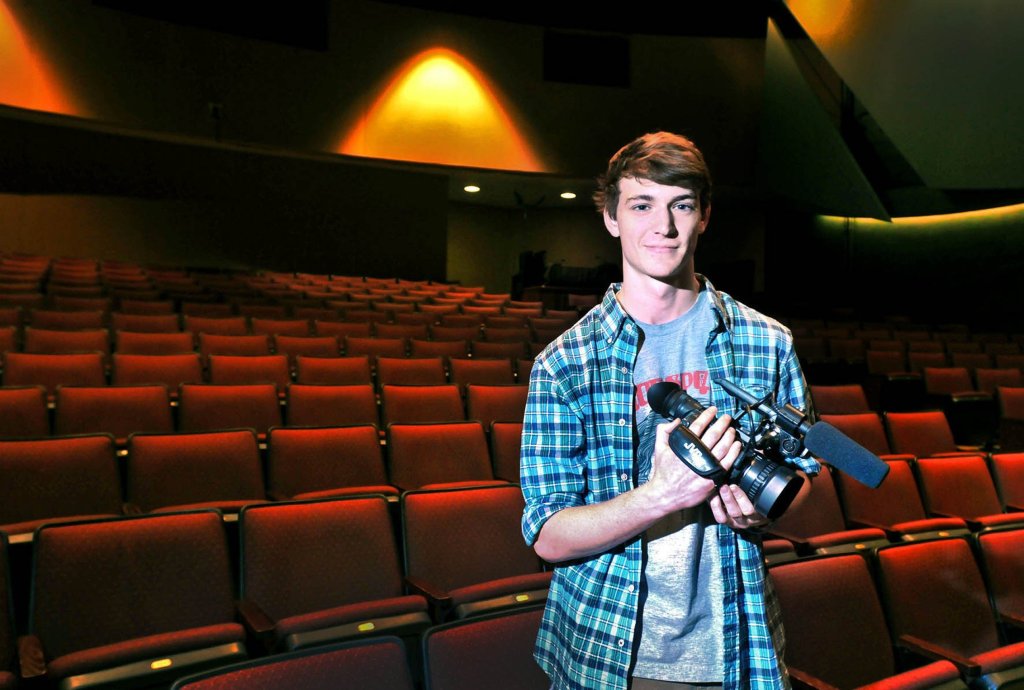 CHARLOTTE (AP) — For the first time, Charlotte will have its own film festival for high school students in May.
A lot of prep goes into putting one on: finding a venue, judges and, most importantly, young filmmakers.
Behind it all is Jacob Wishnek, a junior at Charlotte Country Day School. He came up with the idea for the Charlotte Student Film Festival in August after attending a five-week film camp at UNC School of the Arts.
His inspiration for a Charlotte festival was twofold: He loved the festival at the end of camp showing participants’ work, and he has enjoyed competing in Country Day’s student festival, FilmFest. The two events got Jacob thinking about filmmaker friends who don’t have a chance to share their work, beyond posting it on YouTube.
“It can get lost in the fray of cat videos and the Harlem Shake,” Jacob, 17, said. “The film festival puts it on stage and gives them a venue to express themselves.”
The festival will be 7 p.m. May 9 at Country Day’s theater, and entries must be submitted by April 25. Jacob will choose the top 10 entries to show at the festival.
There aren’t many festival restrictions, but Jacob asks that filmmakers keep projects, at a maximum, PG-13. “No one shows up and expects to see gunslinging and ‘Pulp Fiction’ kind of stuff.” Also, films can’t exceed 7 minutes.
The winner gets to have lunch with Bert Hesse, chief executive of Studio Charlotte, and with other film executives. Hesse will be one of the festival’s three judges.
Hesse said he’s looking forward to seeing what young local filmmakers can do, and talking to them about their projects. He plans “to pick their brains and give them positive, constructive … input, and encourage them to keep working at it.
“Someone is going to be making blockbuster movies in the future. Why not them?”
Kim Brattain, owner of Phase2Productions and former news anchor for WSOC-TV, will also serve as a judge, and said she loves seeing young folks like Jacob excited about filmmaking.
“I hope he’ll work with me one day! Heck, I might be asking him for a job,” Brattain wrote in an email.
In addition to finding judges (the third is a Country Day drama teacher) and a venue (the school’s theater seats 350), Jacob had to spread the word about the festival. He’s been using social media, such as Facebook, and also has emailed and met with some area drama teachers.
Jacob recently finished performing as Jesus in the school’s spring musical, “Godspell.” Out of the spotlight, he also enjoys directing, writing and being a cinematographer. His collection of 5-second sketches, “Really Short Films,” won at last year’s FilmFest.
In the past few years, Jacob’s classmates produced homemade “Hunger Games” videos that gained an international following on YouTube (and the four students were featured in Young Achievers). They had been in charge of the school’s film club but graduated last year. Now, Jacob is president.
“He had some big shoes to fill with the ‘Hunger Games’ crew, and he’s been filling them well,” said Erin Springfield, the film club’s adviser. “It’s become a much more productive club under Jacob’s leadership.”
About 15 active members meet regularly to discuss techniques and help each other with projects. “We’ve been gushing about ‘Gravity’ for the longest time,” Jacob said.
He loves so many aspects of art, music, film and theater that he has a hard time picking what he enjoys best. “I want to be a modern-day Renaissance man: act, write, direct, do cinematography. I want to be doing everything.”
Jacob wants to end up in the Northeast, maybe Boston, and his dream school is Columbia University in New York City. But: “I don’t like being a struggling artist.” He thinks he’ll major in business or entrepreneurship and minor in film, wherever he ends up going to school.
Still, his ultimate job would be writing for “Saturday Night Live.”
“I’ve always wanted to perform,” he said. “And I like writing funny concepts. I like writing sketches and comedies.”
For now, he hopes to receive a lot of festival submissions, and that students and film fans attend the free event to support the area’s young filmmakers.
Springfield said she’s proud of the initiative he’s taken, and Jacob said he hopes the festival becomes an annual event long after he graduates: “I’d like to leave behind something that’s lasting.”