Australian PM vows search for jetliner will go on 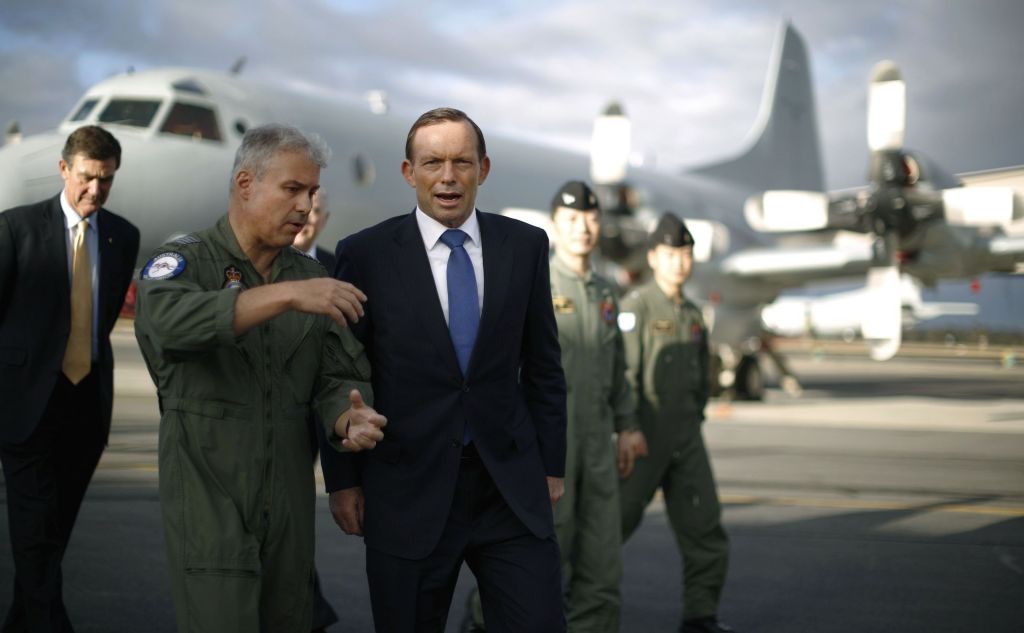 PERTH, Australia (AP) — The weekslong search for Malaysia Airlines Flight 370 is “an extraordinarily difficult exercise” but it will go on as long as possible, Australia’s prime minister said Monday.
Tony Abbott told reporters in Perth, the base for the search, that although no debris has been found in the southern Indian Ocean that can be linked to the plane, searchers are “well, well short” of any point where they would scale the hunt back.
The Boeing 777 disappeared March 8 while flying from Kuala Lumpur to Beijing with 239 people aboard, and after experts shifted through radar and satellite data, they gradually moved the hunt from seas off of Vietnam, to areas west of Malaysia and Indonesia, and then to several areas west of Australia.
“This is an extraordinarily difficult exercise …. we are searching a vast area of ocean and we are working on quite limited information,” Abbott said, adding that the best brains in the world and all the technological mastery is being applied to the task.
“If this mystery is solvable, we will solve it,” he said.
He said the search that has been going on for more than three weeks is operating on guestimates “until we locate some actual wreckage from the aircraft and then do the regression analysis that might tell us where the aircraft went into the ocean.”
The first planes from today’s hunt were over the search area about 1,150 miles west of Australia. The Australian Maritime Safety Authority said 10 planes and 10 ships — with more than 100 personnel in the air and 1,000 sailors at sea — will take part, with some sections of the zone expected to experience low clouds and rain.
The aircraft and ships are scouring a search zone that was redefined based on satellite data from the Boeing 777, although after several days no debris has been found that can be associated with the flight, officials say. Only “fishing equipment and other flotsam” have been spotted.
Abbott said he was not putting a time limit on the search. “We owe it to everyone to do whatever we reasonably can and we can keep searching for quite some time to come … and, as I said, the intensity of our search and the magnitude of operations is increasing, not decreasing.”
In Kuala Lumpur, several dozen angry Chinese relatives of Flight 370 passengers visited a temple Monday to pray for their loved ones. They flew to Malaysia on Sunday and staged a protest to demand “evidence, truth, dignity” from Malaysian authorities.
The planes taking part in Monday’s search include P-3 Orions from Australia, New Zealand, Japan and South Korea, plus a Japanese coast guard Gulfstream jet, a Chinese Il-76, a U.S. Navy P-8 Poseidon, two Malaysian C-130 Hercules and one civil jet acting as a communications relay.
It takes planes about 2 1/2 hours to get to the area, allowing a five-hour search before they must return.
———
Wong reported from Kuala Lumpur. Associated Press writers Scott McDonald and Eileen Ng in Kuala Lumpur; Malaysia; Kristen Gelineau in Sydney; and Rod McGuirk in Canberra, Australia, contributed to this report.