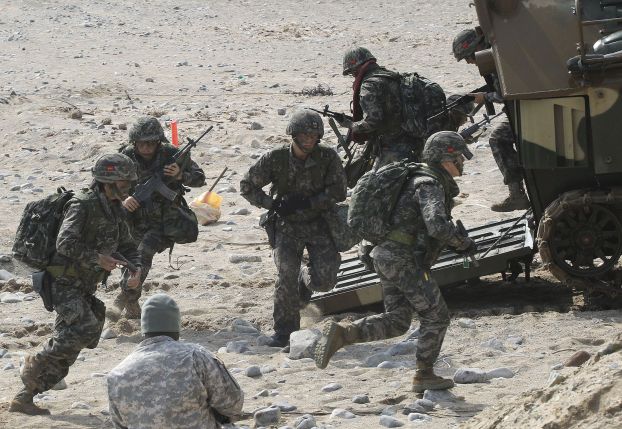 Your daily look at late-breaking news, upcoming events and the stories that will be talked about today:
1. U.S., RUSSIA STILL AT ODDS OVER UKRAINE

While both sides favor a diplomatic solution to the crisis, they were unable to bridge the gap between them at a meeting of their top diplomats in Paris.

Residents of five South Korean islands were evacuated to shelters as artillery shells were fired across a disputed sea boundary between the two foes.

Tangled fish lines and other trash floating on the surface of the Indian Ocean create false alarms in the global effort to find the Malaysian jetliner.

Gerrymandering following the 2010 census means Republican voters are spread among more districts in many states.

Searchers hope to make headway in their efforts as rains ease this week.

To mark the first anniversary of the twin bombings, Boston’s public library is putting up an exhibition of items such as runner shoes, teddy bears and signs that were left by mourners.

Sources tell AP that the widely anticipated study found that harsh interrogation techniques of terror suspects did not aid in killing the al-Qaida leader.

8. WHAT A FAIR MINIMUM WAGE MEANS

The hot election year issue divides economists and politicians even though its buying power has declined since 1968.

9. WHERE EGYPTIAN DOG AND CAT MUMMIES ARE TAKING CENTER STAGE

Dozens of centuries-old specimens are on display at a California museum, including a canine so well detailed that even its floppy ears are prominent.

10. WHO EARNED A SPOT IN THE FINAL FOUR

UConn will play Florida, the NCAA tournament’s overall No. 1 seed, while Kentucky faces off against Wisconsin.

SALISBURY — You might see the new dugouts going up on the girls softball field at Salisbury High and think... read more