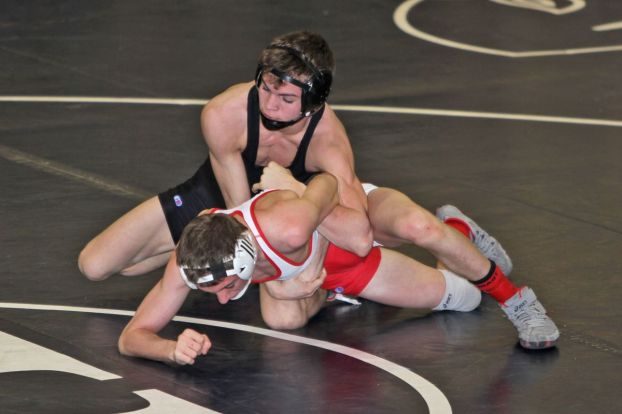 LANDIS — South Rowan junior Logan Durham headed to downtown China Grove for some sushi on Saturday afternoon, evidence of at least a brief break from his Spartan lifestyle.
“My dad was grilling out the other day and he cooked up a whole bunch of boiled eggs,” Durham said. “My mom asked him why all the eggs, and he said it was because Logan would eat them. She told him, ‘I think Logan’s done with eggs for a while’ — and she was right.”
Grilled chicken and boiled eggs allowed the muscular Durham to stay eligible at 106 pounds this season — the lightest weight class —and he made it pay off with a 3A state championship. He overpowered opponents and went 31-0.
“Oh, it was all definitely worth it,” Durham said. “Every bit of it. But definitely no more eggs.”
While a state title is a pinnacle for any wrestler, Durham’s season got even better when he received the Dutch Meyer Award as Rowan County’s Wrestler of the Year at South’s winter awards banquet.
“That’s a great honor,” Durham said. “We’ve got so many great wrestlers in the county. Alex Lyles (Carson), Wyatt Blume (East) and Shiheem Saunders (East) all were all right there in the state finals, so this award means a lot. It feels really good because I didn’t make weight for the county tournament, but I came back to be the county wrestler of the year.”
Durham broke a decade-long drought for South as far as the award given in memory of Meyer, a legendary Catawba coach.
Matt Maris, who now teaches and coaches at Red Lion High in Pennsylvania, was the last Raider to win in 2004. Wayne Freeman, who guided Maris, now coaches Durham.
As far as state championships, Durham is the first South wrestler to win gold since Eric Bopp claimed the 135-pound 4A title in 1991.
“The cool thing was that Coach (Jim) Christy, who coached Bopp, was there at the banquet to present the Meyer Award,” Durham said. “He said if I thought there was a lot of pressure winning a state championship, just wait until I tried to win the second one. And I know he’s right. When you’re a state champion, there’s a really big target on your back.”
It will be the Super Bowl for everyone Durham wrestles next season, and he understands that.
“It just means I’ll have to work even harder,” Durham said. “Not a problem.”
Durham’s days at 106 are over. He’ll wrestle in a higher weight class next season, which is the norm for wrestlers as they mature.
When Durham wrestled Weddington’s Parker Walton in the 3A Midwest Regional final, Walton also was unbeaten. Durham stopped him and then beat Walton again 3-0 for the state title.
“I was concerned wrestling him again because he knew me and he’d studied film on me,” Durham said. “But I was able to get a takedown, and that was it. I was ready to brawl, but that match was almost boring.”
Almost.
For the 26 family members who were in Greensboro supporting Durham, it was pretty darn exciting.
Durham’s senior year should bring more medals.
“I expect good things out of Logan as he continues his career,” Freeman said. “He has a chance to be the first two-time champ in the history of South Rowan.”
But please, no more eggs.

The scouting report on Catawba center fielder Blake Houston always has been that he’s more likely to hit an inside-the-park... read more