Rock Your Socks at Knox 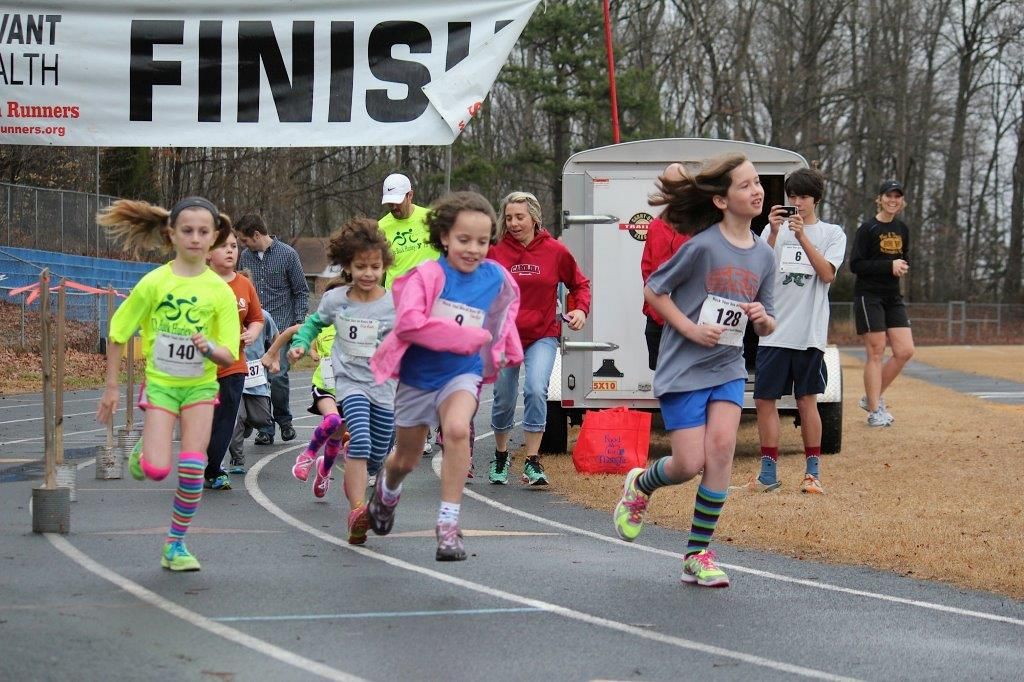 With threatening skies and a dour forecast, 150 runners gathered Saturday for the inaugural Novant Health Rock Your Socks 5K and fun run to benefit Knox Middle School.
Occasional mist and light drizzle kept participants guessing on what to wear, even with temperatures in the 50s.
A thrilling race between sisters for first place in the half-mile fun run started the morning, with Kathryn Busby, 8, finishing just ahead of Brooke Busby, 5, by one second. Kathryn’s time was 3 minutes and 53 seconds with Brooke at 3 minutes and 54 seconds. Third was Phillip Cressler at 4:54.
The 5K followed with a slowly intensifying mist and then drizzle falling as the lead runners came in. Anthony Nero of Spencer won in 18 minutes and 15 seconds, followed by Josh Readling in 19:07 and Caleb Steedly in 20:23.
The women were paced by Dr. Acquawon Stallworth in 22 minutes and 41 seconds. Stallworth has been concentrating on longer races recently, but is a regular force in women’s racing in the area. She was followed by Leah Cressler with a time of 23:53 and Ruth Beaver in 24:18.
Midway through the race, the rain began to fall more steadily, then became heavy as the final participants crossed the finish line.
Awards were held in the gym, and all proceeds will go to help Knox Middle School projects. All participants received a pair of running socks.
Race director Laura Zimmerman-Clark said, “I was hopeful of a good turnout, but worried about the daunting forecast all week. We had lots of race-day signups and were grateful to all who ran, volunteered and helped sponsor the race that helps our community. It was fun to see so many people out in their colorful socks.”
Sponsors were Biscuitville, Alan Burke CPA, Krispy Kreme, Salisbury Pediatrics, Food Lion, Knox Middle School PTA, Jersey Mike’s and Creative Teaching Aids.
Complete results can be found at www.salisburyrowanrunners.org