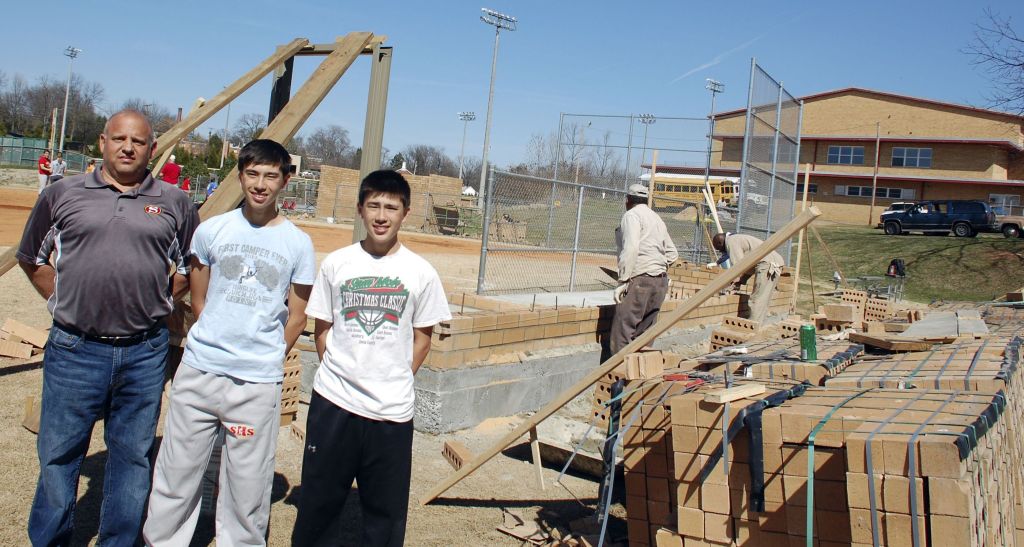 SALISBURY — You might see the new dugouts going up on the girls softball field at Salisbury High and think money for the project came out of the school system’s budget or from a generous foundation.
But the dugouts represent individual Eagle Scout projects by 15-year-old brothers Alex and John Yang, who are members of Troop 443 and sophomore baseball players at Salisbury High.
“I’m just so happy that they chose us,” girls softball head coach Leigh Miller says of the Yangs. “It’s crazy how dugouts can make you cry.”
While the Yangs have spearheaded the project — Alex’s official Eagle project is the visiting dugout, while John’s is the home-team dugout — it also has represented a partnership with the softball team, school construction classes, individual donors and generous local businesses.
Salisbury High construction teacher Scott Eagle — yes, “Eagle” is his last name — worked closely with the Yangs. He puts the total value of the dugouts project at $15,200.
Hardly chump change.
Figuring in donated materials, the actual cost came in at $7,800, still a sizeable amount.
“… The Yangs came along, and it was like they fell out of the sky with this idea,” an appreciative Coach Miller says.
Still under construction, the new dugouts are 22 feet long and 8 feet high. The home side also has a 8- by 10-foot equipment room attached to one end.
Previously, the softball players sat on benches which were uncovered and behind a chain-link fence.
Eagle says it could be plenty rough for players and coaches on a hot day, or as they played between rain showers.
Loyal to their school and its athletic teams, the Yangs purposely looked to combine their Eagle Scout projects with something on the Salisbury High campus.
“We wanted something that would be here a long time,” Alex says, “and we wanted to help our school.”
John Yang says Salisbury High was the only school in Rowan County without adequate dugouts for girls softball.
Their proposal led them first to Miller, then to Eagle, who also serves as an assistant coach for softball.
As part of their physical labor on the projects, the boys removed poles and sections of chain link fence, then helped with the framing for the concrete dugout floors.
Eagle arranged for buggies so the Yangs and other Scouts helping on the project could transport 12 yards of concrete from the Chandler Concrete & Building Supply truck to the spots where the dugouts were being built.
It was a long haul, because the truck had to park on the road beyond the outfield fence.
Taylor Clay Products Inc. donated 6,130 bricks for the dugouts themselves, and Chandler Concrete gave the boys better-than-market rates on all of its materials.
Each of the Yangs has more than 40 hours working at the field, not counting the time they spent in raising money.
They conducted a yard sale at their father Steve’s dental office, with items for sale donated by family and friends.
The Yang brothers also authored letters and made personal appeals to individuals for financial contributions. The letters spread as far as California, where the Yangs have some family.
“It was their decision to take it on,” Eagle says, crediting the boys for ordering materials, paying bills and arranging the work days.
Eagle is impressed with how diligent the Yangs have been and how willing they were to take on responsibility.
“A good group of young men” have worked on the project, Eagle adds, describing how the Yangs found others eager to help out.
John Yang says it makes the brothers proud to help their school and the softball team. They also like the idea of being able to return to the school long after they graduate and point to the softball field knowing they made the dugouts possible.
“It will be here after I’m gone,” Eagle says in agreement.
Eagle helped with the design and choosing of materials. Members of his construction classes also pitched in on the project.
The biggest obstacles were this past winter’s weather and the combinations of rain, ice and snow the dugout projects had to work around.
“We knew it was going to be a long, hard process,” Alex says.
The Yang brothers also play basketball for Salisbury High.
Over the past year, the girls softball team itself raised money by selling candy and discount cards, conducting car washes, having yard sales and leading scrap metal drives.
The players were able to pay for a new outfield fence.
Year by year, Miller is working hard to build a softball program at Salisbury High.
“We want more girls to come out for softball,” she says.
You never know, Miller adds, but things such as the new dugouts, an equipment room and an outfield fence — all things which show some support for the program — will help in recruitment.
It was always bothersome to Miller to see how much money and support the boys baseball team received for building Robertson Stadium, while her field still needed some improvements.
Meanwhile, Miller keeps telling her team that in life, as women, it’s OK for them to want more and strive for more.
“It’s just so important that what you do for boys, you do for girls,” she says.
That’s why dugouts can make her cry.
Contact Mark Wineka at 704-797-4263 or mwineka@salisburypost.com.