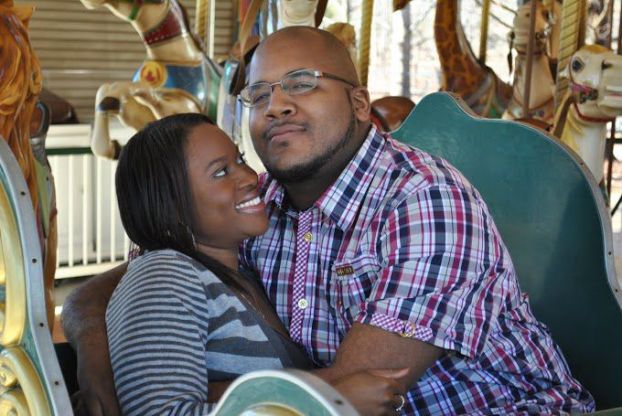 Budget — it’s likely the most often-repeated six-letter word when it comes to planning a wedding. In my every day life I’m a woman seeking the best deal for my money, and my wedding is no exception. According to statistics and wedding experts, a U.S. couple will spend an average of $25,000 or more on their wedding. Well statistics may say that, but my checkbook says “whoa … wait … what?!”

After becoming engaged in November to Vanzie Walker III, the next thing I did after squealing with excitement and calling friends and family was to come up with a budget. Together he and I sat down and decided what we’d like to spend on the cake, the venue, the food and the all-important dress.

In case you missed my last column, let me give you a recap. I’ve known Mr. Walker since I moved to Salisbury. His mother introduced us while we attended a church picnic at Dan Nicholas Park. He popped the question in November and I said yes.

Post columnist Mark Wineka suggested I chronicle my adventures or misadventures in a monthly column detailing my nuptials. He even came up with the name Altar Ego. It represents both sides of me — bride and crime reporter.

Everyone, including Post Editor Elizabeth Cook, told me to “make a budget and stick to it.”

Well, it’s easier said than done. So far we’ve been able to shift items around and still remain within our budget. But it ain’t easy plannin’ a weddin’. So far the best things I’ve learned along the way are to borrow and barter when you can and seek help from people you trust and know.

While planning this wedding we’ve reached out to the people in our lives who can help us or lend us their talents. My friend, Misty Stach, gifted us a fabulous engagement photoshoot. I met Misty in 2003 when we both worked for a newspaper in South Carolina. When I asked Misty if she would honor us by taking our photos, she didn’t hesitate.

Vanzie and I decided to keep it casual and have our pictures taken at the place where it all started — Dan Nicholas Park. We began on a sunny but cool Saturday morning. Our first stop was the carousel. I “rode” a horse and we looked lovingly into each others eyes as the carousel remained motionless. The ride wasn’t operating, but nothing wrong with pretending, right?

Remember when I said in my last column that I was a planner? Well, as soon as I knew we’d take our engagement photos at Dan Nicholas, I started planning where we could take pictures and what poses we could create. I have to say, some of my favorite poses turned out to be the ones we didn’t know Misty captured. I think the unrehearsed poses are the most beautiful.

My co-worker Andy Mooney agreed to help me design save-the-dates and programs. We’re even designing a custom monogram (and by “we,” I mean Andy). I know where my talents are and graphic design isn’t one of them. But Andy was kind enough to take on the task and based on his design and illustrations for the Post, I know it’s going to be fabulous. He designed the logo for this column series.

Another friend of mine, Kendra Lipscomb, has agreed to decorate the reception site for me in exchange for including my wedding in her style book when she launches a career in event planning. Kendra is also one of my nine bridesmaids. We know, nine is a lot. Her husband Keith is one of our groomsmen.

Just a little side note: Kendra and Keith have become Vanzie and my go-to married couple. They are both genuine people and they’ve shown us what it means to be in a marriage based on biblical principles, something Vanzie and I value. They are honest with us in their advice and remind us that marriage is going to be hard sometimes, but it’s based on love, grace, mutual respect, partnership, commitment, and has to be Christ-centered.

Bartering and borrowing have been some of the simplest ways to cut costs for this budget bride. In 2010, my good friend Cara Smith became Cara Mast. I was a bridesmaid at her wedding, and she’s also one of my bridesmaids. She and I have been friends since before Kelly Kapowski dated Zack Morris and Mr. Belding was balding (“Saved By the Bell” fans know what I mean).

I used to play at her house when I was little, and we both were on our high school soccer team. Her mom and dad — “Mama and Daddy Smith” — are like parents to me. When Cara and Mama Smith offered to let me use some wedding decorations, I immediately said yes and thank you.

In true planner fashion, we’ve done a lot since I last wrote, including picked our cake baker, a suit for the groom, dresses for me and my bridesmaids as well as taken engagement photos. We’re working on save-the-date cards because according to wedding planner Mindy Weiss and my co-worker Lori Simmerson, we are late. We have six months or 181 days until the wedding, according to my “Our Wedding” phone app.

In my last column I shared a few tips I’ve used from technology like the wedding app and Pinterest, which I love so much. In case you don’t know, Pinterest is a free online site that let’s you “pin” or post images to boards. I have a wedding board for this column, “Altar Ego — Wedding Planner,” where I pin ideas I like. The boards take me back to the website where the image originated.

The majority of the items from the site are disposable, aka plastic, but you don’t have to use it for a wedding. You can host a teen party, picnic, baby shower or any event where cost is a factor and you want to toss the plates when you’re done. The ribbon found on the site may find its way into my wedding.

• Be an innovator not an imitator. Think outside the box when it comes to ideas for your wedding. Pinterest is full of ideas, but perhaps so are you. Instead of cumbersome candlebras, see what you can do with pillars and columns. Instead of buying a veil, maybe you’re more comfortable with a headpiece similar to the one worn by Lady Mary in Downton Abbey. If you’re not sure what I mean, Google it. It’s exquisite.

• Do what you want, not what’s expected. Vanzie and I have decided to have a wedding cake, but with just two layers. The top, as tradition dictates, we’ll save. The bottom we’ll serve, and after it’s gone we’ll have cupcakes.

Our cake baker says cupcakes are the “in” thing now. It’s a different path than some weddings I’ve attended, but we like the idea. Up next: setting my hair and makeup appointments. I’m thinking about a weave or extensions. What do you think?

Shavonne Potts is a reporter with the Salisbury Post. She can be reached spotts@salisburypost.com or 704-797-4253. Find her Altar Ego Board on Pinterest

Looking back at the stories to remember from the past week: 1. WASHINGTON STATE COMMUNITY ANGUISHES OVER MUDSLIDE Rescue workers... read more