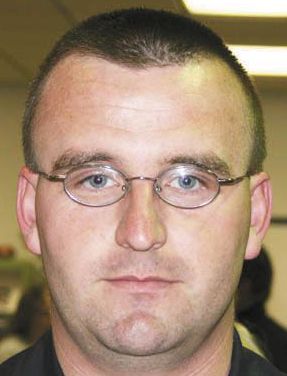 GRANITE QUARRY — A former police officer was ordered to surrender his law enforcement certifications this week after he was convicted of taking and selling a portable breath testing device from the Granite Quarry-Faith Joint Police Authority where he worked.
Darin Dearth, 33, of McCanless Road, was charged in March 2013 with felony embezzlement and felony obtaining property by false pretenses. On Wednesday, he agreed to accept an Alford plea for misdemeanor larceny. The courts dismissed the felony obtaining property by false pretenses.
In an Alford plea, the defendant does not admit the act, but admits that the prosecution could likely prove a charge.
Warrants say Dearth knowingly tried to obtain $100 from Anthony Paul Sharum by presenting an Alco-Sensor device as his own property when in fact it belonged to the police department. The device tests an individual’s breath to determine alcohol content.
Attempts to contact Dearth for comment were unsuccessful. His attorney, James Davis, did not immediately respond to a request for comment.
Dearth was given a year of unsupervised probation and ordered to pay $180 in court costs.
District Court Judge Charlie Brown also ordered Dearth to relinquish his law certifications through the N.C. Criminal Justice Training and Standards Commission and not renew it.
Dearth also had to cooperate with the administration actions taken by the Granite Quarry-Faith Police.
Police Chief Mark Cook said following the disposition of the case, Dearth was dismissed from the police department.
Dearth had not worked there since 2012.
According to a Police Department roster, Dearth had been with the Granite Quarry-Faith Police since 2002.
Contact reporter Shavonne Potts at 704-797-4253.