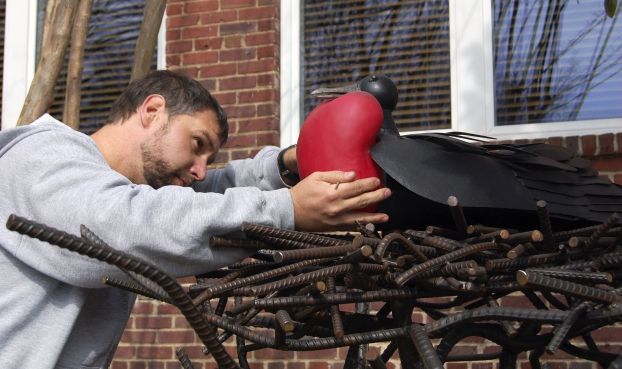 SALISBURY — Randy Goodman carefully guided a large, nesting bird through the air Friday on Easy Street.
Goodman was using his bucket truck to lift and lower the mass of bent rebar topped with a graceful bird into place, all under the watchful eye of artist Jason Lydic, City Planner Lynn Raker and F&M Bank facilities manager Nik Phelps.
Goodman, his assistant Randy Poston and Raker spent the day moving from one installation to another as the sixth annual Salisbury Sculpture Show slowly took shape throughout the downtown. The show features a dozen sculptures in the downtown area, one at Rowan-Cabarrus Community College and, if approved by City Council, four on East Innes Street at exit 76 — one at each entrance or exit for Interstate 85.
Other new locations include First United Methodist Church at 217 S. Church St. and Bank of America at 500 W. Innes St., where a bird with a 7-foot wingspan prepares to take flight.
Frannie Taylor, who is a contract project manager for F&M, and Stephen Chilingirian, Lydic’s assistant, also helped guide Goodman as he lowered “Beacon of Hope” into place on Easy Street. Lydic then installed the final touch — a red breast piece on the bird that will light up at night.
Lydic is one of four artists who have artwork in the sculpture show for the first time. Others are Matt Amante, Stephen Hayes and Chassity Miller. Once the sculptures are installed and photographed, organizers will publish a brochure with a map for easy identification, Raker said.
If approved, the four-piece installation at Interstate 85 will feature four metal sculptures, each about 16 feet tall including a narrow tripod. The sculptures are about 5 feet wide and all slightly different but similar in their design and bright colors, Raker said.
The Sculpture Show is funded with grants and private donations. Several pieces have been purchased by benefactors or donated by the artist and remain in the city, including three pieces by Jim Gallucci at the Hospice House, Norvell Theater and the city’s Community Services Center.
In addition to “Beacon of Hope” on Easy Street, the 2014 Sculpture Show includes:
• Jacob’s Ladder by Paris Alexander, Magnolia Park
• Semi-Circle Balance Study No. 12 by Amante, Rowan Library
• Geode by Jeannette Brossart, Rowan Library
• Tumble Gage by Gallucci, FUMC
• Wind Commander by Hayes, City Hall back yard
• Moonscape by Hanna Jubran, Depot
• Fall & Winter by Hanna Jubran, Vantage South Bank
• Swooping II by Doug Makemson, Bank of America
• Intrusion by Harry McDaniel, St. John’s Lutheran Church
• Faun Dance by Harry McDaniel, Trolley Barn
• Pod by Miller, RCCC
• ZigZag Boogie Woogie by Bill Wood, Rowan Library
• Salisbury Foursome by Robert Winkler, I-85 Exit 76